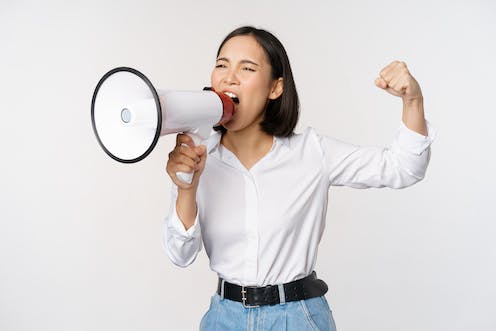 Nations and players, and even a number of French cities have criticised Fifa’s decision to award the 2022 men’s football World Cup hosting duties to Qatar. But when a company does the same, it can run the risk of being accused of “greenwashing” or even “wokewashing” – that is, taking an inauthentic stand on a cause to benefit sales.

Some companies have been openly critical of the host country. But, for many companies, the money to be made from TV rights, merchandising and corporate sponsorship still makes the association worthwhile.

Fifa sponsors pay from US$10 million (£8.2 million) upwards, meaning the rights tend to be divided up among major global corporations vying for a slice of the profits. Smaller companies don’t tend to be able to compete with the sponsorship buying power of these brands.

Read more:
World Cup 2022: Qatar is accused of ‘sportswashing’ but do the fans really care?


So how can a much smaller company get a piece of this action? It might take a leaf out of UK brewery BrewDog’s public relations handbook. In the run-up to the tournament, it dubbed itself an “anti-sponsor of the World F* Cup”, with plans to donate profits from one of its lagers to human rights causes.

In a post on LinkedIn, BrewDog co-founder James Watt said:

If we are only prepared to accept ethical stances from businesses or individuals who have no conflicts, we’ll be waiting forever, and we’ll all be giving tacit approval for things that are just plainly wrong in the world.

So, announcing itself as a corporate anti-sponsor appears to be a clever way for this growing company to highlight its corporate stance on certain issues and attract consumers with shared values, while still linking into World Cup discussions, activity and excitement. But is it authentic?

Founded in 2007, BrewDog has been vocal about its aim of shaking up the brewing industry. Previously, it has created a marketing strategy around the climate crisis, with carbon-negative products sold as decreasing its customers’ carbon footprints.

But BrewDog has also been caught up in several controversies around its own operations that could also call its corporate activist credentials into question. This includes accusations of a toxic workplace culture made by former employees, to which Watt posted a response on twitter in June 2021. Referring to an open letter that the former employees tweeted about their concerns, Watt called it “so upsetting, but so important” and said the company would take action as a result. He added:

We are committed to doing better, not just as a reaction to this, but always; and we are going to reach out to our entire team past and present to learn more. But most of all, right now, we are sorry.

The company has also recently given up its status as a B-Corp, which is a certification that a company meets high standards around environmental and social performance. When asked about this issue by The Conversation, a spokesperson for BrewDog said: “A comprehensive independent culture review was conducted last year, and we have put in place numerous measures to help us achieve our goal of being the best employer in hospitality, bar none. We let our B Corp certification lapse for a number of reasons.”

BrewDog’s World Cup stance highlights the complicated balancing act involved in pulling off corporate activism successfully. Research shows that taking a stand on a controversial topic that generates both positive and negative feedback is one of the numerous differences between corporate activism and corporate social responsibility.

The latter generally sees brands supporting issues that are not controversial within their specific market. For example, a bottled water company campaigning for clean water standards or funding water-related humanitarian projects. On the other hand, a chocolate company lobbying for a sugar tax would be classed as corporate activism.

As such, corporate activism goes much further than typical corporate social responsibility stances, according to research. Corporate activism also involves both messaging and actions that show a commitment to a socio-political cause that are made to create change. Such actions help a company to go beyond advocacy to achieve authentic corporate activism.

The risks of corporate activism

Unsurprisingly, it can take years for brands to garner a reputation as an authentic corporate activist. Taking a stand is also risky business. A company could alienate consumers who disagree, affecting sales. It could also be highly scrutinised by the public who may agree with the broad themes that are being discussed, but disagree with methods, actions and messaging.

The latter is when accusations of greenwashing and wokewashing abound. This is particularly the case when there is a perception of a brand jumping on the bandwagon of a popular issue. Research shows that publicly addressing perceptions of authenticity is central to how brands will be received in the market. When words do not correlate with actions, brands are likely to be called out.

An example of authentic corporate activism is outdoor apparel brand Patagonia, which has managed to achieve a balance between purpose-driven messaging and practice. At the risk of lost revenue, Patagonia closes stores on election days to allow staff to vote and donated a corporate tax cut to environmental organisations. But no one is immune to criticism – Patagonia’s recent corporate restructure has been criticised over allegations that they were benefitting from a tax break, for example.


So what can BrewDog do to prove its mettle as a corporate activist? It has shown World Cup matches in its bars, but the brewer’s spokesperson told The Conversation: “Many organisations and individuals expressed outrage about staging the World Cup in Qatar, but none of them boycotted the event itself, and neither did we.”

Otherwise, BrewDog has pledged the profits from one of its products – Lost Lager – to human rights causes. In my opinion, asking consumers to buy a specific product, rather than corporates donating directly to charity, shows a disconnect between corporate messaging and practice. But the BrewDog spokesperson questioned the sense in “trousering those profits and instead putting the onus on customers to make donations”.

But donating profits from one beer to human rights causes puts the emphasis on the consumer to choose that product if they care about the issue. Asking people to donate to a charitable cause can be authentic if it is supported by corporate fundraising such as a donation match.

BrewDog will announce the amount raised and the charities that will be receiving donations at the end of January. Final judgement should be reserved until then, but its stance so far certainly looks like an example of inauthentic corporate activism.

Samuel Jones does not work for, consult, own shares in or receive funding from any company or organisation that would benefit from this article, and has disclosed no relevant affiliations beyond their academic appointment.