MP calls for answers to cause of Brixton Academy ‘crowd crush’ 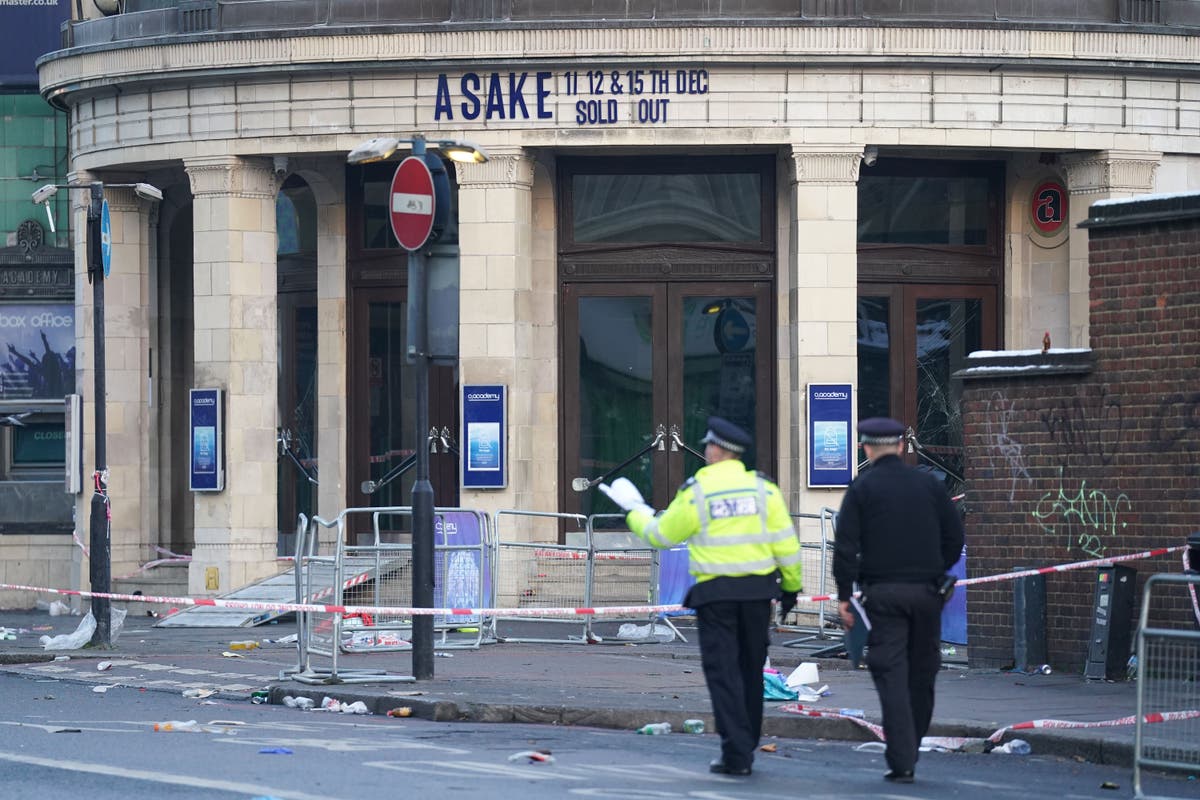 n MP has called for answers to what led to a suspected crowd crush at a concert at the O2 Academy Brixton, stating that “ticketing and security procedures have not performed as they should have”.

Three people are in a critical condition and one person has been arrested following the incident where a large crowd attempted to gain entry without tickets to a show by Nigerian artist Asake at the south London venue.

The singer has said he is “praying” for those injured on Thursday night.

Florence Eshalomi, Labour MP for Vauxhall, said in a statement posted on Twitter: “It is very clear ticketing and security procedures have not performed as they should have for this incident to have occurred.

“We need answers about exactly how this happened and safeguards against it in future. This will be fully investigated by Specialist Crime detectives, supported by Lambeth Council’s Licensing Unit.”

She added: “This is a deeply concerning incident and has turned an experience which should have been a celebration into a very sad day.

“My thoughts are with those caught up in the crush last night, in particular those that remain in hospital. My central hope is for their full recovery.”

The Met Police confirmed that three women, aged 21, 23 and 33, remained in south London hospitals in a critical condition on Friday evening.

A spokesman said: “Their next of kin have been informed and are being supported by specialist officers.”

He added that police were initially called at 9.04pm and officers attended at 9.11pm, earlier than the previously stated time of 9.35pm.

The spokesman said: “Working alongside venue staff, some of our officers provided CPR and emergency first aid until the arrival of paramedics.

“Eight people were taken to hospital with what are believed to be crush injuries.”

The spokesman added that the incident had been referred to the Independent Office for Police Conduct under standard practice following incidents where police had been in attendance and members of the public had been seriously injured.

He said: “I’d like to extend my sympathies to all those who have been affected by last night’s incident and those that have been injured. Having seen some of the really upsetting images on social media our thoughts are with them.

“An urgent investigation is currently under way led by detectives from our Specialist Crime Command and cordons remain in place as officers continue to work at the scene.

“This is still a fast moving and evolving picture and we are working to establish the events that led up to last night’s incident.

“We are also aware of a vast amount of footage on social media and of course this will be examined as part of the investigation along with footage from officers’ body worn video cameras.”

The force spokesman said that video footage on social media showing an officer pushing a woman from the steps had been assessed by the Directorate of Professional Standards and said there was “no evidence of misconduct”.

He said that another woman was arrested for assaulting an officer.

He added: “We are aware of a video on social media showing a dog in the venue but we can confirm that there were no police dogs or police dog handlers at the scene last night.”

Asake, whose real name is Ahmed Ololade, said in a statement on Instagram: “My heart is with those who were injured last night and caused any form of discomfort. I pray you get well soonest.

“I am also in the process of reaching out to individuals.

“I still do not have the full brief from the venue management themselves as to what led to the disruption at the entrance of the Brixton Academy, but we are thankful that all was peaceful at the end.

“For my people who enjoyed the beginning of my performance, I am sorry that it was cut short.

“Thank you for your unbelievable love, London. I love you too much! I’m looking forward to seeing you again in a bit!”

Asake was recently nominated for BBC Radio 1’s Sound of 2023 award, for artists breaking through in the UK.

Ahead of the gig, he had posted on Twitter asking fans not to come to the venue unless they had a valid ticket.

The concert was the third of three sold-out dates at the 4,921-standing capacity venue and concluded a run of UK dates.

Footage posted online showed large crowds outside the building on Thursday night, with many people holding up mobile phones and filming the scene.

In other video content, the crowd inside the venue could be heard booing when an announcement was made from the stage saying the show was being stopped.

A woman involved in the crush, who spoke to the BBC after being admitted to hospital with suspected internal bleeding, said: “I couldn’t breathe and I completely passed out. I thought I was dead.

“I took my last breath and I could not get any more oxygen. I was so scared.

“I was just queuing up to give them my ticket and then the crowd out here was insane, they just came and pushed and I just fell down.”

John, 32, who lives next to the O2 and declined to give his surname, said police arrived after the gig was cancelled.

“I saw everyone at the front door of Brixton Academy, (then) everything just stopped,” he said.

“It looked like the gig had been cancelled, and then some commotion, some pushing and shoving, and the police came shortly after. That’s when it kicked off and became aggressive.”

He added: “You could tell there was tension.”

He said people trying to get into the O2 had broken the glass of the front doors.

“People at the front of the Brixton Academy were really pushing and shoving and trying to break through the door and force their way in,” he said.

“The glass of the doors was broken.”

Mayor of London Sadiq Khan tweeted that his “thoughts are with all those affected by the awful incident at Brixton Academy”.

Belgian act 2manydjs have postponed their gig at the venue on Saturday, with a new date set for February.

The group posted on Twitter: “It is with pain in our hearts that we have to announce that due to the terrible events that happened at O2 Academy Brixton last night, we are being forced to postpone tomorrow’s show.”

Asake was described on the venue’s website as “one of the hottest breakout stars from Nigeria” and is touring his debut album, Mr Money With The Vibe.

2022-12-16
Previous Post: Asylum claim rejections show the UK government has little understanding of what people are fleeing – and it’s costing lives
Next Post: Nuclear fusion may still be decades away, but the latest breakthrough could speed up its development