Chinese economic growth may never recover from COVID – here’s why 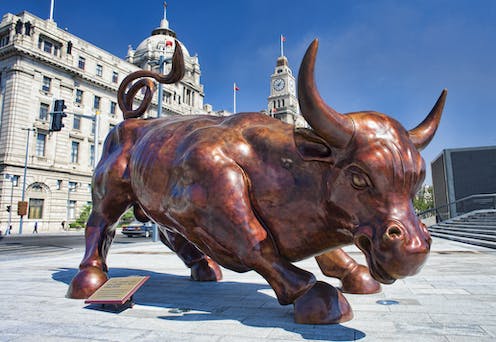 Many countries have had to navigate the balancing act of keeping the economy alive versus protecting citizens from COVID in recent years. In China, patience with its zero-COVID policy – one of the world’s toughest strategies for dealing with the pandemic – are wearing thin among workers and students. Sporadic protests have erupted all over China in recent weeks, triggered by the deaths of ten people in a fire in an apartment block in Ürümchi, Xinjiang in November.

But even with signs that restrictions are starting to relax across the country, the impact on the economy will not be as straightforward as the Chinese government might hope.

The conundrum for China is that the state has promised its citizens safety from the virus through its zero-COVID policy, which has led to large sections of the vulnerable population being unvaccinated. No government wants to concede it may have been wrong about something, but it’s particularly important for the credibility of the social contract between the Chinese Communist Party and the people. The authorities guarantee social and economic stability and the freedom to get rich, in exchange for absolute power.

The upside of authoritarian governance is that decisions can be made quickly in times of crisis. The Chinese government was quick to react to the 2008 global financial crisis with a 4 trillion yuan (£470 billion) fiscal package. After a sharp fall in GDP in 2008, the economy grew by 8.7% in 2009 and over 10% in 2010. The rate of growth then settled at a healthy but sustainable 6.8%.

When dealing with the pandemic, after the initial confusion about its source and apportionment of blame, the government acted swiftly to lock down the economy and flatten the curve. The result was that only 5,233 COVID deaths had been reported as of December 2022, compared to 1.1 million in the US.

But daily COVID cases in China were at 37,828 on November 30 2022. This is higher than the peak in April when the economically damaging lockdown in Shanghai was imposed. And GDP fell by 2.6% in the second quarter of this year before recovering with a 3.6% rise in the next quarter.

So clearly there is a trade-off to consider between the economic and social cost of China’s zero-COVID policy and the health benefits for the vulnerable. This means it’s important to consider the short-term cost of the lockdown, as well as any long-term consequences.

The immediate costs have been the disruption to production and global supply chains, but the domestic service sector was also particularly hard hit. The chart below shows how economic growth has moved from a steady quarterly rate of 1.7% following the 2008 global financial crisis, to a collapse and recovery in 2020 and a second downturn in quarter two of 2022.

Growth in China from the global financial crisis to COVID

The likely long-term economic impact is the uncertainty caused by policy changes, which has affected domestic and foreign investment and caused supply chain disruption. Real GDP per capita (real GDP divided by the population) is projected to grow at 6.3% a year in China and, according to my calculations using Federal Reserve Economic Data (FRED) and population figures from the World Bank, this would put the cost of long-term lost output at a massive 72% of real GDP per capita relative to 2018 GDP.

This is a huge loss for the Chinese economy and research shows that output loss on this scale is rarely recovered in the long term. Foreign firms are rethinking their supply chain arrangements and the all-important human capital brought by foreign workers to China has been heading for the exit. As with after the financial crisis, the pandemic could lead to a new, lower trend growth rate that will only emerge with time.

Of course, repositioning supply takes time and China is secure in the knowledge it remains the workshop of the world for now. But there are other headwinds: debt to GDP rose to 270% in 2020 driven by credit advances to real estate developers and also to local governments for infrastructure spending.

Central government debt as a percentage of GDP has also risen from 20% in 1998 to nearly 70% in 2020. Government debt is set to rise to 78% in 2022. These are large figures for an emerging economy. And if China is to keep to its promise of protecting its vulnerable citizens, higher spending on health for its ageing population could cause this debt ratio to rise further.

The pandemic has raised government spending in China, as it has done in all countries. This has created business opportunities, but has also highlighted a difference between local government decision making and central government edicts. Sometimes, an overcautious regional response goes beyond the guidelines set by central government – for example, when provinces enforce longer lockdowns than the recommended five days, or impose centralised quarantines rather than asking people to stay at home. This also affects the economy and must be taken into account by China’s government.

But of course, this is not just about economic costs, people’s wellbeing and health must also be considered. And things may even be worse in China than observers realise – recent research suggests that autocratic governments can overstate economic growth by as much as 35%.

China’s anti-COVID protests are more than about COVID. They are expressions of frustration with a system that is opaque and unaccountable. Relaxing the restrictions is a step in the right direction, the effect depends very much on the decisions the government makes from now on.

Kent Matthews received funding from ESRC-Newton to examine the role of Shadow Banking in China.

2022-12-07
Previous Post: Code-switching: the pressure on people to change how they speak
Next Post: Ian Blackford resigns: five times the SNP’s leader in Westminster used parliamentary rules to shake things up