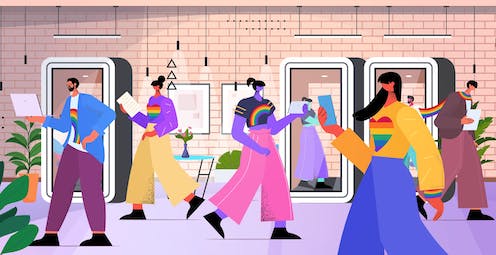 The process for applying for a gender recognition certificate in the UK has become easier and cheaper due to government changes in recent years. There has been a slow increase in the the number of people applying as a result.

It is also likely to become even easier to get a certificate in Scotland, where changes to the law governing gender recognition are currently being debated. This will have a knock-on effect for businesses by boosting the participation and visibility of transgender people in the workplace.

But it’s not just legislation that needs to change. Alarmingly, one piece of research found that almost a third of employers said they would not employ trans people, with 74% stating they have never knowingly worked with a trans person.

Other research shows 30% of LGBT+ people believe senior management would be more likely to promote non-LGBT+ colleagues because they have more in common with them, while 28% say they have been actively discriminated against in the promotion process. A further 62% believe they have to code-switch and act “straight” in order to progress at work.

It’s unsurprising then that half of trans people hide their identity at work for fear of discrimination, according to a report by LGBTQ+ rights charity Stonewall. As such, as workplace diversity continues to increase, creating a more welcoming company culture should be a priority for businesses.

A diverse workforce can bring many benefits. It fosters innovation, as well as different ways of thinking and acting, providing a competitive edge. Unsurprisingly, organisations with trans-inclusive workplace policies tend to employ more trans people and are therefore more diverse places to work. But research by the Trades Union Congress shows one in five workplaces still do not have LGBT policies.

Recognising this, campaign groups and international organisations like the UN are increasingly promoting best practice for creating more inclusive workplaces. Companies are also being confronted by regulations and rulings in favour of trans employees that have experienced discrimination.

In a 2017 employment tribunal case, de Souza v Primark, the employee was awarded over £47,000 for constructive unfair dismissal and direct discrimination on the grounds of gender reassignment based around her preferred name being used at work and the reaction by staff members to this request.

As well as awarding compensation, the tribunal recommended that the employer, the Irish retailer Primark, should:

In line with such rulings, as well as the updates to the gender recognition application process, HR departments can play a key role in shaping and moulding workplace culture to support trans employees’ needs. The focus should be on making everyone feel welcome in the workplace.

oiLloyds Banking group has implemented such policies, including social media campaigns, flying pride flags at 35 of its main locations, promoting Transgender Day of Visibility and creating an LGBT+ colleague network.

But it’s also important for companies to avoid the “empty shell hypothesis”. This is when equal opportunities policies contain nothing of substance or value to the victims of discrimination. To combat this, organisations need to take a continuous approach to instilling the right culture.

To do this, HR departments can:

Getting advice from trans people, trade unions and expert third parties can help make such policies fit for purpose. And any changes should cascade throughout an organisation so they are fully implemented. With company policies embedded at all levels, as well as the use of networks and workplace champions, reinforcing cultural change in this way should provide ample support for all employees.

2022-11-30
Previous Post: Four tips to avoid your office Christmas party turning into a superspreader event
Next Post: Black and minoritised ethnic communities at disproportionate risk of homelessness in the UK