FTX contagion will be ugly within crypto, but probably less damaging to the wider world 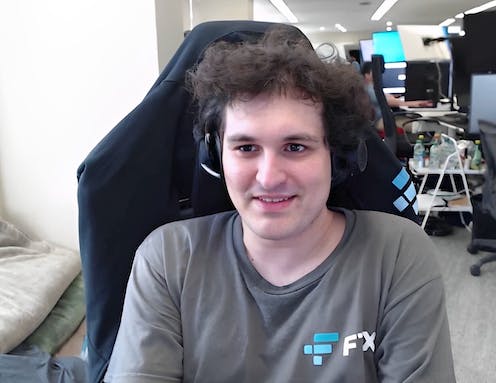 Crypto assets are infamous for being highly speculative and volatile, but it is their “debt problems” that have once again made headlines. Since November 2021, the total value of cryptocurrencies has now fallen from a peak of over US$3 trillion (£2.6 trillion) to circa US$830 billion (£706 billion).

This has coincided with a major downturn in global markets due to interest rates going up, but falling prices also reflect a series of collapses and bankruptcies within the industry. These include the Terra Luna blockchain, lender Celsius, the Voyager exchange/brokerage, hedge fund 3AC, and now also FTX/Alameda, which has just filed for bankruptcy.

The collapse of FTX, the world’s second largest crypto exchange, concerns a liquidity crisis. This is where a company doesn’t have enough cash or its assets cannot be converted to cash quickly enough to satisfy demand.

In the case of FTX, there had been concerns about the closeness of its relationship with its hedge fund sister company Alameda. These boiled over when rival exchange Binance announced a few days ago that it was sufficiently worried to unload US$500 million of holdings in the FTX native cryptocurrency FTT.

Panicked investors began selling FTT and related cryptocurrencies quickly, leading them to plummet in value. Alameda tried to buy enough FTT to keep prices up, but ran out of firepower. FTT fell to ruinous levels, doing severe financial damage to Alameda and FTX.

In parallel, frightened FTX customers withdrew US$6 billion from the exchange in just three days. FTX then halted withdrawals, having apparently lent the rest of customers’ money to Alameda, trapping customers with holdings worth billions more on the exchange – perhaps permanently.

With numerous major FTX investors like BlackRock, Ontario Teachers Pension Fund and Sequoia Capital also in line to lose all their money, chief executive Sam Bankman-Fried (SBF) is reportedly trying to raise US$9.4 billion. Ominously, Binance initially expressed interest in buying FTX but pulled out after looking at its rival’s finances.

Will anyone else rescue FTX? This could happen by institutional investors buying lots of FTT to drive its price back up, or pumping US dollars into the exchange to reassure customers and allow them to withdraw their money.

In research that I conducted with colleagues, we showed that investing in recent “losers” like FTT can be a profitable strategy in the short term. They tend to have higher returns in the week after a sharp fall than previous strong performers.

Overall, however, a rescue seems unlikely. It would be very risky to attempt to rescue an exchange that potentially has no fundamental value. Market sentiment also remains negative because of the economic backdrop: US inflation may now have peaked, suggesting interest rates will stop rising, but it’s still early days.

The contagion in the crypto industry could be ugly. Various crypto investment firms like Genesis and Multicoin Capital have confirmed they have large sums of money trapped on FTX.

The other issue is Alameda, which is soon to be defunct. It appears to owe multiple billions of US dollars in trading money borrowed from lenders besides FTX, which will probably not be paid back. This could cause solvency issues elsewhere. Crypto bank BlockFi, which was itself rescued by FTX following the Luna collapse earlier in the year, has already halted customer withdrawals.

As for crypto prices, bitcoin has fallen from about US$21,000 to as low as the mid-$15,500s before recovering to above US$17,000 at present. With many smaller cryptos falling even harder, expect further selling as players hit by FTX move their investments into dollars to stay afloat.

Worse still, Alameda is one of crypto’s largest market makers, a crucial role in financial markets which involves taking the other side of a trade to enable buyers and sellers to transact. At a time when more selling is likely, reduced trading liquidity could drag prices down even further, potentially creating a wider stampede.

Nonetheless, an FTX/Alameda bankruptcy may not see bitcoin completely collapse in price. Because it is more decentralised than other crypto assets, meaning its not controlled by any single entity, investors may to some extent swap it for their other cryptocurrencies rather than buying US dollars. Overall, JP Morgan reckons that bitcoin might drop to US$13,000 in the weeks ahead, suggesting we’re not too far from the bottom.

It’s also worth noting previous findings from my team that the amount of stablecoin Tether in circulation is a good indicator of future crypto prices. This bottomed in the summer and has not dropped significantly recently.

Could FTX contagion also threaten overall financial stability, similar to the Lehman collapse in 2008? Generally, cryptocurrencies are not yet considered a serious threat to global financial stability since they are still poorly linked to real economic activities beyond the financial sector.

However, if large institutional investors exit crypto altogether and sell bitcoin and other tokens en masse, crypto prices could fall even harder and lead to increased spillover. Other crypto investors would take another hit and spend less in the wider economy as a result, or sell non-crypto holdings like shares to cover their losses.

Based on our analysis of liquidity, Canadian, US and EU stock markets are more closely linked to crypto than Chinese and Japanese stock markets. Therefore the reaction of these markets to cryptocurrency problems would be more pronounced.

Overall, however, FTX is still probably much more of a crypto problem than a wider problem: it’s the story of how disastrous financial management by FTX and its rivalry with Binance has threatened the stability of the cryptocurrency markets. We’ll be watching closely to see how the contagion plays out in the coming weeks.

Larisa Yarovaya does not work for, consult, own shares in or receive funding from any company or organisation that would benefit from this article, and has disclosed no relevant affiliations beyond their academic appointment.

2022-11-11
Previous Post: Organisational Development Administrator (Part-Time)
Next Post: Permacrisis: what it means and why it’s word of the year for 2022