Rising interest rates: why the Bank of England has increased rates again and what to expect next 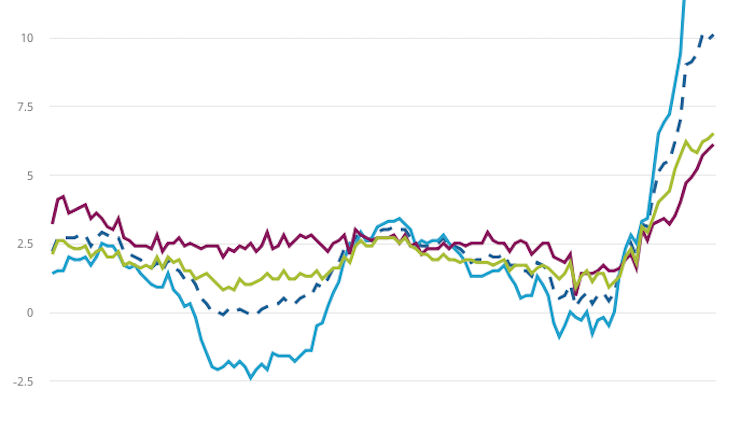 The Bank of England has increased UK interest rates by 0.75%, the biggest increase in 30 years. A year ago the interest rate was 0.1%, today it is 3%.

While the speed of the increase is certainly surprising by historical standards, the actual level of interest rate is not: before the 2008 global financial crisis, we would need to go all the way back to the 1950s to find interest rates so low. Indeed, the current 3% interest rate figure is only high compared to the past 14 years.

The Bank of England has increased interest rates as quickly as it has this year because of inflation. It has a clear mandate to maintain price stability. This has traditionally meant trying to keep inflation at around 2%, meaning that consumer prices, on average, should increase by 2% every year.

Sometimes inflation deviates from this target, of course. And small, short-lived fluctuations are fine. But inflation has been above target since mid-2021 and is now actually at a 40-year high of around 10%.

When this happens, central banks use interest rate increases to help bring inflation down. Higher interest rates make borrowing more expensive, which means less available income – for people and businesses – and more incentive to save, both of which reduce consumption.

The impact of raising rates

Higher interest rates can also boost a currency because investors are encouraged to bring money into the country to benefit from higher returns. When the pound is strengthened in this way, imports become cheaper for British households.

But these actions require a delicate balance – the same mechanism can also lead to a recession because lower consumption causes firms to produce and hire less. This is what the Bank of England has forecast for the UK for the next two years.

Economists, however, are not particularly good at forecasting the path of the economy. Sometimes we only discover a recession has occurred after the fact. So, while forecasts are important, they are not to be taken as fact.

Read more:
Is the UK in a recession? How central banks decide and why it’s so hard to call it


The main issue for the Bank in trying to control inflation right now is that it has been partly caused by the Russian invasion of Ukraine, which has led to high energy prices. This increases the cost of many other products, as well as raising the average cost of the basket of goods used to calculate inflation. When inflation is caused by outside factors in this way, it is unlikely that changes in consumption in the UK can affect those prices.

So, if some causes of inflation are outside the Bank’s control, why is it hiking rates to address inflation? Well, energy prices are only one of the drivers behind high inflation. Even when inflation is fuelled by external factors, as long as it is sufficiently persistent, it will eventually be driven by internal factors as well.

This is because companies and households change their expectations, adjusting wages and prices to reflect the new situation of higher inflation. As mentioned, it is not only energy prices that are now rising: core goods and services prices, excluding energy and food, show inflation rates of around 6%.

Prices are rising for most goods and services

With this in mind, what can we expect from the Bank of England next? While it says the UK is already in what is likely to be a long recession, the Bank does expect inflation to decline sharply next year. This does not mean a lower cost of living, but it does mean that prices will increase at a slower rate than in the past year.

And while financial markets are currently forecasting interest rates of around 4.75% next year, Andrew Bailey, the governor of the Bank of England, has said there might not be a need to increase interest rates that much.

In fact, the Bank presented two different scenarios for its latest forecast: one in which interest rates increase in line with market expectations, and one where they do not increase again. The differences between the two with respect to inflation were minimal and, unfortunately, both indicate a long recession. But the Bank does not usually feature an alternative scenario so prominently in its reports, so it may be trying to signal that it at least hopes to stop raising interest rates soon.

Unfortunately, uncertainty remains very high. While it has been criticised for acting too slowly to stop recent spiralling inflation, the Bank of England has acknowledged the amount of uncertainty it is currently dealing with – the “unknown unknowns”.

Energy prices may keep rising, particularly if the war in Ukraine continues, and supply chain constraints might tighten up again if armed conflicts start in other parts of the world, or if pandemic-related restrictions are further tightened in countries like China.

This means that there can be no promises regarding future interest rates. But it does seem clear that the Bank of England does not expect to raise interest rates by 3% again next year.

Francesc Rodriguez-Tous does not work for, consult, own shares in or receive funding from any company or organisation that would benefit from this article, and has disclosed no relevant affiliations beyond their academic appointment.

2022-11-07
Previous Post: Girls are held up as figureheads of political change, but they don’t want to do it alone
Next Post: 1962’s Sino-Indian border war lasted four weeks – internment of India’s Chinese community lasted years