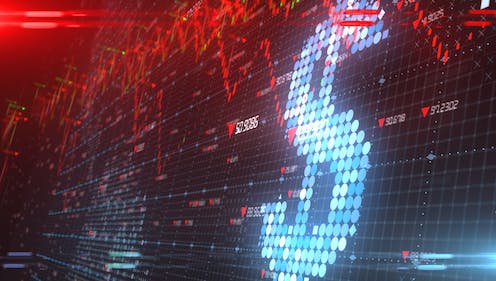 Countries across the world are drifting towards a debt crisis. Economic slowdowns and rising inflation have increased demands on spending, making it almost impossible for many governments to pay back the money they owe.

In normal times, those countries could simply take on new debt to replace the old debt. But international conditions have made it much more difficult to do this.

As a result, some of those approaching repayment deadlines will simply not be able to meet them. Sri Lanka and Zambia have already missed payments, throwing both countries into an economic tailspin, and offering perhaps a preview of impending global problems.

One of the main reasons for this worrying scenario is that countries across the world are essentially compelled to borrow money in US dollars or Euros, and keep foreign currency reserves for future debt payments.

But those reserves face other vital demands. They are needed to purchase oil and other imports, and well as maintaining the credible value of their domestic currency.

Unfortunately for many emerging economies, the reserves they hold are simply not enough to cover all of these demands – especially after energy prices soared when Russia invaded Ukraine.

At the same time, foreign currencies have become more expensive to buy because the US Federal Reserve and the European Central Bank are raising interest rates. Sri Lanka reportedly has no reserves left, while Pakistan is said to be operating on a month-to-month basis.

Countries usually issue new bonds (think of them as tradeable IOUs) to roll over old debt, a process that works just fine – until it doesn’t. In July 2022, no emerging countries issued any new bonds, indicating that investors are alarmed by the risk of low currency reserves, and are no longer interested in lending to them.

China too has scaled back its lending since the beginning of the pandemic to limit its exposure to global risk. So without bond markets or China, countries are turning to alternative sources of credit.

Kenya and Ghana for example, recently took out bank loans to alleviate budget shortfalls. And while the precise terms of these loans are not known, banks usually demand higher interest rates and shorter repayment periods, which may only add to a country’s financial stress levels.

Other countries are turning to some of the oil-rich gulf states currently profiting from high energy prices. Egypt and Pakistan have received loans from Saudi Arabia, the United Arab Emirates (UAE) and Qatar, while Turkey has also borrowed from the UAE. These loans may be welcome lifelines, but they also create opportunities for richer countries to effectively buy influence and generate dependency.

Overall then, a multitude of factors are working against some of the world’s poorest and indebted countries. If a global debt crisis does ensue, expect political turmoil to follow.

But it is not too late for the international community to help avoid such a scenario.

First off, the US and the EU should slow down their interest rate hikes. These US and EU rate hikes slow economic growth around the world, as the United Nations warned, and they are draining countries’ foreign currency reserves.

It is also not clear that these interest rate hikes are addressing domestic inflation problems. If wealthier countries wish to lower inflation without igniting a global debt crisis, they should lower the trade barriers that artificially raise prices. For example, both the US and EU levy tariffs on imported agricultural products, which increase the price of food for their consumers.

Second, the International Monetary Fund (IMF) should drop or at least soften the austerity requirements linked to its emergency lending. For example, Zambia’s new IMF deal requires lower government subsidies on fuel and food at a time when prices are increasing. These policies are politically unpopular and encourage countries to seek help from China and oil-rich states instead.

Those countries that are compelled to borrow from the IMF face the risk of emboldening extremist political elements. Now is not the time to push orthodox fiscal requirements that are questionable in their effectiveness. Instead, the IMF should prioritise global liquidity during these difficult economic conditions.

Finally, China should take a leading, transparent role in debt negotiations. Many of the countries facing debt problems owe money to China, a process often shrouded in secrecy.

We know, for instance, that China has agreed to participate in restructuring negotiations in Zambia but has not done the same in Sri Lanka. China has provided emergency loans and debt relief to Pakistan and Argentina, though the effectiveness or extent of this aid is unknown.

A more transparent approach would reduce uncertainty in global markets and allow other creditors to coordinate with China. While China’s lending has not been transparent up until this point, more clarity would benefit China’s overseas investments as well as the global debt market.

Time is running out before many debt distressed countries face repayment day. Debt problems are contagious, as was seen with the Latin American debt crises of the 1980s, the Asian financial crises of the 1990s, and the Eurozone debt crises of the 2010s. The global community should work together to avert another global economic spiral, and help millions of people avoid needless suffering.

Patrick E. Shea does not work for, consult, own shares in or receive funding from any company or organisation that would benefit from this article, and has disclosed no relevant affiliations beyond their academic appointment.

2022-10-26
Previous Post: Kevin Bacon kidnapped by Guardians Of The Galaxy in new Holiday Special trailer
Next Post: Scottish independence: how Nicola Sturgeon’s pledge to rejoin the EU could impact a referendum vote