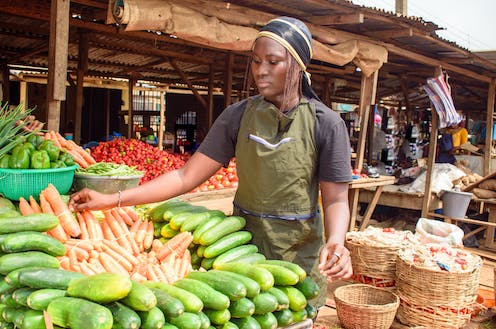 As the global population grows, it has been estimated that by 2030 the world will need more than 600 million new jobs. Many of these will be required in developing countries, where young people already struggle to find work, pay is low, and working conditions are often poor.

With few opportunities for decent work, many of the world’s poorest young people are self-employed or start their own businesses. Indeed, the World Bank considers small- and medium-sized enterprises (SMEs) to be a key element of new employment opportunities in lower-income economies.

But starting a business anywhere is fraught with risk. Failure rates are as high as 75% in Ethiopia and Rwanda, 74% in Ghana, and 67% in Zimbabwe.

Failure is more likely where interest rates are high and when prospective entrepreneurs lack collateral, which blocks proper financial support – a vital part of the survival of new businesses and the new jobs they can create.

Unfortunately, secure financial support is not as widely available as it might be. In developing countries, just 15% of young people have saved money with a formal financial institution. Our survey highlights the varied experiences of young people (under 35) from low-income communities using financial services.

And it’s not only support for start-ups that our survey shows is lacking – we also saw a more basic failing of the financial sector for individuals, and particularly women.

Many of the people we surveyed (from 21 countries including Sri Lanka, Sierra Leone and Malaysia) preferred to take a more informal route to getting money. Around 83% said they turned to their family for financial support, 16% to community savings schemes, and 9% to informal money lenders.

For some, the financial services (both informal and via traditional banks) they receive have a positive impact – but for others, they can be ruinous. The failure to pay back loans can lead to some young people fleeing their homes.

And while formal finance might seem like the safer option, we found a widespread lack of trust in formal financial services. Most (62%) did not want to get involved with formal banking, while nearly a third (30%) had little money to spend and nothing to save, rendering financial services irrelevant. Almost half (45%) had never considered traditional financial products and services to be relevant.

Other major barriers to formal banking include lack of documentation or collateral. There may also be prohibitively high interest rates to contend with.

Overall, our survey indicates that young people value the security and predictability that banks can offer, but often consider these benefits to be out of their reach.

The situation is a problem for the banks too. For them – and businesses generally – the growing youth population in emerging economies represents a relatively untapped market of millions of potential customers, clients and staff.

When it comes to providing loans, high interest rates are often justified due to the risk of lending, but it is time to rethink this approach.

For example, do banks have to treat young entrepreneurs as really high risk? Can assessment criteria be more flexible for young prospective customers? And could new forms of assessing credit, based on building a financial and savings history rather than on access to collateral, be accepted from those previously excluded?

Credit can support a young person’s growth – or ruin them by depleting their financial health. For instance, research into new digital borrowing schemes saw high levels of late payment, with 31% of borrowers defaulting in Tanzania and 12% in Kenya.

Other research shows that the type of credit matters. Long-term business loans improve financial health, whereas immediate credit to meet day-to-day needs tends to be detrimental.

Making financial health the new goal would mean supporting people towards financial stability – to get to a point where they can withstand financial shocks and feel secure.

Young people will grow up in the unfolding climate crisis, which our research shows is already disrupting lives and livelihoods. They need banks to seriously rethink what they are offering. A wider uptake of formal financial services could provide young people in developing economies with a safer way to build and grow the businesses that will create some of those 600 million new jobs.

Anna Barford works at the University of Cambridge Institute for Sustainability Leadership and her Research Fellowship is funded by a philanthropic donation from Unilever. Anna also consults to Business Fights Poverty, who receive funding from Standard Chartered.

Stephanie Shankland is a PhD Candidate at the University of East Anglia. She is also a freelance researcher and writer for Business Fights Poverty (who receive funds from Standard Chartered) and for the Economist Intelligence Unit annual Country Commerce Reports.

2022-10-15
Previous Post: Is it embarrassing to be an expat? Brits living abroad are distancing themselves from the term after Brexit
Next Post: Daniel Radcliffe pays tribute to ‘incredible’ Harry Potter star Robbie Coltrane