How to understand what’s going on with UK mortgage rates 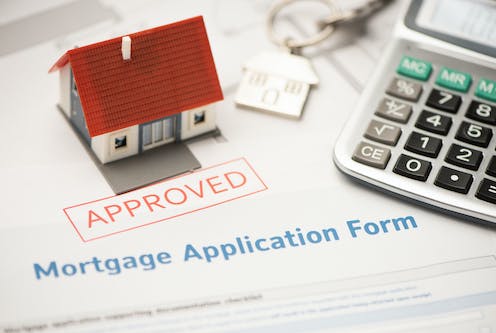 The UK mortgage market has tightened as confidence in the economy has faltered in recent weeks. Lenders withdrew more than 1,600 homeloan products after the (then) chancellor Kwasi Kwarteng’s September mini-budget sent the UK economy into a tailspin.

Rates on the mortgage products that are still available have risen to record levels – average two-year and five-year fixed rates have now passed 6% for the first time since 2008 and 2010 respectively.

The Bank of England has intervened to try to calm the situation. But this help currently has an end date of Friday 14 October, after which it’s unclear what will happen in the financial markets that influence people’s mortgage rates.

This is a crucial issue for a lot of people: 28% of all dwellings are owned with a loan, with mortgage payments eating up about a sixth of household income, on average.

Looking at how the market has developed over time can help to explain how we got here and where we are going – which is basically headfirst into a period of high interest rates, low loan approvals and plateauing house prices.

All financial markets are driven by information, confidence and cash. Investors absorb new information which feeds confidence or drives uncertainty, and then they choose how to invest money. As the economy falters, confidence erodes and the interest rates that banks must pay to access funding in financial markets – which influence mortgage rates for borrowers – become unpredictable.

Banks do not like such uncertainty and they do not like people defaulting on their loans. Rising interest rates and uncertainty increase their risk, reduce the volume of mortgage sales and place downward pressure on their profits.

How banks think about risk

Once you understand this, predicting bank behaviour in the mortgage market becomes a lot easier. Take the period before the global financial crisis of 2008 as an example. In the early 1990s, controls over mortgage lending were relaxed so that, by the early 2000s, mortgage product innovation was a firm trend.

This led to mortgages being offered for 125% of a property’s value, and banks lending people four times their annual salary (or more) to buy a home and allowing self-employed borrowers to “self-certify” their incomes.

The risks were low at this time for two reasons. First, as mortgage criteria became more liberal, it brought more money into the market. This additional money was chasing the same supply of houses, which increased house prices. In this environment, even if people defaulted, banks could easily sell on repossessed houses and so default risks were less of a concern.

Second, banks began to offload their mortgages into the financial markets at this time, passing on the risk of default to investors. This freed up more money for them to lend out as mortgages.

Read more:
How bonds work and why everyone is talking about them right now: a finance expert explains


The Bank of England’s base rate also dropped throughout this period from a high of 7.5% in June 1998 to a low of 3.5% in July 2003. People desired housing, mortgage products were many and varied, and house prices were rising – perfect conditions for a booming housing market. Until, of course, the global financial crisis hit in 2008.

The authorities reacted to the financial crisis by firming up the mortgage rules and going back to basics. This meant increasing the capital – or protection – that banks had to hold against the mortgages they had on their books, and strengthening the rules around mortgage products. In essence: goodbye self-certification and 125% loans, hello lower income multiples and bulked-up bank balance sheets.

Of course, prices have boomed again more recently. This is partly because banks had slowly started to relax, although with less flexibility and more regulation than before the global financial crisis. This reduction in flexibility cut product choice, but low interest rates and low monthly payments have encouraged individuals to take on more debt and banks to grant more mortgages.

Availability of loans fuels house prices so the cycle starts again, although within a more regulated market this time. But the result has been largely the same: average house prices have risen to just shy of £300,000 and the total value of gross mortgage lending in the UK has grown from £148 billion in 2009 to £316 billion by 2021.

But when new information hit the markets – starting with Russia’s invasion of Ukraine earlier this year – everything changed and confidence tanked. The resulting supply-side constraints and spiking fuel prices have stoked inflation. And the very predictable response of the Bank of England has been to increase interest rates.

Why? Because increasing interest rates is supposed to stop people spending and encourage them to save instead, taking the heat out of the economy. However, this rise in interest rates, and therefore monthly mortgage payments, is happening at a time when people’s disposable income is already being drastically reduced by rising fuel prices.

So what of the mortgage markets going forward? The present economic situation, while completely different from that of the 2008 financial crisis, is borne of the same factor: confidence. The political and economic environment – the policies of the Truss administration, Brexit, the war in Ukraine, rising fuel costs and inflation – has shredded investor confidence and increased risk for banks.

In this environment, banks will continue to protect themselves by tightening product ranges while increasing mortgage rates, deposit sizes (or loan-to-values) and the admin fees they charge. Loan approvals are already falling and cheap mortgages have rapidly disappeared.

Demand for homeloans will also keeping falling as would-be borrowers are faced with a reduced product range as well as rising loan costs and monthly payments. Few people make big financial decisions when uncertainty is so high and confidence in the government is so low.

Optimistically, the current situation will cause UK house prices to plateau, but given the continued uncertainty arising from government policy, it’s realistic to expect falls in certain areas as financial market volatility continues.

Robert Webb does not work for, consult, own shares in or receive funding from any company or organization that would benefit from this article, and has disclosed no relevant affiliations beyond their academic appointment.