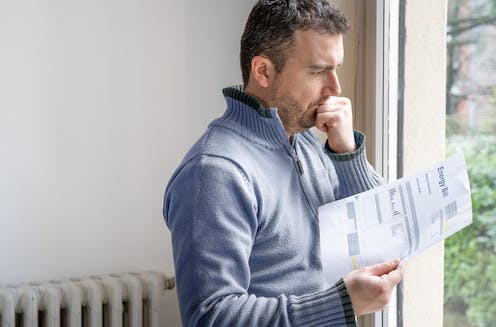 A rapid rise in energy prices for households and businesses this year has led the UK government to outline its energy price guarantee plan, designed to ensure a typical household will pay no more than £2,500 annually for two years from October 1 2022. Businesses will have their energy costs guaranteed for six months from the same date. After this, the government says it will target “vulnerable sectors” such as hospitality with more help, but has not yet provided more details.

Any additional energy costs beyond the government’s guarantee will be covered by the government. And while it has not yet released any financial information about the plan, this could cost more than £100 billion in the first year alone, according to figures based on 2019 consumption from the Institute for Fiscal Studies.

We asked an economist to explain the plan and its likely impact on inflation, as well as who will foot the bill for the guarantee.

How will the new plan address the UK energy crisis?

While this new plan is a notable action and an improvement on Ofgem’s previous £3,549 price cap, it is important to remember that both figures are only examples. The government will freeze the price per unit used and the standing charge (the price you pay for your supplier to maintain wires and send someone out to read your meter, among other things). This means there is no overall cap on what a consumer can be charged – your bill will depend on what you use. So, any potential savings from the £2,500 guarantee – the government says an average user will save at least £1,000 per year – are hypothetical and will depend on individual household and business energy use.

Will the government’s plan cut inflation? If so, by how much?

By cushioning the blow of high gas prices in this way, the government hopes to curb inflation – currently close to a 40-year high at 9.9% – by up to 5%. Energy’s contribution to total inflation was around 1.5% in 2021. Russia’s invasion of Ukraine earlier this year caused gas prices to rise by 95.7% (subsequently pushing electricity prices up by 54% due to the amount of gas-fired power generation used in the UK). This pushed energy’s contribution to annual inflation to 1.9% in April 2022.

If the government had frozen energy costs based on the current average household bill of £1,971, the rate of inflation would have been reduced by 3.9%, according to the Institute for Public Policy Research. But under the new plan, a typical household will now see a 7% increase in energy costs in the first year from current levels, due to a previous £400 rebate, followed by a 27% increase in the second year.

Without firm figures from the government, it’s difficult to pinpoint the exact impact of its plan, particularly since there are other factors at play. Inflation is also affected by shocks such as the supply chain disruption caused by the pandemic. Along with Russia’s invasion of Ukraine and the resulting effect on the supply of certain commodities, such issues have caused the UK to experience demand-pull inflation. This is when supply cannot meet growing demand, causing prices to increase. A change in any of these factors would affect the rate of inflation.

The plan could also indirectly affect inflation. Businesses have been offered an “equivalent guarantee”, according to Truss. As such, we can assume they may also still see an average price rise over the next six months, followed by further uncertainty in the future. Some will push additional energy costs on to consumers through higher prices for goods and services. This will create what is called cost-push inflation, where prices rise as a result of the costs of materials and labour. Those businesses that do not pass on energy cost increases may have to close.

How long will any effects take to feed through to the inflation rate, and why?

The plan could have an impact on people’s finances in the short term by setting an average energy cost. But the effects will take time to feed through into price inflation as households and businesses adjust consumption and investment in response to the policy. The government’s monthly inflation estimates could start to show results around three quarters from now.

Who will pay for the plan?

Liz Truss has stated that the government will borrow to fund its energy crisis plan. At present, 85% of government borrowing comes from selling gilts and bills – investment products that are essentially loans to the seller, in this case the government – to investors like pension funds and insurers.

Repaying these loans will mean raising taxes and essentially asking future generations to fund today’s consumption. Each extra £1 households spend on energy is likely to cost the taxpayer 75p over the next year, according to the Institute for Fiscal Studies.

Instead, some argue that energy firms should be taxed to cover the cost. These companies are expected to generate £170 billion in extra profits over the next two years as a result of rising prices.

Alternatively, adjusting the unit cost cap based on different levels of use, rather than applying a blanket cap based only on average usage, would require high energy users to pay more per unit and could encourage a drop in consumption.

Will this additional borrowing affect inflation?

The policy will certainly increase the supply of money in the UK by pumping an estimated £100 billion into the energy sector through borrowing in its first year. It will be an expansionary fiscal policy, which is good for growth but may create more demand-pull inflation.

At the same time, the Bank of England is likely to continue to try to control inflation by raising interest rates. Higher interest rates mean rising borrowing costs for everyone, including the government.

The government already has a lot of loans already. Its gross debt currently stands at £2,365.4 billion, equal to 99.6% of gross domestic product. With the current inflation rate already raising the cost of borrowing, further unplanned borrowing will add more pressure.

While the energy crisis plan creates a little breathing room for the government, it is a blanket solution. A more targeted approach could have had better results. It will take much more unconventional policy making than this to solve the current cost of living crisis.

Nasir Aminu does not work for, consult, own shares in or receive funding from any company or organisation that would benefit from this article, and has disclosed no relevant affiliations beyond their academic appointment.

2022-09-14
Previous Post: Liverpool shooting and the devastating impact of violence and deprivation on communities
Next Post: Anti-monarchy protesters arrested – an expert on what the law says