Oxford Street candy shops: why food crime is so much more than counterfeit chocolate bars 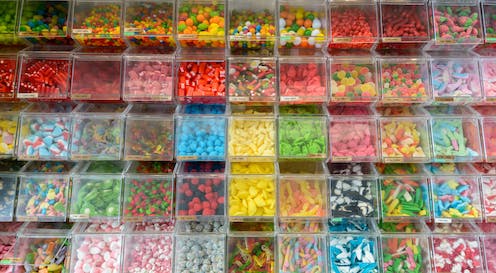 In recent years, Londoners and tourists in the UK capital will have noticed an influx of American sweet shops. US-themed and decorated with fluorescent colours, these shops advertise candy and snacks imported from the US, as well as souvenirs and vapes. The famous shopping destination of Oxford Street currently counts about 30 of these shops, which are also spreading to high streets outside of London.

Despite their apparent successful spread, these kind of shops have attracted suspicion. They have opened quickly in great numbers, but appear too empty to be commercially viable and profitable enough to survive premier location rents.

In June 2022, Westminster City Council announced it was investigating some of the shops for allegedly selling unsafe and counterfeit goods, and engaging in business rates evasion.

According to reports, some shops have allegedly been selling supermarket chocolate bars wrapped in Willy Wonka packaging and with their prices marked up. Counterfeit chocolate bars may sound like a plot point in a family-friendly heist film, but food crime is a serious global problem.

Food crime and fraud can take many forms, affecting food quality, authenticity and safety. Adulteration, the addition of a foreign substance which is not on the product’s label to lower costs or fake a higher quality, is one example. Substitution, replacing an ingredient with a similar substance of inferior quality, is another.

No industry is immune. From sweets, herbs and spices and meat, to olive oil and wine, almost every type of food and beverage has been subject to these kind of practices. Sometimes this is due to intentionally criminal behaviour, other times to non-compliance.

Since ancient Greek and Roman times, the food sector has attracted criminals. It is lucrative, cash-intensive, and often regulated under legislation frameworks that make it hard to prosecute and police. It scarcely suffers from economic turndowns.

As we depend on food for our daily survival, price changes have only limited effect on the demand for food. Food offences often go undetected and are punished with relatively low penalties, depending on the charge. In the UK, food frauds are often prosecuted as administrative breaches of food safety regulations and usually punished with fines.

However, this is not always the case, as proved by the 2012 horse meat scandal, in which beef products were found to be adulterated with the addition of horse meat. The scandal led to multiple investigations and two men were jailed for conspiracy to defraud.

The scandal exposed the need for a special investigative unit in the UK with an intelligence function and powers to prosecute food crime cases. This led to the creation of the Food Standards Agency’s national food crime unit in 2015.

On a global level, the joint Europol-Interpol investigative Operation Opson has targeted fake and substandard food since 2011. It has seized an estimated 12,000 tonnes of fake food and drink, worth US$40 million (£34 million) for being potentially dangerous.

Food crime as a warning: the case of Italy

In addition to being a threat to public health and safety, food crime is a threat to the food industry’s reputation. It can also be an indicator of more “serious” or traditional crimes.

In Italy, a 2012 olive oil fraud was discovered through fiscal checks. Members of an olive oil company mixed oils from different origins and further added oil of low quality, such as deodorised lamp oil, and sold it as 100% Italian extra-virgin olive oil.

Due to the sophistication of the fraud and that it was committed by a group of individuals, for the first time in Italian courts the charge of unlawful association – usually applied to organised crime – was used to prosecute this food fraud. Applying this charge granted law enforcement access to investigative strategies like wiretapping and surveillance.

Food crimes can also signal the presence of organised crime groups infiltrating the food sector. In 2017, in another olive oil case, Italian law enforcement alleged that an ‘Ndrangheta group (a mafia-type organised crime syndicate) was committing fraud by relabelling a low-quality blend of pomace oil as extra-virgin olive oil to US retailers. Investigators arrested 33 people on charges related not just to fraud, but also to drug trafficking, attempted murder and money laundering.

As these cases show, tackling food crime requires cooperation between food regulators, police, health departments and trading standards. Food crime has been around for a long time, but is still often treated as tabloid fodder. The consequences of food crime are serious matters, from making people ill to supporting organised crime.

Alice Rizzuti does not work for, consult, own shares in or receive funding from any company or organisation that would benefit from this article, and has disclosed no relevant affiliations beyond their academic appointment.