Cost of living crisis: why plans to reform the Bank of England won’t help it stop spiralling inflation 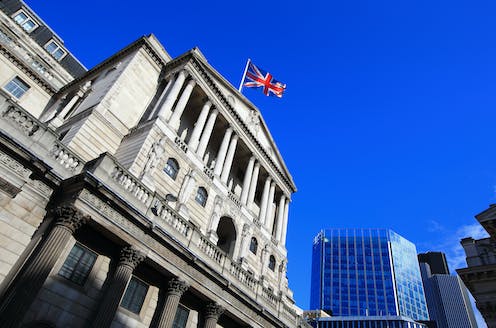 The UK cost of living crisis has been building since early 2021. At 10.1%, the current rate of consumer price inflation is the highest in 40 years and the Bank of England believes it could pass 13% in October.

The pressure of price inflation on UK household budgets has been compounded by the fact that wage growth has not kept up. A 2.8% drop in average real wages between March and May 2022 has left many people with little room in their budgets to afford rising prices. Add to this the highest tax burden in 70 years and it’s no wonder UK households are struggling.

The government created a £37 billion cost of living support deal earlier this year to support households. Since then, however, the country’s dire economic situation has been used as political football. Both candidates for the leadership of the Conservative Party spent the past few months suggesting economic policies designed to appeal to the 170,000 Conservative party members, a group that is predominantly white, British, male, Brexit-leaning, affluent and educated.

In addition to putting forward a low-tax strategy to boost economic growth, the eventual winner and new UK prime minister, Liz Truss, has also suggested reform of the UK’s central bank might be in order. But the kinds of changes she has suggested are unlikely to help the Bank of England tackle inflation and could actually threaten its independence from political control.

Some commentators have dubbed the Bank of England’s governor Andrew Bailey the “plank of England” in response to his claims that he could not have foreseen this economic crisis. In Bailey’s defence, the Bank of England has a toolkit full of fairly blunt instruments when it comes to managing severe inflation.

Its main function is to set monetary policy, which means influencing how much money is available in the economy and how much it costs people and businesses to borrow. Adjusting the Bank of England base rate is the main way to do this, but this involves a balancing act.

Increasing the base rate risks curtailing demand and investment, worsening the expected recession. On the other hand, reducing interest rates could exacerbate the already increasing levels of consumption of goods, potentially causing further inflation.

The recent accusations over the Bank’s inability to keep inflation in line with its 2% target prompted Truss to suggest a review of the Bank’s remit during the Conservative party leadership contest. While Truss has since confirmed her belief in the independence of the bank from government control, she has backed a review into the targets it uses.

Truss has proposed shifting the emphasis away from the Bank’s current 2% target towards maintaining a nominal gross domestic product (GDP) growth target. This would see the bank make monetary policy decisions aimed at hitting a certain level of GDP growth, rather than trying to keep inflation at a specific level. This would see the Bank focus on attaining growth when managing the economy, rather than targeting price stability as it does now.

The blunt instruments currently at the Bank’s disposal have limited ability to affect demand-led growth, however. The UK economy is well on the path for a recession by the end of the year, so such a change would make no difference in the present crisis. As such, it’s unlikely this would really address the current inflation situation.

What such a change would do is increase the connection between the central bank and political representatives, however. The Bank of England has acted independently of political control since 1997. And while a mandate review would not necessarily erode this independence, any interest in guiding the central bank and holding its governor accountable to government could affect its ability to hold long-term policy ambitions free of political influence.

On the other hand, Truss could encourage a little more integration between the monetary policy set by the Bank of England and the fiscal policy set by the government’s spending and tax objectives. Since the bulk of inflation is caused by rising costs faced by firms who produce goods and services, government fiscal policy would be more effective in tackling it than the Bank’s monetary policy anyway.

The new prime minister also wants to shake up the UK’s financial regulators. While little detail has been provided by Truss about this plan, news reports say it could involve a merger of the Prudential Regulatory Authority (PRA) and the Financial Conduct Authority (FCA). This would take the PRA out of the control of the Bank of England, where it was placed after the 2007-2008 global financial crisis.

This kind of awareness was very much absent before the global financial crisis. Separating the PRA from the Bank could risk creating a similar blind spot in future.

A financial services and markets bill put before UK parliament in July 2022 also proposes adding promotion of growth to the remit of the existing regulators. This plan is worrying because it would expose the regulators to the government’s fiscal policy objectives.

Requiring financial regulators to focus on GDP growth targets would challenge the independence of the organisations tasked with maintaining stability and order in the UK financial system.

2022-09-07
Previous Post: Event Manager (Award Ceremonies) at University of the West of England, Bristol
Next Post: Liverpool shooting: what we know about guns in England and Wales