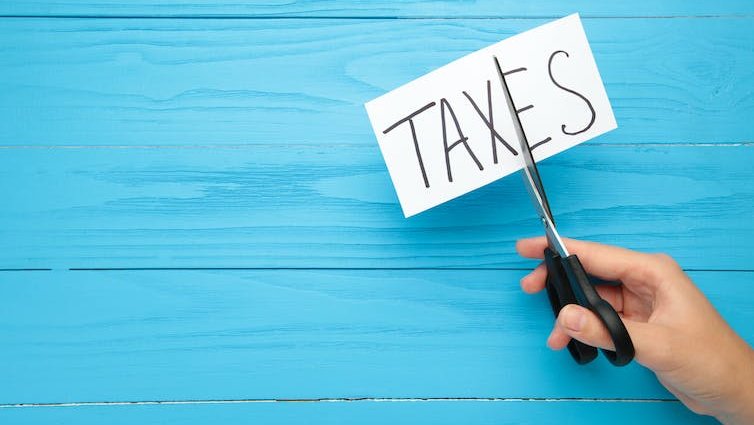 One of the first things the new UK prime minister Liz Truss did upon winning the Conservative party leadership race was to reiterate her desire to turn the UK into a low-tax economy.

She outlined her reasoning about the fairness of this position during a recent BBC interview:

This stance will likely cause controversy among voters, particularly those that aren’t high earners and especially as UK households face a very real squeeze on personal finances this winter.

Truss’s idea is based on the principle that a lower tax economy that primarily benefits higher earners will boost economic growth via increased investment and spending, benefiting the majority of people across all income levels. This well-established theory is known as supply side economics, although it’s often referred to by the arguably more loaded term “trickle down economics”.

This idea is all the more controversial considering the UK is in the middle of a cost of living crisis.

Recent dissatisfaction with the government’s response to the economic situation has of course been partly due to the apparent power vacuum created by outgoing prime minister Boris Johnson’s resignation plus a lengthy leadership election. But regardless, the Conservative party’s polling fortunes have fallen, while, for the first time in more than a decade, the Labour Party now leads in terms of gaining the public’s trust to manage the economy.

Truss hopes that a low-tax economy will help to improve the government’s fortunes, but there are two reasons why this may not prove to be an effective strategy with voters in the current economic climate.

First, the kind of spending and consumption that Truss hopes to trigger with tax cuts wouldn’t happen overnight. Economists generally agree, whether they support supply side economics or not, that there is a time lag between lowering taxes and seeing the effects on the population’s economic position.

This means the increase in economic activity required to uplift the public’s economic mood, if it did happen, would likely take years, not months. As we approach this winter, pressure is mounting for the government to take immediate action on fuel poverty. This is something that will not be fixed by a long-term measure.

Second, cutting certain taxes is not guaranteed to have the desired effect on economic growth. The UK is currently second last out of the G7 countries for income equality, which has increased steadily over the last 40 years. This is due to a relative rise in poverty at the lower end of earnings over the long term, but also a relative increase of wealth at the top end.

But in order for a tax cut to be effective as a supply side economics tool, it needs to incentivise expenditure. With a high level of inequality, there is less incentive for wealthier individuals and corporations to spend as the marginal benefit of the tax cut falls. In other words, if you can already comfortably afford what you need, having more wealth would not necessarily affect your spending.

What a government could do instead is introduce tax cuts specifically aimed at encouraging expenditure, for example, reducing taxes on consumption such as value-added tax (VAT). It could also increase allowances available for capital spending, meaning that corporations can reduce their tax liabilities by investing in equipment and infrastructure. This should also give the benefit of increasing future productivity.

Given the immediate pressure of the cost of living crisis and the perceived inequality of lowering taxes for high incomes, Truss’s tax cut proposals will continue to be divisive. Indeed, this measure was likely designed to galvanise the Conservative Party base at a crucial time, as Truss was campaigning to be leader. The strategy is also likely to be useful to Truss during the upcoming conference season.

Further, framing higher-end tax cuts as being “fair” goes hand-in-hand with conservative ideology of the working world as a meritocracy in which those that reach the top deserve the rewards. Certainly, the Tories recent ballot box success is partly down to the marketing of aspiration and a better future to voters. Arguably this also helped in the Brexit referendum.

So, it’s clear why Truss would want to continue with this strategy. But, of course, she could always change tack with voters at a later date.

In fact, this may be necessary as Truss switches from appealing to Conservative party members to nationwide electioneering. We do not know what a Liz Truss premiership will look like yet, but the strength of her commitment to a low-tax ideology will be tested by public opinion now that she is in office.

Gavin Midgley does not work for, consult, own shares in or receive funding from any company or organisation that would benefit from this article, and has disclosed no relevant affiliations beyond their academic appointment.