If interest rates are raised high enough to kill off inflation, how bad will the consequences be? 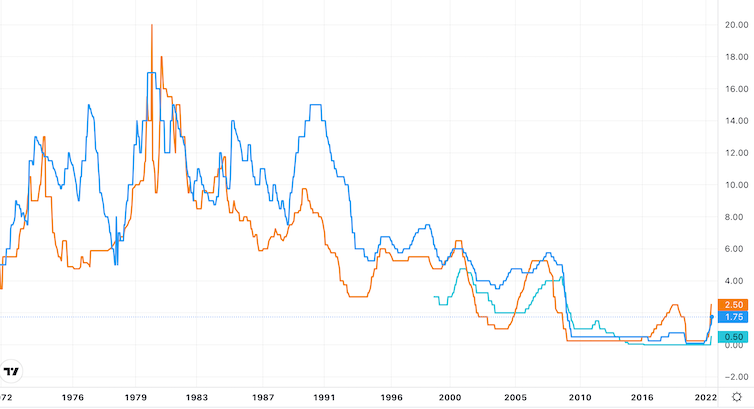 Cineworld has signalled its intention to declare bankruptcy. Like many companies in the UK and elsewhere, the London-based cinema chain took on massive amounts of debt to expand. It is expected to use the Chapter 11 process in the US to restructure its debt and other obligations.

Variations of this story are set to be repeated again and again. With benchmark interest rates rising from the near-zero levels adopted by central banks over a decade ago, a reckoning is coming for all the “zombie” companies that are only able to pay the interest on their debts but never the principal. The same goes for individuals and governments in similar positions.

So far, central banks have only taken small steps to get inflation under control. The Bank of England has raised its benchmark rate from 0.1% to 1.75%, whereas until the financial crisis of 2008 it ranged from 5% to 15%. A return to normal would therefore suggest rates increasing to at least 5%.

That might sound frightening, but it’s nothing compared to what happened when Paul Volcker was chair of the US Federal Reserve between 1979 and 1987. While his predecessors had understood the need to raise rates to fight inflation, they kept caving in to political pressure and cutting rates before the medicine had taken effect.

With inflation rampant by the late 1970s, Volcker simply declared an end to this back and forth and raised rates to over 15% – and then 20% in 1981. This ultimately broke the back of inflation around the world until its current resurgence.

What economists get wrong today

In 2016 the leading macroeconomist Paul Romer wrote a devastating critique called The Trouble with Macroeconomics, pointing to “three decades of intellectual regress”. He said macroeconomists had become comfortable with the idea that increases in economic variables like inflation were caused by “imaginary shocks, instead of actions that people take”.

For example, most economists and central bankers blame today’s double-digit inflation on the “shocks” of the pandemic and Russia’s invasion of Ukraine. But that is like saying that when a driver hits a rock going at 120mph on a country road, the rock caused the accident.

Thanks to zero interest rates and money creation in the form of quantitative easing (QE), the money supply has exploded. Reserves held at the Bank of England, which form the largest part of the core money supply, have risen from around £30 billion in mid-2008 to £946 billion today – doubling in the past two years alone.

This is worrisome by any standards, and my forthcoming book will look at why it was allowed to continue so long. According to the quantity theory of money, popularised by Milton Friedman and Anna Schwarz, this expansion should increase prices in the actual economy by a factor of ten.

Until it became inconvenient, economists and central banks generally believed that you should set benchmark interest rates using a formula known as the Taylor rule. By this calculation, we currently need a rate of 15%.

Central banks hopefully won’t have to go that far to convince the markets they are serious about fighting inflation. After all, everyone has gotten used to historically aberrant low and falling rates over four decades.

So far, however, the markets are pricing 30-year UK government bonds (gilts) at just 2.7%, meaning they still expect very low rates in the long term. And in the US, markets are already pricing in rate reductions. Since higher rates will only work once the markets believe they are here to stay, the worry is that maybe even 15% won’t be enough.

To get a sense of what much higher rates would mean, consider the UK housing market. If the Bank of England obeyed the Taylor rule, your tracker mortgage would rise from the low of roughly 1% to above 15%.

Two million homeowners have variable rate mortgages, so would be affected immediately. Besides that, most fixed-rate mortgages in the UK are two or five-year fixes (unlike in the US, where most people get 30-year fixed mortgages). When these deals end, a further 7 million people would be exposed too.

The average mortgage balance today in the UK is about £150,000 (the good news is that fewer than 1% are currently in arrears). For someone with 25 years to repay on that size of mortgage, each percentage point increase on the rate will push up the annual repayment by an average of nearly £1,300 (or £1,500 on interest-only mortgages). So an increase in rates from 2% to 7% would cost home owners well in excess of the forthcoming utilities price hike.

How higher rates will affect repayments

Yet without downplaying the potential effect of forced repossessions and sales in our property-owning economy, the more important impact on the housing market from higher rates would be on new purchases. If rates merely double, house prices would have to roughly halve to maintain the same level of (un)affordability. For example, if someone buys a property for £200,000 with a 2% mortgage rate and no deposit, they pay about £4,000 annual interest. If interest rates double to 4%, they pay £8,000 interest. For repayments to remain the same, the house price would have to fall to £100,000.

Read more:
Corporate debt is in serious trouble – here’s what it means if the market collapses


Of course, the government would want to step in with house-price support measures in the face of higher rates. But that implies more borrowing when it is already paying nearly £20 billion in monthly debt interest.

Then there is the Bank of England. The Bank pays the benchmark rate on all the reserves it holds from UK banks and other financial institutions. Its balance sheet also massively expanded via QE, which involved buying lots of gilts at fixed interest rates from UK financial institutions by increasing their reserves at the Bank. For years, the interest from the gilts more than covered the interest payments on the reserves, but that situation is now reversing as benchmark rates rise, thereby adding to the government deficit.

The government will need to balance its books to cover these costs. It shouldn’t do this by restricting public sector wages or infrastructure investment. Tax rates on corporations and wealthy people will need to rise.

After 40 years of partying, interest rates now have to go up sharply – the 7% rate associated with Professor Patrick Minford, Liz Truss’s economist advisor, would be a good starting point. Unfortunately the hangover will be massive.

But bite the bullet now and it’s possible that, like the Volcker years, the scene will be set for a prolonged period of technology-driven expansion and prosperity on the back of a low-inflation environment. There will also be other advantages, such as making homes more affordable for younger people and higher-interest savings accounts. These will be the consolations in a difficult period ahead.

Jefferson Frank does not work for, consult, own shares in or receive funding from any company or organisation that would benefit from this article, and has disclosed no relevant affiliations beyond their academic appointment.