China property crisis: why the housing market is collapsing – and the risks to the wider economy 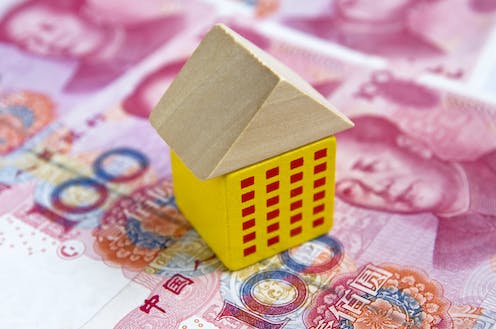 China has been trimming interest rates recently – in contrast to other major economies – as it tries to stem the economic effects of its zero-COVID policy and address a growing property crisis. The country’s traditionally strong housing market has been affected by a funding crisis that has seen development paused and led to buyers refusing to pay their mortgages.

The recent spate of mortgage strikes by homebuyers across China has exposed the risk that has accumulated in the market as it has developed over the past two decades. The mortgage strikes started earlier this year among a group of people that bought homes in an Evergrande development in Jingdezhen city, Jiangxi province, but protests have since spread to buyers of other developments throughout China.

To date, more than 300 groups of homeowners are believed to be refusing to pay between US$150 billion (£127 billion) and US$370 billion in homeloans, according to informal surveys published online.

These protesters all have one thing in common: they have been paying mortgages, often at a rate of 5%-6%, on homes they have never lived in. These properties were sold before they were built under what’s called the presale system, which is a common way to buy property in China.

The trigger for the buyers’ strikes is a widespread belief among these protesters that the funds homeowners have paid in advance to the builders of these property developments have been misused.

Under the presale system, buyers deposit money in an account before the property is built. Chinese banks and local authorities are obligated to monitor developers’ use of these funds. Developers are not supposed to have access to all of the money until they have hit certain pre-agreed milestones during the building process.

But buyers have recently complained that many banks –- whether or not local authorities are aware is unclear –- have been providing loans to developers before the required stage of work has been reached.

Buyers have also complained that, although these funds should have been kept in designated escrow accounts that regulators can monitor, sometimes they are not, enabling developers to evade regulations. Overall, these buyers believe loose regulation of funds has provided some developers with both the temptation and ability to keep investing in new projects, by borrowing more before current projects are completed.

Indeed, a commonly observed pattern in China’s property development industry is for developers to purchase lands, pledge them to banks to get loans, start projects, begin the presale process with buyers and then use these funds to purchase lands for other projects.

In such situations, only a portion of a buyer’s funds might go towards the construction of their own property. As a result, a recent liquidity crisis in the sector has stalled many projects because the developers involved can’t afford to continue building.

The rise and fall of the Chinese property market

Today’s situation follows a boom in the Chinese property market. The housing market had been enjoying a long rise since the early 2000s, which reached a peak in 2018 before a gradual cooling that ended in a sharp decline in sales in early 2022.

The chart below (figure 1) shows the change in China’s Real Estate Climate index, which measures aggregate business activity in land sales and real estate. New house sales have slumped substantially this year, with values dropping by 22% compared to the same time last year.

The weak market has substantially reduced the funding available to developers, as figure 2 below shows. This is the root cause of the current situation in which developers have paused building, causing homeowners to strike by refusing to pay their mortgages.

Tightening credit conditions also play an important role. Among other things, a key policy change is the government’s “three red lines” regulation, introduced in August 2020. It categorises developers according to how much debt they hold, which then determines how much more they can borrow annually.

More than 60% of developers have hit at least one of the debt thresholds set by regulators in 2021, as shown in figure 3 below. Around 10% – crisis-hit Evergrande included – have breached all three. When this happens, developers are not allowed to raise new borrowing for that year. The resulting credit crunch has pushed many developers into a stressed position, with some even defaulting.

The potential for a wave of developer bankruptcies is the biggest risk to China’s housing market at the moment and could result in a large number of unfinished properties.

This is not alarmism: Chinese developers generally borrow a lot of money to fund ongoing construction. While the industry average debt-to-asset ratio is around 65%, some of the leading companies are even more indebted (see figure 4 below).

The industry has also seen a gradual fall in developers’ current ratios (their ability to repay short-term debts, see figure 5 below), which indicates lower overall liquidity and leaves the industry vulnerable to financial shocks.

The risk from the real estate sector could also spill into the wider economy via banks and local governments, which are the two biggest entities supporting China’s growth.

Banks lend both to buyers and developers and so could face a surge in bad debts if the housing market collapsed. The good news is that these loans are a relatively small proportion of the banks’ total lending. According to my own calculations based on government figures, mortgage loans comprised just under 20% of banks’ total lending by the end of 2021, while, as declared by the major banks, only about 0.01% of those loans are affected by the current strikes.

On the other hand, real estate developments comprise only 6.2% of Chinese banks’ total loan books. Even so, major defaults could lead banks to tighten lending conditions, causing market liquidity to fall even further.

Local governments are a different story. They often rely heavily on selling land for income and so failing to secure a stable flow of proceeds from land sales could affect their investment and urbanisation projects. This would be a further drag on China’s recovery from the pandemic at a time when it is already struggling due to the government’s ongoing zero-COVID policy.

When it comes to global implications, it’s worth remembering China’s “closed” capital account policy restricts movement of money in and out of the country. This largely isolates China’s financial market from the international market.

So, unlike during the 2007-8 global financial crisis, these defaults would be unlikely to directly affect the world economy, although countries that trade with China may see a modest fall in demand from their Chinese consumers.

Zhirong Ou does not work for, consult, own shares in or receive funding from any company or organisation that would benefit from this article, and has disclosed no relevant affiliations beyond their academic appointment.

2022-08-24
Previous Post: The history of secret education for girls in Afghanistan – and its use as a political symbol
Next Post: Behind the scenes at the United Ukrainian Ballet: ‘This is the beginning of a renaissance’