When do strikes work? History shows the conditions need to be right 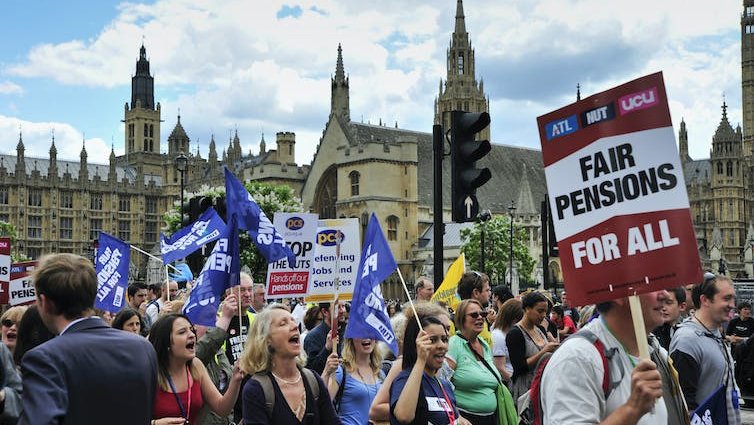 There has been a significant decline in union-led strike action in the 21st-century UK. But with average public sector pay increasing by 1.5% between March and May 2022 (versus 7.2% in the private sector) and households facing a cost of living crisis, industrial disputes are on the rise again in the UK.

Strike action has already picked up in recent months, particularly among rail workers. Now unions in other sectors, including those for airlines, port workers and exam markers, are asking members to vote on whether or not to follow suit. Unions are legally required to hold a ballot for members to approve industrial action.

Workers that vote in favour could look to history for insight into how to make a strike work. Some of the more successful campaigns waged by UK unions happened in the 1970s. Trade union membership had reached a peak of 13.2 million by 1979, after years of sustained growth. Crucially, these unions also faced fragile governments and strong public support for striking workers.

On the other hand, many of the most famous national strikes in Britain are somewhat notorious for being unsuccessful. And even the victories have often been followed by greater restrictions on unions.

The successful strikes of the 1970s

In 1970, the Conservative prime minister Edward Heath had secured a 30-seat parliamentary majority but his government was beset by unemployment and inflation issues. In this environment, British coal miners struck for the first time in nearly 50 years in 1972. Polling showed 55% of the public were sympathetic to the miners’ pay demands and the strike ended following the publication of a government inquiry which recommended a 27% pay increase.

But action resumed in 1974 when wages failed to reach this level. This resulted in a three-day week in Britain, with electricity to commercial premises rationed as strike activity affected fuel supply. The Conservative government called a general election and Labour emerged as the largest party in a hung parliament in February 1974. The miners secured a 35% pay increase under the new government.

By the end of the 1970s, the unions’ significant membership boosted their bargaining power, particularly against the fragile government of the day. (The narrow parliamentary majority Labour had secured in October 1974 had disappeared by 1976.)

But to combat economic difficulties – much like today, Britain was experiencing high levels of inflation – the Labour government introduced a social contract to minimise pay rises. The trade union movement supported this deal until 1978 when then-prime minister James Callaghan attempted to introduce a further round of restraint with a 5% pay cap.

Following the August 1978 Ford factory strikes, which secured a 16.5% pay rise for its workers, public sector workers began strike action in January 1979 across a variety of industries in what became known as the winter of discontent. In total, 4.6 million workers participated in the 1978-79 strikes.

Callaghan’s attempts to hold the line on the pay cap ultimately failed but might have worked with a more stable parliamentary majority, particularly since 84% of people believed trade unions were too powerful at this time.

The results of the winter of discontent were mixed. Many sectors received pay rises, but the action encouraged a public backlash against trade unions. In March 1979, Callaghan’s government lost a no-confidence measure by one vote, paving the way for the May 1979 general election. Margaret Thatcher’s subsequent victory saw significant restrictions placed on union activity, including limitations on picketing, a ban on sympathy strikes, the end of the closed shop and a requirement for secret ballots for all unions.

For example, Britain’s first – and so far only – general strike nearly 100 years ago saw up to 1.75 million workers from various industries strike against pay cuts for miners. The government at the time enjoyed the support of the public, had a parliamentary majority of 209 and was prepared with alternative transport networks and volunteers to maintain services.

The Trades Union Congress called off the strike after 9 days with no major concessions granted to the miners. Indeed, the main impact of the strike was a clampdown on union activity by the government. The 1927 Trades Dispute Act banned general strikes, sympathy strikes and large-scale picketing.

Another well-known miners’ strike in 1984 played out under similarly difficult conditions for unions. After refusing a 5.2% pay rise in 1983 and fearing pit closures, the National Union of Mineworkers called an unballoted strike in March 1984.

At its height, 142,000 miners walked out, but all returned to work after a year without agreement. At this time, Margaret Thatcher’s conservative government had been re-elected by a landslide in 1983, while opinion polls during 1984 indicated public sympathy lay with the employers.

The most recent large-scale action taken by trade unions happened during a period of similar political stability. Public sector strikes held in 2011 in response to pension reforms involved up to 2 million workers, according to unions, and resulted in 60% of schools closing and 6,000 cancelled hospital operations. But it did not lead to large scale changes to public sector pensions and did little to halt public sector austerity cuts.

David Cameron’s Conservative Party had formed a stable coalition government with the Liberal Democrats a year before. The public also disapproved of industrial action by teachers and civil servants, even though they opposed the government changes to public sector pensions that had led to the strike.

The Conservatives clamped down on such strike activity following their victory at the 2015 General Election. The 2016 Trade Union Act introduced a 50% turnout requirement for strike action, alongside a 40% support threshold among all workers in key public service industries.

For ongoing strikes today to have any prospect of success, unions must carefully balance industrial action with negotiation to maintain public support. And the government must seriously engage with public sector pay claims, particularly during the cost of living crisis, to avoid a further slide in political opinion polls.

Christopher Massey is a Principal Lecturer at Teesside University and a Labour Party Councillor for Redcar and Cleveland Borough Council.

2022-08-05
Previous Post: Bladed ‘Ninja’ missile used to kill al-Qaida leader is part of a scary new generation of unregulated weapons
Next Post: Making public sexual harassment a crime could help increase reports – but can women trust police to follow through?