UK house prices: history says the market is in for a long slowdown not a crash 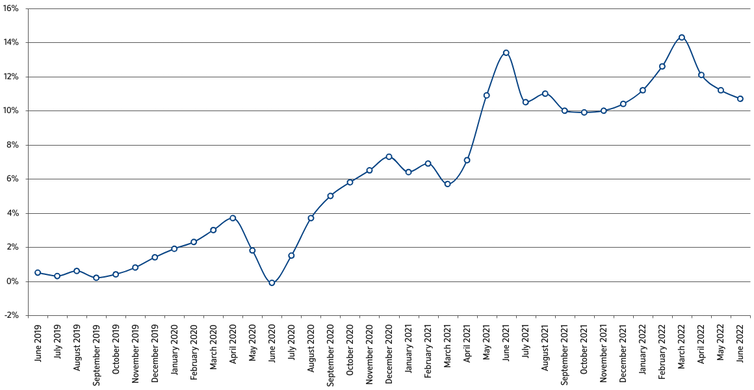 It’s going to be easier to get on the property ladder following a recent decision by the Bank of England to relax some of the criteria for getting a mortgage. Combined with expectations of a slowdown in the property market, this news will be something of a relief to those who have been unable to buy a home due to booming prices in recent years.

Affordability has been affected by a recent boom in house prices as demand for new properties rose after pandemic lockdown restrictions were lifted. The number of houses changing hands during this time has kept prices elevated, with transactions currently at the highest level since just before the global financial crisis in 2008.

But while the latest Nationwide figures for UK house price growth are still in double digits, the rise has slowed in recent months. A crash, which is generally understood as a price drop of 20% or more, is unlikely. But a correction (a fall of between 10% and 20%) could happen if the economy takes a substantial dip. This prospect looks increasingly likely as inflation looks set to pass 10% in coming months, which would cause consumers and businesses to rein in spending.

While buyers may be pleased to hear forecasts of falling house prices, this is not such good news for sellers. But both sides of the market will be interested in the likely strength of any housing market correction.

The busts of the late 1980s and 2000s followed similar price booms to the one we have just experienced. These periods show that, if a widely expected recession follows the current slowdown in house prices, the market could fall more sharply and then experience a longer-term chilling effect. In other words, homeowners and prospective buyers can expect a correction, rather than a crash, followed by a slow recovery.

The UK housing market downturn that started in the 1980s saw prices fall in absolute terms for the first (recorded) time, and this continued until 1994. It was not until 1997 that house prices began to rise again by more than 5% per annum. Annual house price inflation then persisted above this level for the next 10 years until its peak in the final part of 2007.

During the recession that followed the 2008 global financial crisis, house prices fell consistently across all regions until the spring of 2009. The national average drop was 21% during this time, with regional variations ranging from 20% to 26% (not including Northern Ireland). The highest percentage declines were in the southern regions of England.

The anatomies of these two busts were very different, even though both saw a fall in nominal (non-inflation adjusted) prices linked to recession. The 1990s downturn was driven by forced property sales due to extreme interest rates and high unemployment – households that were in negative equity were unable to make their mortgage payments.

In contrast, the downturn of the late 2000s saw relatively high unemployment but low interest rates, which still generated a fall in house prices. During this time, the market was particularly negatively affected by banks’ widespread withdrawal of mortgage finance in the wake of the financial crisis due to their financial collapse, leading in some cases to nationalisation. Their priority was rebuilding their capital base rather than lending. Reductions in loan to value ratios (the amount a bank is willing to lend as a percentage of the property price) from 95% to 75% significantly reduced buyers’ purchasing power.

In both of these periods, recessions caused a house price collapse, but not all recessions actually lead to a price drop. The recessions of the mid-1970s and early 1980s only caused real house prices to fall – that is, they declined in line with inflation, rather than seeing an actual fall in value. One reason may be that these recessions occurred prior to the rise in lower-income owner occupation through schemes like right-to-buy that were launched in the 1980s. Such households are more susceptible to financial difficulties during recessions.

The good news for homeowners then is that house prices do not typically fall unless there is a recession, and even then it is only a possibility. On the other hand, the current rising interest rate environment in the UK could have significant consequences for monthly household budgets. Together with mounting living costs, this would increase mortgage costs, perhaps even making them unaffordable for some homeowners. It might be possible to address this to some extent by remortgaging, however.

Past experience of UK house price corrections shows that the recovery from a downturn can be slow, taking many years. During this time, opportunities to move up the property ladder – to upgrade in line with growing family needs, for example – will be limited. Modest or no increases in house prices also mean that households do not accumulate the deposit needed for a new mortgage for a more expensive house.

So, the prospect of a global recession in 2023 means there is the potential for falling house prices, and even a correction could have a prolonged negative effect on the housing market. In other words, the UK housing market could be facing a long-term period of stagnation.

Colin Jones does not work for, consult, own shares in or receive funding from any company or organisation that would benefit from this article, and has disclosed no relevant affiliations beyond their academic appointment.

2022-08-03
Previous Post: Ukraine war: Nato and the EU can turn Kosovo border crisis into an opportunity to put more pressure on Russia
Next Post: COVID: how careful do I still need to be around older and vulnerable family members?