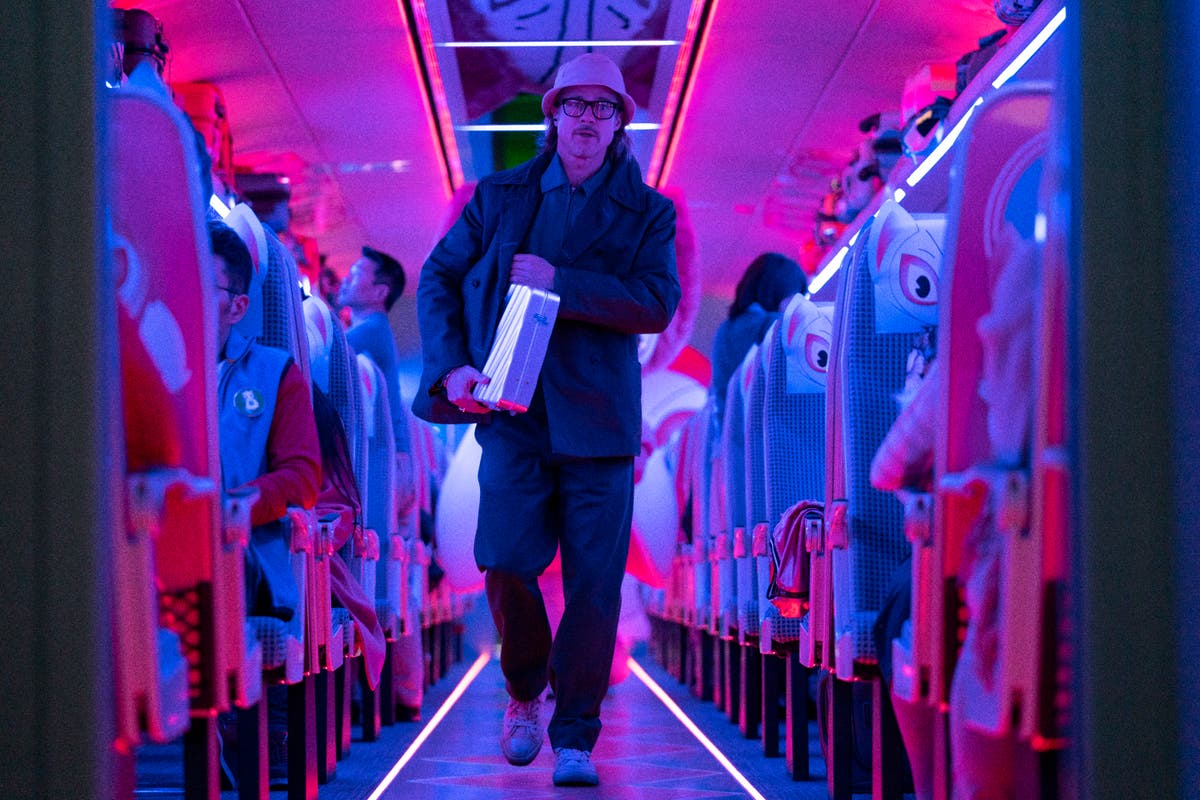 t sounds like fun, right? Five assassins and a stray snake on a train hurtling from Tokyo to Kyoto, all bent on killing somebody once the trolley has passed through their carriage. There’s a east London mobster who claims to have learned everything about life from Thomas the Tank Engine; Brad Pitt as a washed-up gun for hire in a dumb sun-hat and shades, muttering therapy mantras; even a textbook samurai, who rises from somewhere near the luggage rack wielding a sword. Bullet Train, David Leitch’s adaptation of Kotoro Isaka’s 2010 best-seller, ticks a lot of boxes.

And it is fun, up to a point. From the moment we see the neon lights of Tokyo flip up like a postcard, accompanied by a blast of the Bee Gees’ Stayin’ Alive (in Japanese), we recognise that we’re in comic-book territory. Like many action thrillers of similar bent, Bullet Train has a plot that is simultaneously simple and so convoluted that you can find yourself, about an hour into your popcorn, wondering when that corpse now blocking the window was killed. And why? By whom? And what about the briefcase full of money that started this whole caper? Where did it go? And know that the answers to these questions really don’t matter.

Really, the fights are what it’s all about. There are some brilliantly contrived battles in the train’s narrow spaces, including one involving a pudgy life-size anime pussycat. The most obvious cultural cliché in the film – when The Elder comes out with his samurai sword – is also the best, thanks to the elegance and gravitas of the great Japanese actor Hiroyuki Sanada. Naturally, all Brad Pitt needs to defend himself is the aforementioned briefcase and an overpriced bottle of water: he may be 58, ladies, but he’s still got it.

Pitt’s criminal operative, called Ladybug by his handler is given the task of stealing the briefcase, which contains US$10 million. Two London bad boys, Lemon and Tangerine (Brian Tyree Henry and Aaron Taylor-Johnson) were supposed to deliver it in Kyoto to the nastiest gangster in the whole world, White Death (Michael Shannon), but manage to lose it.

Pink popsicle schoolgirl Prince (Joey King), the nastiest of all the nasties on this train – she even targets toddlers – has tampered with it, but isn’t interested in the contents: she just wants to kill the owner. Wolf (Benito A Martinez Ocasio), for lupine reasons of his own, wants to kill Ladybug. The Hornet (Zazie Beetz) wants to kill – I don’t know, somebody. The snake, sadly underused, just lurks around being poisonous. So far, so comic-book.

The missing bit of that equation is anything comic. David Leitch directed Deadpool 2, but Bullet Train has none of that franchise’s snap, just a few isolated snickers. Despite frantic cross-cutting, maniacal camerawork and a spectacular derailment, even the action loses force: it is just too insistent.

All that biffing bodies about; all those bleeding eyes, all those slow-mo flashbacks of massacres on four continents: frankly, you can only gasp so often. Bullet Train is only a bit over two hours, but you do start to wonder if it will ever reach the terminus.

2022-08-03
Previous Post: I’m A Celebrity is officially returning to Australia for 2022 series
Next Post: Ukraine war: Nato and the EU can turn Kosovo border crisis into an opportunity to put more pressure on Russia