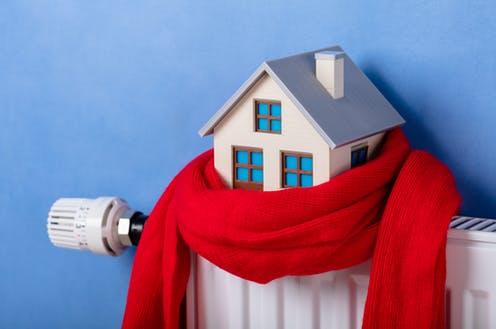 The future does not look bright for energy bills, with fuel poverty set to affect over 6 million UK households in 2022. And industry consensus appears to be that prices currently squeezing homes and businesses will not come down any time soon.

What to do about this is not straightforward. Cold homes are responsible for over 20% of excess winter deaths in the UK, and the cause of serious physical and mental illness.

One energy company was roundly criticised for its response to the crisis when it advised customers cuddling a pet and doing star jumps. This was a clumsy response to a serious problem, but changing our behaviour can often help reduce our bills.

One aspect of this is a better understanding of energy usage.

During the course of our research into improving energy efficiency, we noticed some common gaps in people’s general understanding of the best way to use the electricity and gas coming into their homes. In other words, what we call “energy literacy” was fairly low.

There are many for example, who think that turning the thermostat higher makes the house warm up quicker. In fact, the speed doesn’t change – it just means the heating stays on longer to reach a higher temperature, using more energy.

It is also common for people not to fully comprehend heating control systems, some of which can be quite complex, featuring timers, zones and boosters. This can lead to over or under-heating parts of a house, resulting in wasted energy and varying levels of comfort.

Energy “illiteracy” can also mean a lack of understanding about the varying costs of keeping homes warm. Often people assume (usually wrongly) that their gas central heating is the most expensive option, so resort to what they believe are cheaper alternatives.

This might mean using portable electric room heaters instead of radiators, which can end up costing more. For despite the recent spike in the cost of gas, electricity is still currently around four times as expensive as gas.

We have even seen instances of people avoiding using the central heating and opting instead to use the gas hob in their kitchens as a heat source (which is highly dangerous as well as extremely inefficient).

Understanding fuel bills themselves is a part of energy literacy too. Where a single “dual fuel” payment is made, it may not be clear how much a customer is spending on gas versus electricity. Often estimates are used instead of actual readings, and the smart meter roll out has been anything but smooth.

Also, energy bills are usually spread out evenly over the year, so the amount householders pay per month isn’t directly linked to how much gas they used that month. This adds another layer of separation between householders, their energy use and the bills they pay.

Our research also found some customers’ decisions may be costing them money. We analysed the energy consumption of customers on off-peak tariffs (often called Economy 7) and found that they were often unable to take advantage of the cheaper rates and instead ended up using most energy during peak times. This meant they ended up paying more than if they had switched to a standard single tariff rate.

To a certain extent then, there are some steps people can take to deal with rising prices from improving their understanding of things like bills, tariffs and thermostats.

Another approach is to improve home insulation, although this can be costly. Installing loft insulation in an average three bed semi-detached home for example, could cost around £1,500, while solid wall insulation can be over £14,000.

But with annual savings of only around £40 for loft insulation or perhaps a few hundred pounds for the most solid wall retrofits, earning the money back through savings takes decades. This can make it an unattractive option, especially as it is uncertain whether or not those improvements add resale value to homes.

The popular alternative to gas central heating, electric heat pumps, are also expensive (and currently being supported by a £450 million government subsidy).

For although heat pumps can be around three times more effective at delivering heat for every unit of energy they use, this is offset by electricity being around four times the cost of gas.

Switching to heat pumps could therefore actually increase household heating bills, while installing them can cost more than four times the price of fitting a gas boiler.

The future of heating then, is expensive. To reach the UK’s 2050 zero carbon targets, it has been suggested that a long-term national retrofit strategy (where existing homes are made more energy efficient), supported by a tenfold increase in government spending on home improvements, will be needed.

In the meantime, a small but achievable first step would be taken if energy literacy was widely improved. This would empower people to make better decisions about how they heat their homes – and how they can deal with the energy price hikes heading their way in the coming months and years. For any new government action or investment will take many years to have an effect – and be too late for many householders struggling with rising fuel bills today.

David Glew does not work for, consult, own shares in or receive funding from any company or organisation that would benefit from this article, and has disclosed no relevant affiliations beyond their academic appointment.

2022-03-03
Previous Post: Ukraine Recap: the origins of Putin’s war – and why it’s not gone to plan
Next Post: We’re recycling potato skins to make prebiotics: here’s why that’s good for your gut – and the planet