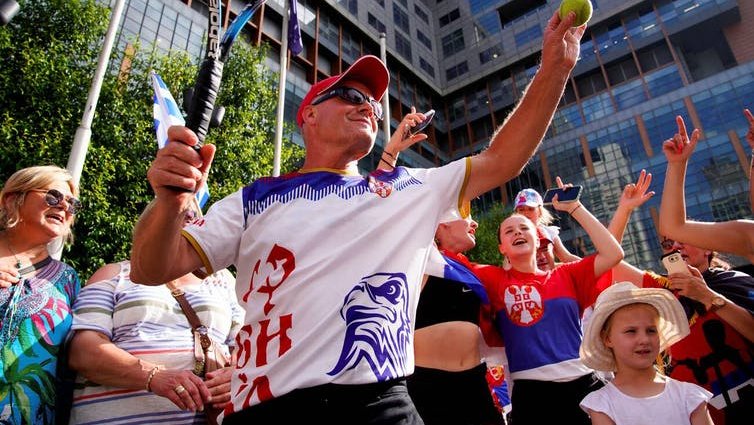 Tennis star Novak Djokovic looks to be out of the Australian Open after the country’s immigration minister, Alex Hawke, cancelled his visa “on the basis that it was in the public interest to do so”. This follows an earlier quashing of the original decision by Border Force officials to cancel the Serbian player’s visa when he arrived in Australia because he didn’t have a COVID vaccination. Djokovic’s lawyers have now headed to court to seek an injunction against his deportation.

Djokovic was seeking a tenth title at the event, as well as the world record for men’s Grand Slam wins. At the age of 34, it raises questions about whether he will now be able to fulfil his potential on the court before he retires.

At a time when multiple countries have been introducing restrictions on unvaccinated people, it raises questions about whether other sports stars will run into similar issues. We asked sports management expert Keith Parry about what the visa struggle might mean for sports stars and teams around the world.

Will Djokovic’s visa saga have implications for other sports in Australia?

Yes it will. Now they’ve set the precedent, I think we could see other players fall foul of this system when entering Australia. Clearly the federal government do not want unvaccinated players coming into Australia so it will deter some (unless they agree to isolate for two weeks).

In the US the public know if players are unvaccinated because of regulations there. For example the National Basketball Association has released a list of unvaccinated players. There’s no requirement to name players in the UK, but there’s been coverage about Premier League footballers not being vaccinated.

What are other teams likely to do to avoid trouble?

Liverpool FC manager Jürgen Klopp has said that he won’t sign an unvaccinated player. So there’s an implication for players’ livelihoods. Players who are unvaccinated may have limited choice not just in terms of where they can go and travel, but also in terms of the clubs that are prepared to sign them. So we’re entering unprecedented territory now. Other managers may follow Klopp’s lead.

Some managers will see the Djokovic decision as further evidence of the challenge that unvaccinated players pose to clubs. Another challenge for sport managers may be sponsors and partners, who may exert influence on athletes or teams if they have strong views on vaccinations. We see many sponsors end relationships with teams or players if they feel it is bad for their image.

Teams and organisations will also now think carefully about where they play or host matches. Teams will pay even closer attention to the regulations in countries and ensure that they have sufficient time to meet the requirements for isolation or bubbles. Countries that have stricter rules may look less appealing in the future.

Will sports stars worry about their statements on vaccines making a difference to them playing?

Players are very affluent. They’re young and feel indestructible. But they may think twice now about what they say on social media about vaccines. It will be interesting to see how athletes who refuse to be vaccinated are viewed. Will it tarnish Djokovic’s image or, as is often the case, will he be forgiven and the episode written out of his story?

Which countries with upcoming tournaments could be an issue in future?

In Europe, Italy and Germany have vaccine mandates and so tournaments there, or European club competition matches in these countries, may present challenges. France just relaxed its travel rules but unvaccinated players are still required to isolate for ten days. This may be an issue for the Six Nations rugby tournament this spring.

Different state rules around the US may be a challenge for athletes. Kyrie Irving of the Brooklyn Nets, for instance, cannot play in New York because of its regulations, but he can play in the team’s away matches in most other states.

Is this a sign that sports stars can’t always get around the rules?

In the past, organisations like international football association FIFA and the International Olympic Committee have operated outside of borders and outside of the rules. Often no one holds them accountable. Clearly these celebrities do expect to have preferential treatment. So this visa wrangle may be a bit of a shock.

Ordinary people have to go through immigration, fill in forms ourselves and follow the rules. But when you’re idolised by millions around the world, it’s very difficult to think that the rules apply to you. Sports heroes have crossed over into the realm of celebrity but there’s a need for athletes to uphold society’s values.

Keith Parry does not work for, consult, own shares in or receive funding from any company or organisation that would benefit from this article, and has disclosed no relevant affiliations beyond their academic appointment.

2022-01-14
Previous Post: The Matrix: how conspiracy theorists hijacked the ‘red pill’ philosophy
Next Post: Rogue planets: how wandering bodies in interstellar space ended up on their own