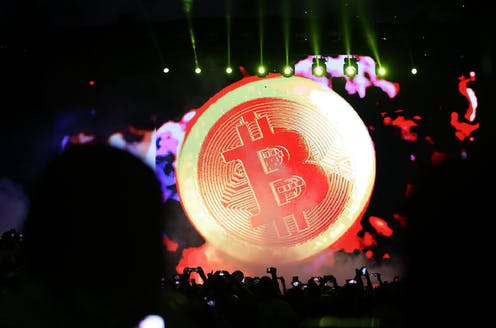 We dive into the world of crypto and digital currencies and take a close look at two countries approaching them in very different ways in this episode of The Conversation Weekly. And if the latest Matrix film has left you wondering whether we are really living in a simulation, we talk to a philosopher on the long history of that idea.

Nigeria is Africa’s largest economy and its most populous country. El Salvador is a small republic in central America. But despite their many differences, they have two economic problems in common. First, a large proportion of their populations don’t have access to bank accounts. Second, their economies rely heavily on remittances, money sent back by people living abroad. But the money transfer companies that facilitate these cash flows can be slow and costly.

In 2021, both countries turned to the fast-moving world of digital currencies in an effort to tackle these, and other problems. But they’ve taken very different routes.

Nigeria banned bank trading of cryptocurrencies in February and then launched its own central bank digital currency, the eNaira, in October. Nigeria was only the second country in the world to launch a central bank digital currency, after The Bahamas. More may soon follow suit, including China, which in January expanded the pilot of its digital yuan to more areas, including the major cities Shanghai and Beijing.

Nigeria’s decision to launch its own digital currency came as a surprise to many, says Iwa Salami, reader and associate professor in law at the University of East London in the UK and an expert on digital currencies. Initially, eNaira wallets are only available for people with bank accounts, but the plan is to extend access to anyone with a phone number in the future.

One of the questions, Salami says, is whether Nigeria will be able to “fully achieve financial inclusion in the way that it’s been promoted.” There are a number of risks involved, she says, including to financial stability if those with eNaira wallets start using them as a deposit account. “Therefore, rather than using commercial banks, people actually use eNaira wallets to store their savings, which then means that the relevance of banks becomes redundant,” she says.

Read more:
Nigeria’s digital currency: what the eNaira is for and why it’s not perfect


While Nigeria opted to create its own central bank digital currency, El Salvador became the first country in the world to adopt a cryptocurrency as legal tender. The US dollar has been El Salvador’s currency since 2001, when it abandoned its currency, the colón. But in September 2021, El Salvador added bitcoin to its list of official currencies.

Erica Pimentel, an assistant professor at the Smith school of business at Queen’s University in Ontario, Canada, says there were geopolitical reasons for the decision, as well as an aim to increase financial inclusion and speed up remittances. “We see El Salvador standing up and saying we don’t want the dollar anymore, we want to be masters of our own domain,” she says.

In November, the government of El Salvador’s President Nayib Bukele announced plans for a Bitcoin City. Pimentel says it’s “a city built from scratch, whose economy is centred on bitcoin mining and is powered by a volcano.” She talks us through the risks involved with El Salvador’s embrace of bitcoin, and says other countries will be closely watching what happens.

From virtual currency, we turn to virtual brains, and the question of whether or not we’re living in a simulation, a little like that in The Matrix. Benjamin Curtis, senior lecturer in philosophy and ethics at Nottingham Trent University in the UK, explains the long history of this idea. He tracks versions of this question posed by ancient Greek philosophers, to René Descartes in the 17th century and how it evolved with the modern computing era. Curtis says when The Matrix film first came out in 1999 it “certainly introduced these ideas to a much wider audience”. (At 30m20)

And finally, Rob Reddick, COVID-19 editor at The Conversation in the UK, picks out some recent coverage of the wave of omicron cases sweeping the world. (At 42m10)

This episode of The Conversation Weekly was produced by Mend Mariwany and Gemma Ware, with sound design by Eloise Stevens. Our theme music is by Neeta Sarl. You can find us on Twitter @TC_Audio, on Instagram at theconversationdotcom or via email. You can also sign up to The Conversation’s free daily email here.

Iwa Salami and Erica Pimentel do not work for, consult, own shares in or receive funding from any company or organisation that would benefit from this article, and have disclosed no relevant affiliations beyond their academic appointments.

Benjamin Curtis does not work for, consult, own shares in or receive funding from any company or organisation that would benefit from this article, and has disclosed no relevant affiliations beyond their academic appointment.