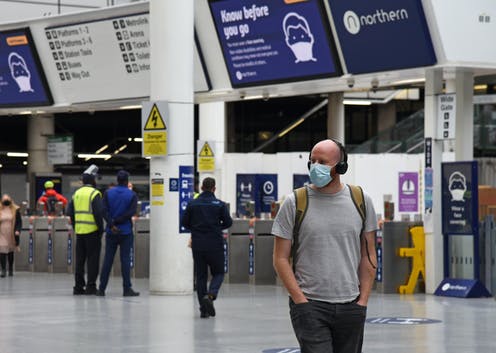 There’s no doubt that the UK’s railways have been hit hard by the pandemic. Recent figures from the Office of Rail and Road show a huge drop in passenger numbers, from April 2020 to March 2021. Over that period numbers fell at some previously busy stations like London Waterloo, by 86%. While numbers at Stratford, in east London, (the UK’s busiest station) fell by 67%.

Passenger numbers did rise over the summer of 2021 but the latest government statistics show rail use overall was at about 65-70% of pre-pandemic levels. This overall drop contrasts with the steady growth in rail use seen before COVID, with journeys doubling from 1994-2018. Now, with the announcement of the omicron variant, some people may shift away from public transport again.

Until train use recovers, a new approach to rail funding is needed. The UK government and devolved administrations must provide more funding and support for rail services and investment, or see long-term increased car use, increased carbon emissions and increased congestion.

Other countries are already revising their rail policies – for example the new German government coalition is committed to investing more on rail than road, and the Austrian government has introduced a “climate ticket”, giving access to all public transport.

The problem for the UK is that commuters are not coming back – at least not five days a week. Working from home, or hybrid working, is now established. One study showed that nearly 90% of those who worked at home during lockdowns wanted to continue to do so, at least some of the time. These people were concentrated in London and the south east and in more highly paid office jobs in city centres – precisely the people who have been the backbone of rail commuting in the past.

One global estimate suggests a 20% reduction in business travel while other research highlights people being worried about travelling on crowded trains and buses with others and have switching to cars (government statistics show that car traffic is almost back to pre-pandemic levels).

Even before COVID, the British model of running and funding the railways was under pressure. Privatisation has been highly controversial – critics have commented on the extra costs and poor service, and argued for reform. Stung by poor timetabling and other problems in 2018, the UK government accepted the need for reform. The Williams-Shapps plan for rail proposed major restructuring, with a new “Great British Railways” contracting companies to run services, managing the infrastructure and conducting long-term planning.

This restructuring may cut the costs of running the railways, but it is unlikely to make up lost revenue.

Read more:
HS2 Leeds branch cancelled: what will this mean for the north of England? – expert Q&A


There are various choices the government might make. One is cuts in services, from pre-pandemic levels. For example, there has been a consultation on the future of services for South Western Railways, which says demand is not coming back so services must be slimmed down. This resulted in a furious backlash from passengers. Some immediate cuts have been announced for the Bristol to London Waterloo service via Salisbury.

Another recent government decision is to trim back the plan for more high speed rail in the north of England, again with major public opposition. The government has abandoned one leg of its high-speed rail link (HS2).

Even the promised £96bn of rail investment is subject to “individual schemes proceeding subject to future approval at key gateways to ensure ongoing control of costs and value for money”. The lines which have already been scrapped would have created extra capacity for passengers and freight. It is as yet unclear whether the new plans will provide any extra capacity to allow growth.

Increased rail fares are also on the horizon – the government has continued with above-inflation fare increases (RPI+1%), with more to come. This contrasts with continued freezing of fuel duty for road transport and cutting air passenger duty on domestic flights.

Transport is the biggest source of UK carbon emissions. Researchers argue that what is needed is to cut the miles people drive as well as a transition to zero emission vehicles. So reducing demand for road transport is critical.

While a lot of travel is short distance, the small number of longer journeys account for a large proportion of carbon emissions from surface transport. Rail can play an important role in providing an alternative to car use for these longer journeys – pre-pandemic it accounted for 16% of journeys over 50 miles and 25% of journeys between 250 and 350 miles.

But this will require the UK government – especially the treasury – to take a new approach, supporting railways, and public transport generally, as the backbone for a zero carbon transport network. Current policies, with reduced rail services, increased fares and investment uncertainty will clearly be bad for the environment, as well as the economy.

Stephen Joseph is visiting professor at the Smart Mobility Unit at the University of Hertfordshire; hee is also a trustee of the Fooundation foor Integrated Transport and chairs the Smart Transport programme at Bauer Media