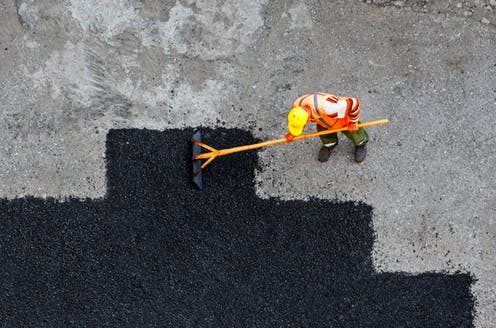 Stay at home. That was the stark rule imposed in countries around the world when the dangers of COVID-19 became fully understood. Only “key workers” whose physical presence at the workplace was deemed crucial were supposed to go to work.

The effect on working habits was dramatic. Sectors such as hospitality and retail suffered badly, and many jobs were put at risk. Overall, though, the worst impact of the pandemic on employment in the UK has been suffered by non-graduate men.

Unlike graduates, who were often able to “Zoom into the office” and keep working during lockdowns, non-graduates were less likely to be able to work from home. Instead, firms chose to place them on furlough or laid them off altogether. Non-graduate men were about twice as likely to lose their jobs compared to non-graduate women.

But non-graduate men losing their jobs is nothing new. In fact, it continues a 40-year trend of their employment status becoming ever more precarious in the post-industrial economy, where the manufacturing sector has declined. Their roles in processes like manufacturing production lines were either taken by machines or exported.

Why non-graduate men lost out

And it was non-graduate men that were driving these falling rates. The proportion of them in work fell from over 90% in 1980 to 75% in 2019, as can be seen below, while non-graduate women saw their employment rates increase over this period.

As manufacturing jobs disappeared, non-graduates found work in service-sector jobs such as hospitality, which could not be performed by machines. Non-graduate men, however, were less adept at securing these jobs than non-graduate women.

When non-graduate men could find work, the jobs they undertook were more likely to involve manual tasks. As shown in the chart below, in 2019 non-graduate men had jobs that contained, on average, around 45% manual tasks compared to 33% for non-graduate women. These manual job tasks could not be done in person during the pandemic.

At the same time, non-graduate men were less likely to fall into the category of key workers who continued working during the pandemic. In healthcare 75% of workers are women, while in education it’s 72% and in care work it’s 80%.

Whether or not non-graduate men will be able to find work again is likely to have a profound impact for both them and society. The decline in job opportunities available to them has already had dramatic effects. Research suggests that their economic angst helped fuel the populist movements of both Brexit and Donald Trump, in the belief that these would defend and promote their relative status.

The decline in job opportunities has also led to non-graduate men dying in far greater numbers than before. Both in the UK and the US, many who couldn’t find work over the past 30 years turned to alcohol and drugs as life became hopeless. They started to take their own lives in greater numbers as well.

In the UK, the number of middle-aged men dying from these “deaths of despair” has doubled over the past 30 years. In the US, the number has increased so rapidly, it has actually led to falling overall life expectancy.

What happens next is uncertain. The good news is that economic growth as the UK has emerged from the effects of the pandemic has led to falling unemployment. The bad news is part of the reason unemployment has fallen is because more than 150,000 people have stopped looking for work because they have retired or are sick.

Less educated workers find it harder to re-enter the labour market when they leave. It is likely that the UK’s economic recovery will also slow down in the next year as the government spends less money supporting it. Whether non-graduate men are able to find work in the post-pandemic economy will not be a matter just of employment, but of survival.

Jeevun Sandher does not work for, consult, own shares in or receive funding from any company or organisation that would benefit from this article, and has disclosed no relevant affiliations beyond their academic appointment.

2021-11-11
Previous Post: Corruption: how the UK compares to other countries
Next Post: Belarus: whether or not Putin is behind the border crisis, it plays into Kremlin hands