Succession season 3 episode 2 recap: It’s snake linguine out here – can Kendall get his siblings on side? 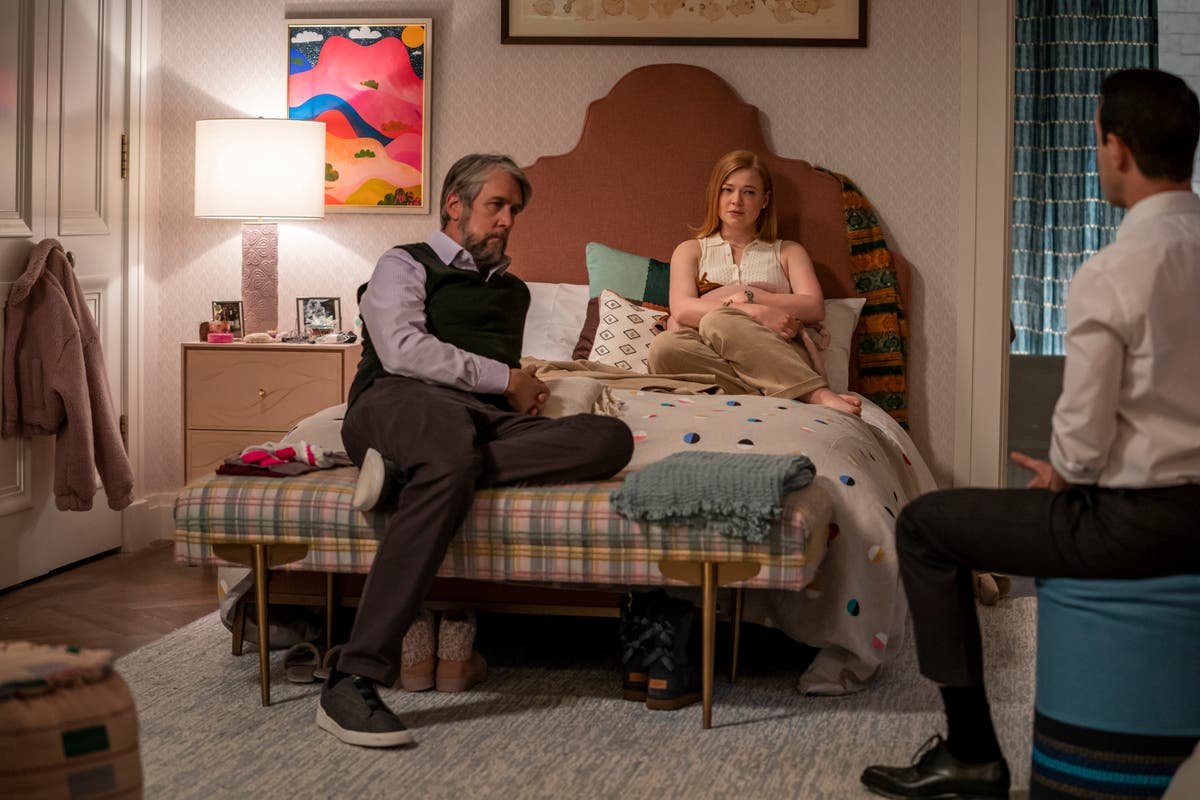 he Logan Roy we see in the opening moments of episode two is a far cry from the puppet master patriarch we love to hate. Marooned in a Sarajevo hotel room and unable to get through to Shiv (Sarah Snook) – whenever ‘Dad’ pops up on her phone screen, along with a photo of Saddam Hussein, she promptly declines the call – Logan (Brian Cox) seems isolated, at a loss as to his next move.

Back in New York, a pensive Greg (Nicholas Braun) seems to be having second thoughts about joining Team Kendall (Jeremy Strong), concerned about the legal ramifications of the top secret company papers that he pinched from Waystar to use as a bargaining chip. The spectre of the Congressional hearing still looms large (“I’m kind of too young to be in Congress so much,” he says when Kendall accuses him of “Judasing”) and Tom (Matthew Macfadyen) is bombarding him with creepy/wheedling/alarmingly breathy (delete as appropriate) phone calls.

Still smarting after being beaten to the CEO job by Gerri (J. Smith-Cameron), Shiv turns up at Kendall HQ (his ex-wife’s apartment), ostensibly there as her dad’s emissary to talk her brother into backing down. Kendall, meanwhile, goes full Jedi mind tricks on his sister, psycho babbling that she’s just jealous that he has acted out her subconscious desire to do the right thing, or something along those lines. “Right now, I’m the real you,” he says, gnomically, before making a more direct pitch: of all his siblings, Shiv is the one he really wants on side.

Over at Greg’s apartment, Manhattan’s most panicked man ends up trapped in a surrealist farce when an unspecified lawyer arrives at his door. Braun’s line reading of “Oh god, oh no, what now?” when he hears the knocking is an absolute treat, as is the moment he questions his law student friend: “Do you think he is probably my lawyer?” Is this Greg’s lawyer? Is it a lawyer provided by Waystar? Could he… subpoena Greg? Does the lawyer choose Greg or Greg choose the lawyer? All important questions, to which Greg does not know the answer, so it’s time to put in a call to ‘Gramps’ (James Cromwell), who agrees to help him secure independent legal counsel. A moment, please, for the Succession writer who managed to get Babe star Cromwell to say “that’ll do” to his gangly grandson.

Back at Kendall’s, who should rock up but Roman (Kieran Culkin), bearing airport gifts? He too claims he’s there simply to act as his dad’s spy, but like Shiv, he is pretty cagey about his motivations. Kendall, though, couldn’t be more explicit: “[Dad]’s over so let’s work together to take over and help him move on out.” In a bid for more privacy, the trio move their meeting to… Kendall’s teenage daughter Sophie’s bedroom. Soon eldest sibling Connor (Alan Ruck) turns up, recovered from the horror of a commercial transatlantic flight and ready to shout “Amen brother!” whenever anyone makes a point he agrees with.

Only Ken could earnestly rhapsodise about his moral crusade for Waystar (“our chance to pay our dues and wash our hands… for absolution”) in front of fairy lights and photos of Sophie meeting Billie Eilish and Harry Styles. He briefly dashes out for a limo rendez-vous with his frenemy and board member Stewy (Arian Moayed), assuring him that he can push his father out of the business. Is this enough to stop Stewy and Sandy’s hostile takeover? That remains unclear.

After being MIA for a few episodes, Marcia (Hiam Abbass) has a not-so emotional hotel lobby reunion with Logan. They’ve been estranged ever since Logan’s brief infatuation with Rhea (Holly Hunter), and Marcia isn’t keen to play happy families until some important documents have been signed. Documents, specifically, that will finally secure her place in the family trust and significantly improve her financial position.

Everyone, even Gerri, agrees that if all four Roy siblings teamed up against Logan, their father would be dead in business terms. Roman fears that the killing might not just be metaphorical either (plus, over the phone, Gerri opines that none of the siblings would survive the ensuing “snake linguine” unscathed, advising him to stick with her instead) so he’s out. So is Connor, for similar reasons (“I’m a national figure, it’s not right to kill one’s father”). Shiv, meanwhile, is offended that she can’t even secure the top job in Kendall’s hypothetical future Waystar, so she’s out too, leaving her “plastic Jesus” brother alone once again in his crusade.

There’s good news and bad news for Greg as the episode comes to a close. The good news: his grandfather has come good on his promise to secure him a lawyer. The bad news: the man he has hired appears to have wandered in from a Dickens novel, complete with Victorian facial hair, a borderline incomprehensible manner and an office filled with reams and reams of old case notes. And in defending his client, he also wants to “expose the structural contradictions of capitalism”.

Apparently buoyed by his reconciliation with Marcia, Logan decides it’s time to break cover and return to New York. When they touch back down on American soil, he stages a reunion with Roman for the photographers (and awkwardly leaves Gerri hanging when she offers him a handshake) while Shiv remains inside her 4×4. Booting Tom out of the backseat, Logan chooses to ride back into town with her, because he has a big offer to make: he wants to name her President of Waystar, “someone at the top with credibility… my eyes and ears”. And if the cruise shitstorm continues to rage? Shiv will remain clean, because she will be “wearing a full chemical and biological suit, going by the name of Gerri Kellman”.

In an episode full of veiled power plays, Marcia’s was the most explicit and the most effective. If she consolidates her position on the family trust (something that was the subject of fraught debate in season one) she will have greater say in the business’s future, and she looks set to secure a significant payout from her husband too. Let’s not forget, either, that Marcia knows all about Kendall’s watery detour at the wedding. Could she be about to remind Logan that he has one last, horrible blackmail card to play in this war?

Gerri remains circumspect about her new role – she’s savvy enough to realise that she’s essentially a figurehead, rather than someone with real power (“It’s like when you see a list of Popes and emperors and some of them have asterisks by their names”). But does she realise quite how willing Logan is to screw her over to keep his family clean? Surely this is where her alliance with Roman becomes important.

“Pinky” is still Dad’s favourite, it seems. In sidelining her from the top job, he’s found a way that she can exert (his) influence while remaining at a distance from the messy cruise scandal fall-out, using Gerri as a human shield. For a brief moment, though, it did seem that she could be swayed to join her brother, and Kendall’s tirade when she knocked him back proves just how much he’d counted on having her on side. She’s certainly the most in demand Roy sibling, for now at least.

It was a close call between this and the scaled-down Trojan horse from Stewy, but the “perfectly innocent, I’m sure safe to eat doughnuts” that Logan sent up to Rava’s apartment upon learning that all four of his children were gathered there were brilliantly sinister, prompting even the usually rational Shiv to warn Connor not to tuck in.

The man has spent two entire episodes cosplaying as a Jack Wills catalogue in red chinos and a padded gilet.

Quote of the week

Special mention goes to Roman’s response to Connor’s arrival, telling his siblings “I thought I heard a clown car pulling up” – so simple, so cutting, so cruel – but there can only be one winner, and that honour goes to Greg, explaining why he needs to get lawyered up. “If everyone’s showing up to battle in armour then I feel kind of exposed here in my loincloth,” he told his grandfather, whose appalled expression prompts him to add: “Bad visual.”

Succession continues Mondays on Now and on Sky Atlantic at 9pm

2021-10-25
Previous Post: Alan Ruck interview: Succession star on parenthood and power
Next Post: The Pixel 6 and 6 Pro are impossible to ignore