Newcastle United: buying a football club can still be lucrative – with the right business tactics 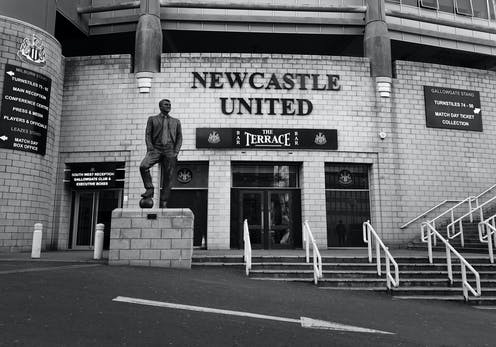 Many Newcastle United fans cheered the announcement on October 7 that their club had finally been sold for £305 million. The sale, to a consortium headed up by Saudi Arabia’s sovereign wealth fund, adds to a long list of clubs bought by the mega-rich, including Manchester City (owned by Sheikh Mansour), Arsenal (Stan Kroenke) and Chelsea (Roman Abramovich).

But why do wealthy people or states buy football clubs in the first place? What is it about owning a team in a volatile and generally loss-making industry where success on the pitch can never be guaranteed?

Certainly the more successful clubs are a safer financial bet than those further down the football pyramid, with the lower leagues regularly haemorrhaging money (the Championship notoriously spent an average of 107% of income on wages recently).

The Premier League meanwhile continues to flourish financially, with its clubs bringing in plenty of revenue. Collectively, they earned £4.5 billion in the 2019-20 season (the latest set of available accounts), and its members made up 12 of the top 30 clubs in the world by revenue.

So maybe owning a big club is a way to make big money? Well, it’s not quite as simple as that, and the old adage, that the quickest way to become a millionaire is by starting out as a billionaire and buying a football club, still holds some weight.

This is because revenue (money coming in) is not the same as profit (money that owners can add to their existing pile of money at the end of the season). So making a fortune is by no means a given, even in the Premier League.

Of course, there are other reasons for buying a football club, even a loss-making one. It may be fandom, ego, prestige or politics – indeed, the Saudi backed takeover of Newcastle has been labelled by opponents as “sportswashing”, the use of sport as a means of seeking legitimacy or improving reputations. The new owners have strongly denied that this is the case.

The easiest motive to understand is the fan who buys the club they’ve always supported. Few of us get to choose which club we align ourselves to – the choice is instead often made for us by family, friends or locality.

Being a fan is similar to being locked into a monopoly – there is no other option. So the best way to ensure that your club is run the way you think it should be is to buy it yourself, like businessman Tony Bloom with Brighton & Hove Albion or the TV chef Delia Smith with Norwich City.

Then there are owners that see a potential investment to take a loss-making club and turn it into a profitable one (or at least profitable enough to sell on at a higher price). You need to invest money to do this of course, but it is possible.

It is also possible to take a valuable club and make it less so. Mike Ashley may have bought Newcastle for £134 million in 2007 and just sold it for £305 million, but its relative value as a club compared to its competitors in the Premier League, fell over the period of his ownership.

But aside from the significant costs, the benefits of owning a football club can be seen in the expertise, brand expansion and saved costs of sharing resources across a business empire, which again is particularly apparent in the Premier League.

In total, seven (that’s roughly a third) of the current Premier League majority owners also own at least one other sports team, and three own other football clubs outside England. Arsenal owner Stan Kroenke has Colorado Rapids in the US. Brentford owner Matthew Benham has Football Club Midtjylland in Denmark. Manchester City owner Shekh Mansour has many clubs worldwide within the City Group.

Some teams (Arsenal again, Leeds and Manchester United), have owners who also have American football teams (NFL) as part of their sporting business portfolio.

That is not a coincidence. From sharing backroom staff to developing specialist equipment to sharing ideas, there is much to be gained from crossover industries. So perhaps, for these people at least, owning a football club is a clever business tactic after all.

Christina Philippou is a Newcastle supporter that teaches on the Premier League's EAM program..She is also affiliated with Fair Game, an organisation championing sustainability in football.

2021-10-12
Previous Post: China and Taiwan: why the war of words is unlikely to lead to military conflict (for now, at least)
Next Post: Is Boris Johnson facing his own ‘winter of discontent’? What the polls tell us