Uranium: what the explosion in prices means for the nuclear industry 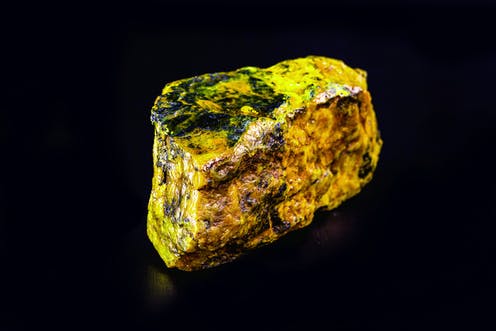 It is a year since Horizon Nuclear Power, a company owned by Hitachi, confirmed it was pulling out of building the £20 billion Wylfa nuclear power plant on Anglesey in north Wales. The Japanese industrial conglomerate cited the failure to reach a funding deal with the UK government over escalating costs, and the government is still in negotiations with other players to try and take the project forward.

Hitachi’s share price duly went up 10%, reflecting investors’ negative sentiment towards building complex, highly regulated large nuclear power plants. With governments reluctant to subsidise nuclear power because of the high costs, particularly since the 2011 Fukushima disaster, the market has undervalued the potential of this technology to tackle the climate emergency by providing abundant and reliable low-carbon electricity.

Uranium prices long reflected this reality. The primary fuel for nuclear plants were sliding for much of the 2010s, with no signs of a major turnaround. Yet since mid-August, prices have surged by around 60% as investors and speculators scramble to snap up the commodity. The price is around US$48 per pound (453g), having been as cheap as US$28.99 on August 16. So what lies behind this rally, and what does it mean for nuclear power?

The demand for uranium is limited to nuclear power production and medical equipment. Annual global demand is 150 million pounds, with nuclear power plants looking to secure contracts roughly two years ahead of use.

While uranium demand is not immune to economic downturns, it is less exposed than other industrial metals and commodities. The bulk of demand is distributed across some 445 nuclear power plants operating in 32 countries, with supply concentrated in a handful of mines. Kazakhstan is easily the largest producer with over 40% of output, followed by Australia (13%) and Namibia (11%).

Since most mined uranium is used as fuel by nuclear power plants, its intrinsic value is closely tied to both current demand and future potential from this industry. The market includes not only uranium consumers but also speculators, who buy when they think the price is cheap, potentially bidding up the price. One such long-term speculator is Toronto-based Sprott Physical Uranium Trust, which has bought nearly 6 million pounds (or US$240 million worth) of uranium in recent weeks.

Why investor optimism may be rising

While it is widely believed that nuclear energy should play an integral role in the clean energy transition, the high costs have made it uncompetitive compared with other energy sources. But thanks to sharp rises in energy prices, nuclear’s competitiveness is improving. We are also seeing greater commitment to new nuclear power stations from China and elsewhere. Meanwhile, innovative nuclear technologies such as small modular reactors (SMRs), which are being developed in countries including China, Canada, the US and Poland, promise to reduce upfront capital costs.

Combined with recent optimistic releases about nuclear power from the World Nuclear Association and the International Atomic Energy Agency (the IAEA upped its projections for future nuclear-power use for the first time since Fukushima) this is all making investors more bullish about future uranium demand.

The effect on the price has also been multiplied by issues on the supply side. Due to the previously low prices, uranium mines around the world have been mothballed for several years. For example, Cameco, the world’s largest listed uranium company, suspended production at its McArthur River mine in Canada in 2018.

Global supply was further hit by COVID-19, with production falling by 9.2% in 2020 as mining was disrupted. At the same time, since uranium has no direct substitute, and is involved with national security, several countries including China, India and the US have amassed large stockpiles – further limiting available supply.

When you compare the cost of producing electricity over the lifetime of a power station, the cost of uranium has a much smaller impact on a nuclear plant than the equivalent effect of, say, gas or biomass: it’s 5% compared to around 80% in the others. As such, a big rise in the price of uranium will not massively affect the economics of nuclear power.

Yet there is certainly a risk of turbulence in this market over the months ahead. In 2021, markets for the likes of Gamestop and NFTs have become iconic examples of speculative interest and irrational exuberance – optimism driven by mania rather than a sober evaluation of the economic fundamentals.

The uranium price surge also appears to be catching the attention of transient investors. There are indications that shares in companies and funds (like Sprott) exposed to uranium are becoming meme stocks for the r/WallStreetBets community on Reddit. Irrational exuberance may not have explained the initial surge in uranium prices, but it may mean more volatility to come.

We could therefore see a bubble in the uranium market, and don’t be surprised if it is followed by an over-correction to the downside. Because of the growing view that the world will need significantly more uranium for more nuclear power, this will likely incentivise increased mining and the release of existing reserves to the market. In the same way as supply issues have exacerbated the effect of heightened demand on the price, the same thing could happen in the opposite direction when more supply becomes available.

You can think of all this as symptomatic of the current stage in the uranium production cycle: a glut of reserves has suppressed prices too low to justify extensive mining, and this is being followed by a price surge which will incentivise more mining. The current rally may therefore act as a vital step to ensuring the next phase of the nuclear power industry is adequately fuelled.

Amateur traders should be careful not to get caught on the wrong side of this shift. But for a metal with a half life of 700 million years, serious investors can perhaps afford to wait it out.

2021-09-24
Previous Post: Foundation: an introduction to five major themes in the work of science fiction writer Isaac Asimov
Next Post: 27 of the best shows on Disney+ right now