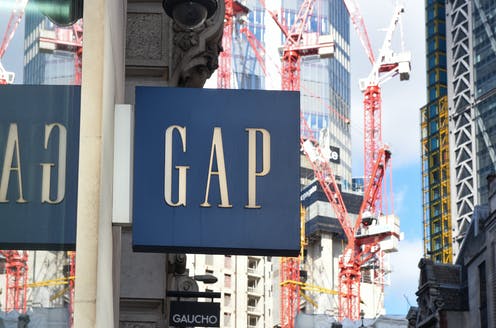 In 1969, Don Fisher was having difficulty finding the right size of Levi’s jeans in traditional clothing stores. His solution was quite radical. Together with his wife Doris, he opened his own store, The Gap, selling a large selection of the product Fisher had found so hard to buy.

A year earlier, across the Atlantic, an Italian family business called Benetton, had opened its first store, entering the mass fashion market with a slightly different approach. Rather than branded clothes, Benetton began by selling knitwear they made themselves.

From these humble beginnings, both The Gap and Benetton went on to become hugely successful fashion retailers. At one time, their superiority within the sector was such that they assumed the status of “category killers” – chains so big that they threaten the survival of smaller competitors.

A key feature of category killers – other famous examples include Toys “R” Us, Home Depot and Staples – is the convenient availability of specific, affordable products. It is a retail format based on a clear understanding of what it is the customer wants and satisfying that demand at low cost.

With the announcement this summer that Gap would close all its stores in UK and Ireland, and with Benetton no longer at the frontier of cool, the idea of these brands once being so dominant seems fairly strange.

But the influence of these category killers on today’s fashion industry remains, with a history that is still relevant to current leading players like Primark, ASOS and Boohoo at a time of huge flux in the retail landscape and immense pressure on established supply chains.

From the very beginning, for example, The Gap had a crystal clear vision of its customer base. Opening the first store close to San Francisco State University, Fisher wanted to appeal to college students and the counterculture generation.

To attract them, early Gap stores also sold records, but these were soon dropped. Although prices were not discounted, they were priced moderately and keen enough to convince that core demographic to shop there.

Benetton, meanwhile, capitalised on its initial popularity by expanding rapidly in the 1970s. Having multiple stores in a small area meant the company could dominate local markets, generate high sales volume and efficiently manage their distribution network.

A key difference between Benetton’s clothes and those available at their competitors (typically department stores) was Benetton’s bright colours. Dyeing garments at the last minute meant the company could be flexible and responsive, reacting quickly to changes in demand.

Also critical to the company’s success was its use of sophisticated inventory control and its organisation of a network of suppliers, originally located close by in north-eastern Italy. Being able to track stock and know what was selling and where meant Benetton could plan the flow of supply to stores, while designing and producing clothes consumers wanted to buy.

In the US, The Gap was transforming how Americans shopped and dressed, with a shift in focus from Levi’s jeans to the ubiquitous khakis and pocket T-shirts. Stores were redesigned, but the focus on a narrow line of products at affordable prices in convenient locations remained. Like Benetton, Gap’s adoption of computers to control inventory was critical to their superior ability to satisfy customer demand.

Of course, other retailers sought to emulate some of these breakthroughs. In 1975, a Spanish clothing manufacturer, run by Amancio Ortega opened its first Zara store. Zara’s business model soon centred on satisfying changing customer demand at speed.

Then, as the power of technology accelerated rapidly, and trade barriers continued to fall, the opportunity for retailers to source material more cheaply from Asia increased, leading to the formation of buyer driven global value chains in the clothing industry.

The dizzying pace of change brought on by these developments has led to the global fashion industry we know today. It is fast (some might say too fast), convenient and agile. Amazon recently became the number one clothing retailer in the US and the likes of ASOS are performing well.

While the Gap and Benetton laid the foundations for these changes, the power of these once edgy and daring radicals has diminished. New successful fashion brands, like Reformation, Sezanne and Rapanui are likely to mix online with bricks and mortar retailing, and make sustainability a core part to their offering.

But the approach of The Gap and Benetton – solving a problem, being different, prioritising convenience, reacting to change – is worth mirroring for today’s industry innovators. As consumer awareness of the environment increases and as e-commerce accelerates even further, the business acumen which made those companies so successful is unlikely go out of fashion.

Thomas R Buckley does not work for, consult, own shares in or receive funding from any company or organisation that would benefit from this article, and has disclosed no relevant affiliations beyond their academic appointment.