The Ronaldo effect: what big players mean for the business goals of clubs like Manchester United 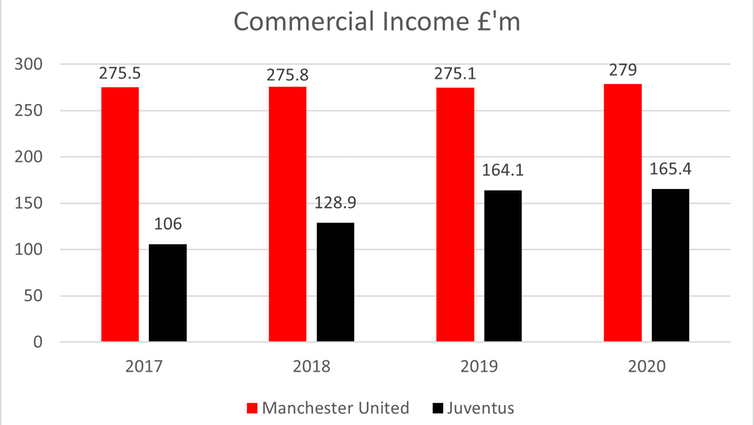 The prodigal son returns. In the last few days of a frenzied football transfer window, Manchester United pulled off a dream signing, welcoming Cristiano Ronaldo back to his former club.

Excitement over his return to the Premier League is high – and with good reason. There are only a handful of sports stars on the planet who can generate this kind of global interest.

But how does a player of Ronaldo’s professional stature affect the business side of a major football club? Where are the key financial wins generated by sporting superstars?

In football transfer fee terms, Ronaldo returns to United with a relatively cheap price tag. He has signed a two-year contract (with the option to extend) for an initial fee of £12.86 million and the potential for an additional £6.85 million in performance related bonuses.

This is primarily down to his age. At 36, he is approaching the end of his playing career, and the fee reflects this, even though his performance level remains high. That performance factor is reflected in his salary, which is set to be around £385,000 per week

Adding these numbers together crudely shows a total cost to Manchester United in the region of £60 million. The club have also shown shrewd business tactics by managing to spread the payment over five years.

In return, United hope Ronaldo’s skill will enhance the club’s chances on the pitch. But the bigger picture is the commercial edge he can bring.

Certainly the power of his personal brand (he is widely known as “CR7” after his initials and preferred player number) – not withstanding the ongoing civil lawsuit against him for allegations of rape, which he denies (criminal charges were ruled out) – instantly extends the club’s international reach and appeal.

Ronaldo currently boasts half a billion followers across social media, compared to Manchester United’s 140 million, and the announcement of his signing sparked 12.5 million likes on Instagram. Converting this reach into cash is critical.

Ronaldo has already increased United’s shirt sales to a record breaking amount. But it is Adidas which will see the initial benefit, with the German kit manufacturer paying a license fee to reproduce the famous red shirts. That said, United’s current deal with Adidas is already football’s biggest, and the Ronaldo effect should allow the club’s executives to push up the price when it comes to renewal.

United’s broader business operations should also see a significant boost. Sponsors will be falling over themselves to partner with United, and it is possible the club could make an additional £30m in commercial arrangements in the next couple of years.

And while exact numbers are difficult to predict, we can look to Ronaldo’s last club, Juventus, for a guide. The Portuguese moved there from Real Madrid in 2018, and the next two years show considerable commercial growth for the Italian club.

Of course, that’s not all down to Ronaldo, but he certainly helped. While he was in the squad, Juventus renegotiated deals with Adidas and Jeep, and signed a new one with Konami in Japan who cited the “Ronaldo effect” as a major reason behind the partnership.

Manchester United meanwhile already generate significant value from commercial deals and Ronaldo will help boost those numbers. The team and the player have been described as “match made in heaven”, with the share price of the club jumping before Ronaldo had even kicked a ball back in Manchester.

Longer-term gains can be expected in the next couple of years, and if he helps the club to win trophies, the numbers could be mind boggling. Those numbers will no doubt be studied by the top European clubs as they desperately look for the next Ronaldo and Messi, encapsulated by Real Madrid’s recent failed attempt to land Kylian Mbappe from Paris Saint-Germain. (Expect him to be the next big move in January 2022.)

The football industry in general is concerned about a changing market where the relationship between the game and young people appears to be deteriorating. Recent research found that 40% of respondents in seven countries (including England, Poland and Brazil) aged 16-24 had no interest in football, sparking fears of a “missing generation” of fans.

As a result, clubs are searching for new ways to engage. Anything that extends the reach in younger age groups is of huge interest to club owners, so Ronaldo’s social media presence is yet another box ticked.

The attachment between fans and a favourite player is also of increasing importance, particularly in emerging markets. In India for example, nearly a third of fans say that allegiance to a player influences their support for a club.

For Manchester United, there is clearly money to be made from the return of CR7. The club will gain new fans and new deals – and if he scores goals and wins matches, maybe even a shiny new trophy.

2021-09-12
Previous Post: COVID-19: further lockdowns unlikely but some winter restrictions are possible
Next Post: Teaching Radiographer at University of Bristol