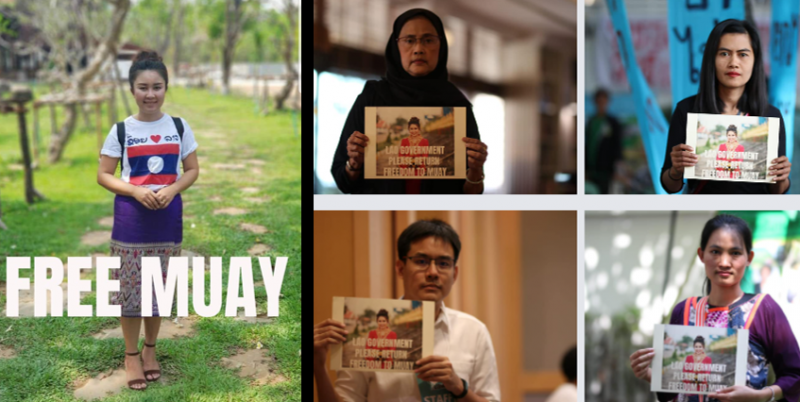 Activists from several Asian countries are supporting the #FreeMuay campaign.

Several human rights and media groups have called for the release of Houayheuang Xayabouly, also known as Muay, who has been in detention since September 2019 for posting a Facebook video criticizing the Laos government’s response to a flooding disaster. Since September marks the first year of Muay’s detention, civil society groups launched a campaign calling for her release.

Muay is a 31-year-old mother, tour guide, shop owner, and a prominent environmental advocate. Her videos highlighting local corruption and illegal business practices have made her a net idol (term for social media influencer in countries like Laos and Thailand).

After a flooding disaster in late August and early September 2019, Muay went on Facebook Live to express her dismay over the slow arrival of government aid for victims. In the video, she said:

In this emergency situation, I am not in need of food and water yet, but yesterday [September 4], a huge flood came and people here were up on the roofs of their houses trying to escape. Where is the helicopter for rescuing those people?

I cannot be silent as we have been in the past. The era of the regime keeping the eyes and mouths of the people closed has come to an end.

She was arrested on September 12 and faced investigation for criminal defamation and distributing anti-state propaganda under article 117 of the Criminal Code. The Lao state media reported that she confessed her crime. She was convicted in November and sentenced to five years in prison.

Civil society groups which are campaigning for Muay’s release believe that she was jailed because of her social media posts exposing government anomalies such as exorbitant toll collection, corruption in the hiring of state employees, land grabbing, anti-environmental practices of Chinese investments, the impact of big dams on villagers, and negligence in providing aid to flood victims.

She contributes to the protection and respect for the rights of the Lao people, by highlighting the harms caused from business activities and corruption, as well as calling for solutions to redress the same.

As a result of Muay’s contribution to ensure the protection and respect for the rights of the Lao people, she was made an example of by the government of Lao People’s Democratic Republic.

The long prison term for Muay is meant to deter the public from criticizing authorities, said Andrea Giorgetta from the Bangkok office of the International Federation for Human Rights.

The incredibly harsh prison sentence against Mouay is designed to send a warning to the entire population that no dissent and no criticism of the government is acceptable.

UN Human Rights Experts have sent a letter to the Laos government seeking information about Muay’s case aside from expressing concern about her prolonged detention.

We wish to express our concern regarding the sentencing of human rights defender Ms. Xayabouly for the legitimate exercise of her right to freedom of opinion and expression. We are particularly concerned that the arbitrary detention and lengthy prison sentence handed down to her may have a chilling effect on civil society in the Lao PDR discouraging human rights defender and other members of civil society from sharing opinions on the observance of human rights in the country.

This was confirmed by Mary Lawlor, UN Special Rapporteur on Human Rights Defenders, in a tweet posted on September 17

Joint communication sent to the Government of #Lao on 13 July 2020 on the sentencing of #WHRD Houayheuang Xayabouly now available: https://t.co/Q7191yZ9tZ @ManushyaFdn pic.twitter.com/5NPp2w2IB5

An article written by Netiwit Chotiphatphaisal and Suppakrit for New Bloom magazine narrates Muay’s journey from being a tour guide, shop keeper, and environment advocate into a net idol with thousands of following.

This dark time in Laos makes us realize that young people in Laos who grew up in a time when information is not that easily controlled are challenging the long obstruction of freedom and human rights which has lasted for over 40 years in Laos. Muay was one of their most important inspirations.

The article appeals for global solidarity for Muay:

Muay is a regular person who loves her country, her community, her land, and the forests there. She was not afraid to speak out, speak up for the people, for the trees which are being destroyed to build dams, against corruption in Lao and against Chinese companies.

Muay bravely stood up to protect the environment. She was acting on behalf of Laos and the world in doing so. Muay does not deserve to be let alone imprisoned from taking this stand.

Laos imposes a strict control on news reports. Because of this, many Lao citizens have been looking for alternative stories on the internet, including Facebook.

Muay’s case reflects the increasing harassment faced by Lao internet users for voicing out their sentiment on social issues. On August 26, Sangkhane “Thitsy” Phachanthavong was arrested for complaining about corruption on Facebook.

2020-09-24
Previous Post: How US disease control shaped colonial power politics in the Caribbean
Next Post: Parkinson’s disease can affect the eyes – here’s what we know so far