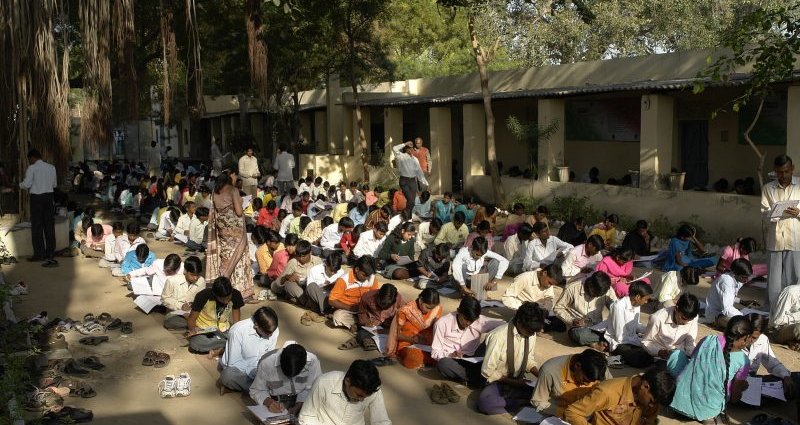 End of the year exams (maths, 10th class) in Mahatma Gandhi Seva Ashram, Jaura, India. All the students are grouped on a compound out of the school. Photo from 2010. By Yann Forget / Wikimedia Commons / CC-BY-SA.

Around 2.8 million Indian students sat university examinations from the end of the August to September 13 as the country approaches the grim milestone of 5-million total COVID-19 cases.

Despite pleas from civil society to defer examinations, including by Swedish climate activist Greta Thunberg, a Supreme Court ruling on August 17 gave the government the green light to keep the original schedule for the engineer and medical colleges entrance exams.

The JEE and the NEET, how university exams for those two careers are called, are India’s most competitive — they sprawl industries of their own, with preparation courses generating millions of dollars annually.

The court bench headed by Justice Ashok Bhushan said that “the career of the students cannot be put on peril for long and a full academic year cannot be wasted.” The court will not hear any further petitions regarding postponing future exam dates.

Students are being sent out of the centre after the exam in batches. #NEET2020 @THChennai pic.twitter.com/McnRO1de89

NTA informed me that around 85-90% students appeared in #NEET exam today. I sincerely thank all Chief Ministers and @DG_NTA for proper arrangements made to facilitate student participation. #NEET participation reflects the tenacity and grit of young #AtmaNirbharBharat .

According to the Ministry of Education, 74 percent of the students registered to the first of the JEE took the exam, while an above 80-percent attendance was observed for the NEET exam.

Students are now gearing up for the second stage of the JEE (the JEE Advanced), which will take place on September 27. Protests against the exam date have dwindled since the Supreme Court decision.

In addition, Indian schools outside of containment zones are preparing to resume offline classes starting September 21, despite protests from parents, teachers and activists to also postpone school reopening.

Containment zones are geographical areas, usually of a three-kilometre radius, where a high number of COVID-19 cases have been reported. Most activities are restricted in the containment zones, with only essential services being allowed to function.

The schools allowed to resume classes will have to follow guidelines issued by the Ministry of Home Affairs and the Ministry of Health & Family Welfare, including mandatory mask-wearing, physical distancing, and enhanced cleaning of facilities.

India’s schools have been closed since March when the central government imposed one of the world’s strictest lockdowns.

During the month of August, protests against the government’s maintaining of university examination dates erupted in pockets across India.

JEET-NEET brings in yet another student protest. . .

JEE Main is scheduled from 1st to 6th September, and the NEET is slated to be conducted on September 13th. .

In Kolkata, several students holding placards can be seen protesting over the decision. . .

Students across India have been up in arms demanding that the examinations be delayed. Countrywide student protests have continued non-stop — from Bihar, Gujarat and Assam, to those in Jammu and Kashmir where internet restrictions continue making preparation for exams a challenge. . . .

Students’ concerns ranged from possible agglomeration in test centres and means of transportation to them. Many suburban and rural areas are also under containment zones, where transportation is restricted.

Besides, the states of Bihar, Asam and Gujarat were heavily struck by floods in recent weeks, affecting the students’ ability to prepare for the tests.

The National President of the All India Students’ Association (AISA) N Sai Balaji tweeted on August 22:

#INDIAunitedtoPostponeJEE_NEET
Students are begging for life and you are rigid to take exam. No “logic” can win over “Life” .
Consider your decision, they do not want to risk their family lives @DrRPNishank

The hashtag #StudentLivesMatter has been trending in India since July, and #JEENEETpostpone since August.

Online protests often used satire, with memes and elaborate videos arguing that students should not be forced to risk theirs and their families’ health in order to sit the exams.

Celebrities and social media influencers also joined the campaign to postpone the exams.

Some students have pointed out the irony of the Supreme Court ruling that obligated students to sit exams amid the pandemic was made via conference call.

Students also mass disliked a video by Prime Minister Narendra Modi on YouTube in which he praises the educational system for “raising to challenges” posed by the pandemic and the government’s response overall. Modi doesn’t address the JEE and NEET issue in the video.

Over the next two weeks, more than 2.4 million Indian students will answer the medical entrance test NEET, and the Joint Entrance Exam (JEE), a qualifying exam for engineering schools, which commences today. The government has refused to defer these exams despite vociferous protest from students and opposition parties. Since then, aspiring engineers and doctors have protested the government decision by spamming Prime Minister Narendra Modi’s recently uploaded YouTube video with more than 900,000 dislikes and 155,000 comments. Click the link in bio to know more about why students are angry and worried about answering highly competitive exams in the country with the highest daily tally of COVID-19 cases. (via @viceworldnews)