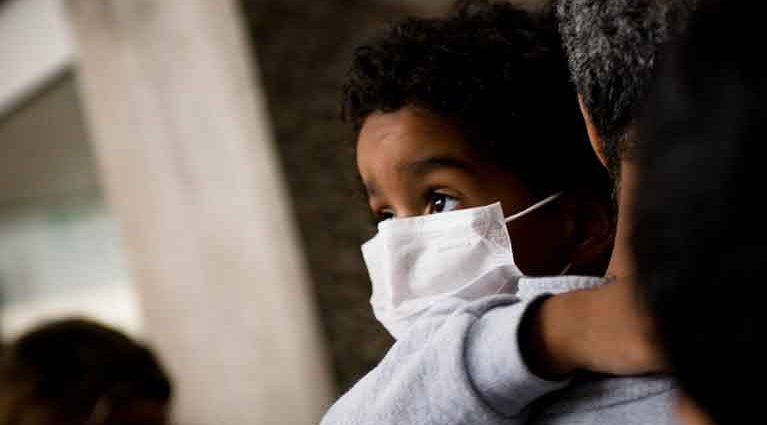 A boy wears a mask while being held by his father. Photo by Xavier Donat via Flickr under CC BY-NC-ND 2.5.

Is French TV replicating the same processes? Often accused of segregation against minorities, especially black people, French TV has not corrected itself. Coverage of the COVID-19 pandemic is a case in point.

On March 12, a record 35 million people watched president Emmanuel Macron explain that he had decided to impose a nation-wide lockdown to prevent the spread of the novel coronavirus.

Almost immediately, major TV networks began to organize lengthy debates featuring doctors, researchers and public health specialists from the most reputable hospitals, schools or laboratories in France, Switzerland and the USA. Millions of citizens held their breath as these experts conveyed, day after day, key information that would assuage our fears and potentially save lives.

While informative, these daily debates revealed a sad and painful truth: In today’s ethnically diverse France, people who appeared on TV because they were deemed uniquely qualified to explain global crises and suggest solutions to the world’s problems had the same skin color. They were all white.

Coincidentally, in its annual report on the fight against racism, antisemitism and xenophobia by the French National Consultative Commission on Human Rights (CNDH), one of its major 2020 recommendations are as follows:

The CNCDH calls on the Higher council for the audiovisual sector (CSA) to encourage representation of black men and women, including in advisory roles.

The recommendation only confirms what dozens of articles, papers and websites had been denouncing for several years now—that too often, French TV networks fail to present minority personalities in positive, leadership positions. This is significant because television has the power to manufacture role models and thus empower young people of all origins.

Attempting to correct an age-old disregard for minorities

France, a former colonial power, is well aware that it needs to do a better job of promoting and integrating minority people.

A 2013 study by Catherine Ghosn compared minority representation on American, Belgian, British, Canadian and French TV. Ghosn noted that French policies in this area are much less effective and efficient than for all the other countries in the study.

In 2007, scholar Catherine Humblot observed that although France has shown progress in its portrayal of minorities, much remains to be done. She explains, for example, that it was only in 2006 that a major French channel took the bold decision to have black journalist, Harry Roselmack, present primetime news—and that was only on an interim basis. In comparison, that same year, according to Dutch journalist, Stefan de Vries, the first black woman to present the news on Dutch TV entered retirement.

More than half the children in American schools are students of color, but their teachers are overwhelmingly white. [Tonight] we hear from an African-American biomedical engineer on why it is so important to see ourselves in front of the classroom.

Dr. Elizabeth Wayne had a powerful experience at graduate school when she attended a conference featuring a speaker who was a black woman. Wayne explained:

I had never realized that I had never had someone who looked like me, teaching me. … I have always thought that seeing is believing …

Wayne’s discovery was published and later discussed in over 700 articles. She says that some of the e-mails she received were from people who told her: “I have never seen a black woman in a lab coat being pictured as having contributed to a major discovery.”

Is the problem in France perhaps of a different nature? Could it be that France has too few minority specialists from the medical profession? Probably not. In 2007, the French daily Libération quoted  United Nations official Habib Ouane, who said: “There are more Beninese physicians in Ile-de-France alone than in Benin itself!”

There may well be a sinister reason why minorities, especially black people, are constantly cast in specific stereotypical roles on French TV. Of course, great minority role models in entertainment are essential and minority youth often look up to them, knowing they can one day be an Oscar winner or Olympic legend. But what about promising minority young scientists who could help discover the next cure?

The media—especially TV—plays a significant role in how individuals see themselves. Television can help create positive minority role models for children, helping them reach beyond what they ever thought possible.

We’ve all heard the story of “the eagle who lived like a chicken”: After falling from his nest, an eaglet lands in a chicken farm where he is quickly adopted by the chicks. He grows up thinking he is a chicken. One day he meets an older eagle who teaches him to fly and helps him develop his true potential.

The politics of continuous and systematic segregation on the part of French TV will not only prevent the emergence of positive minority role models but may well exacerbate social tensions by consolidating old ghettos.

2020-09-08
Previous Post: Why businesses embrace populists and what to do about it: lessons from Hungary
Next Post: NMR expands field team with three new recruits