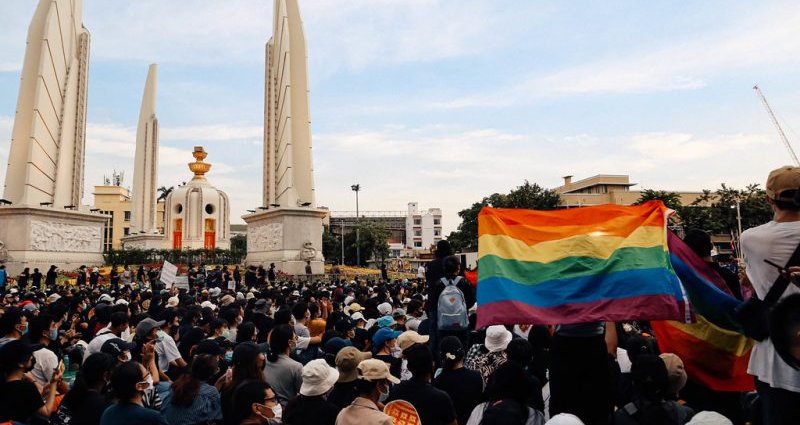 People gathering around the Democracy Monument during the August 16 protest. Photo and caption from Prachatai

The mass protest at Democracy Monument in Bangkok on August 16 has now been dubbed the largest protest in Thailand since the 2014 coup. More than 20,000 people joined the demonstration which started at 3 pm and went on until around 11 pm.

On the main stage, speakers took turns giving speeches about many issues from violations of human rights in schools, gender equality, and labor rights to the issues facing people in the southern provinces. They also continued pressing for the three demands made at the mass protest on July 18: stop harassing citizens, draft a new constitution, and dissolve parliament.

The group also added that the demands are made on the conditions that there must not be a military coup or a national unity government and that there is “one dream,” in which they hope to see a democracy with the monarch under the constitution.

Prachatai spoke to a number of participants who attended the demonstration.

The standpoint of all three organizations is always to support democracy, therefore, whatever we do, we will stand on the side of democracy, and help those who share our ideology here.

“Here for our child’s future”

A family with a young child came from Pathum Thani [central Thailand, north of capital Bangkok] to join the demonstration, holding a sign saying “Here for our child’s future”. When asked about their dreams of the future, the parents said that they would like to see a more equal world and a new government.

While there is an impression that protesters are often students, the couple noted that they also notice working people and older people joining the protests. They also said that the protesters were friendly and were there because of something they believe in.

It’s time that change needs to happen. Right now, frankly, we’re not here for our own future, but for our child’s future. He shouldn’t have to grow up with something like this, so we have to join and show our power. Even if we’re just a small voice, we want to come and encourage everyone. 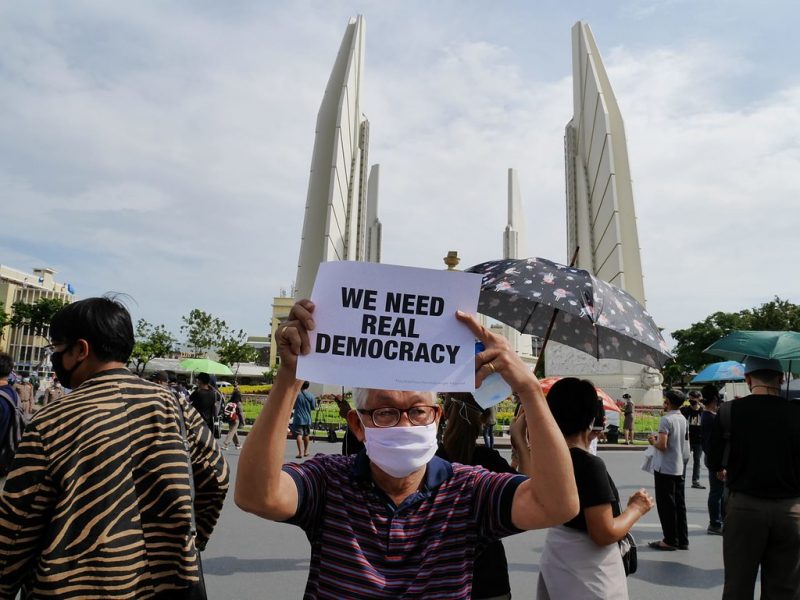 A senior citizen protester holding a placard at the Democracy Monument. Photo from Prachatai.

A senior citizen was seen at the Democracy Monument holding a sheet of paper with the message: “We need real democracy.” When asked why he joined the protest, he said:

I came to the protest because I have never seen any prime minister lie to the people this much in my life. He lied to other countries that we don’t have violations of rights. He lied that he will listen to the young people, but people still get harassed. What I would like to see the country change is that it has to follow the students’ 10 demands. Those 10 demands are the best. If we could do it, then the country will really be a democracy.

2020-09-01
Previous Post: Young Cubans capture beauty and resilience with photographs of the COVID-19 lockdown · Global Voices
Next Post: Free ports could help Britain take back control and keep trade flowing with the EU