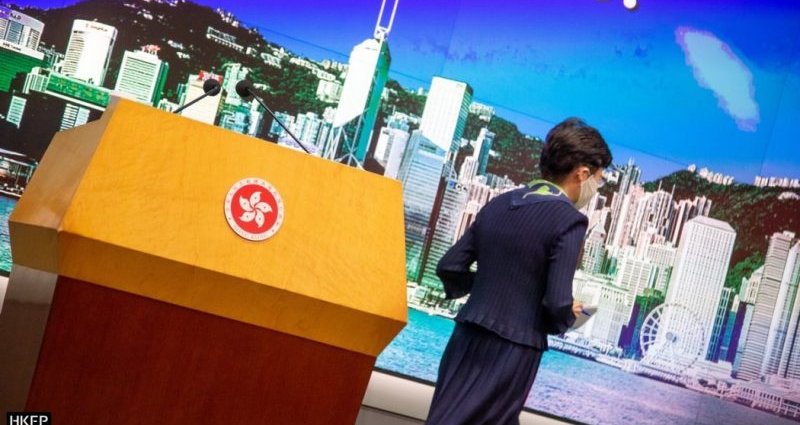 A summary of key developments in August

This post, written by Jennifer Creery, was originally published by Hong Kong Free Press on September 1, 2020. The following version was lightly edited and is published via a content partnership with Global Voices.

Hong Kong’s national security law has thrown a city scarred by months of political unrest into further uncertainty, as millions continue to adjust to a new normal. Two months after its enactment, pro-democracy activists been rounded up and government officials targeted with tough sanctions amid an increasingly hairy diplomatic dispute between superpowers.

Below is a summary of key developments in August, two months after the new legislation that criminalises subversion, secession, foreign interference and inference with transportation and other infrastructure, came into effect.

Spiralling tensions with the US

In one of the boldest punitive actions yet, Washington imposed, on August 7, sanctions on 11 individuals accused of undermining Hong Kong’s “autonomy and restricting the freedom of expression or assembly of the citizens.” Chief Executive Carrie Lam, police chief Chris Tang, ex-police commissioner Stephen Lo, security secretary John Lee and justice secretary Teresa Cheng were among those listed, in a move designed to bar them from the US financial system.

Weeks later, US authorities officially axed three bilateral agreements with Hong Kong on extradition and tax exemptions, while demanding exporters label their goods “Made in China” instead of “Made in Hong Kong” following the cancellation of the city’s special trading status.

France joined a growing list of countries suspending their extradition treaties with Hong Kong in light of the security law. Previously, Canada, the UK, Australia, and New Zealand – part of the “Five Eyes” intelligence alliance – decided to do the same. Germany, meanwhile, halted their agreement due to the city’s decision to push back its legislative election by one year in light of the COVID-19 pandemic.

Flooding into the offices of the maligned pro-democracy tabloid Apply Daily, hundreds of police officers conducted their most daring raid yet under the security legislation. They also nabbed owner Jimmy Lai, his two sons and four top staffers during the August 10 operation.

Local media reported that the Next Digital media mogul was arrested on suspicion of colluding with foreign forces – an offence under the new law – as well as fraud. Next Digital’s CEO, Cheung Kim-hung, CFO Royston Chow and COO Chow Tat-kuen were among those apprehended. Executive Mark Simon, who is overseas, remains wanted.

Later in the evening, the force arrested 23-year-old Agnes Chow – an ex-member of the now-disbanded political group Demosisto – and two former student activists, including a freelancer for the UK’s ITN Wilson Li also on suspicion of colluding with foreign forces.

Multiple pro-democracy figures complained of being tailed by unknown individuals in August. Sunny Cheung, a former spokesperson of the now-disbanded Hong Kong Higher Institutions International Affairs Delegation, wrote in a now-deleted post that he suspected three of his alleged stalkers were national security personnel.

Agnes Chow wrote on Facebook that “suspicious men” had appeared around the clock outside her house, filming using their phone and appearing to work in shifts.

Police tackled Democratic Party lawmaker Ted Hui to the ground after he confronted people inside a vehicle he believed had been following him. Beijing-funded Ta Kung Pao later confirmed the men were reporters for the newspaper.

Vice-Convener of the Civil Human Rights Front Figo Chan also complained of two men wandering around a radio station where he and fellow convenor Jimmy Sham were recording a programme on August 14.

Amid increased scrutiny of overseas military training, the UK announced it would temporarily halt its military training arrangement with the Hong Kong Police Force. A spokesperson for the ex-colonial power cited coronavirus restrictions but also highlighted Westminster’s concerns over the effect of the security law on civil liberties.

The Catholic diocese also asked its primary and secondary schools to enhance students’ awareness of the security law and cultivate “correct values on national identity,” while guarding against campus politicisation.

Meanwhile, the city’s public broadcaster RTHK removed an interview with exiled ex-lawmaker Nathan Law, citing concerns over publishing material relating to an interviewee reportedly “wanted” on suspicion of violating the security law. There are no laws or regulations which state that the press cannot interview activists sought by police.

Foreign nationals hoping to work in Hong Kong have suffered months-long visa application delays and fewer approvals, often without explanation. The city serves as the Asian headquarters for many overseas companies and international news organisations.

Both Stand News and The Standard cited sources as saying work visas for journalists were being vetted by a new national security unit within the Immigration Department, stoking press freedom concerns.

In July, Hong Kong authorities refused to renew the work permit of The New York Times correspondent Chris Buckley, who was ousted from China amid a diplomatic dispute. The US newspaper also cited uncertainty over Hong Kong’s prospects as a regional hub in its decision to move half of its operations in the territory to the South Korean capital of Seoul.

The practice of denying or issuing short work visas to journalists is often seen in the mainland, where tighter reporting restrictions exist.

At around 9 a.m. on August 23, China’s marine police detained 12 people believed to be Hong Kong activists on a speedboat headed to Taiwan near Ninepin Islands, according to the Guangdong Coast Guard’s official Weibo account. It said the individuals were suspected of unlawfully crossing a national border.

Local media reported that activist Andy Li was among those seized. He was arrested under the national security law on August 10 during a round-up. All onboard the vessel were criminally charged – including in connection with homemade bomb cases – and had been released on bail.

2020-09-01
Previous Post: Face masks: why your eyes might be saying more than you realise
Next Post: Ant Group: why America is missing out on the biggest IPO in history