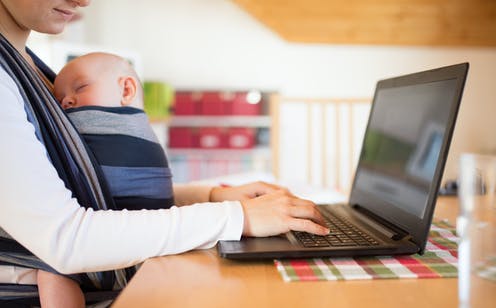 The student loans system was supposed to be a safe and fair way for everyone who seeks further education to get the funds they need. But the system is broken and women – particularly mothers – are bearing the brunt.

It may come as a shock to some, but women on maternity leave in the UK who are paying off their student loans still accrue interest when they are on leave. Loan repayments stop if their income drops below £26,575 – but the interest doesn’t. It means that women graduates are effectively being financially penalised for having children.

But the motherhood penalty is just the start of the story. Women are already subjected to workplace and societal inequality and suffer most notably from the gender pay gap. Full-time employed women earn on average 8% less than men for the same work. This means that women are being paid thousands of pounds less a year. That figure is even more alarming considering that women owe around two-thirds of student loan debt in the UK.

Graduate women on maternity in the UK take longer to pay off their student loans in full. The UK government has estimated that for students starting university from 2006, the average student loan debt on graduation would take an average of 11 years to repay for men and 16 years for women.

For those who started studying from 2012, most graduates are expected never to pay off their loans, male or female. But research has found that the difference in the treatment of men and women by the 2012 reforms is “substantial”.

The typical earnings profile of a woman – even when compared to a man in a similar job – means they tend to pay more and for a longer period of time, in particular through their middle working years. In other words, women are already paying more and the extra interest only adds to that.

Women also end up carrying longer term financial and career burdens because men are less likely to take paternity leave. The issue is then further intensified by the expenses associated with childcare, which often force women into part-time work.

A recent Twitter thread, which has received much attention, has made it very clear that there are different costs for men and women who study for the same degree. The difference between the couple in question is that woman took two periods of maternity leave and accrued interest at a rate which effectively cancelled out the payments she had been making – meaning it will take her significantly longer than her husband to pay off the debt.

The system is opaque and confusing. Many women – just like those responding on Twitter – have no idea they will accrue interest on existing loans during maternity leave. Many more will have been paying it and wondering why it is taking them so long to pay off the debt.

COVID-19 has disproportionately affected working mothers, especially entrepreneurs and the self-employed. And research shows that women have experienced high levels of reductions in hours, furlough and redundancies because of childcare issues.

Pre-pandemic, women university graduates took on a larger burden of student debt when they became mothers. This was on top of gender pay gap issues that often begin at the early career stage for women.

Working from home can also worsen gender inequalities because women still undertake most of the childcare work and experienced greater strains during this time, as schools and nurseries were forced to close and childminders were unable to work. To make matters worse, there may well have been further interest accruals on student loans for women who were forced into part-time work and earned less than the payment threshold.

Research carried out during the pandemic has also found that half of the 15% of mothers who were made redundant (or expected to be made redundant imminently) believed that a lack of childcare provision played a role.

These issues are not limited to the UK. Research from the US in 2019 found that student debt repayment is delaying women getting married – but not men.

In Scotland, there is a forthcoming government consultation on the issue, relating to student loans taken out for living costs. It will be interesting to see whether progressive steps will be taken to bring a degree of gender equality to student loans repayments. Unfortunately, there is currently no such action in England.


We are calling for a freeze on student loan interest accruals during maternity leave in the UK. This would be a small step to reducing systemic gender discrimination and the “pinch”, which refers to so-called Boomers (the post-war generation born between 1946 and 1964) pinching the future of their children.

As the country attempts to “build back better” post-lockdown and post-Brexit, this step would help to unshackle women graduates who choose to have children from extra and unfair burdens of debt at a time when people are increasingly choosing not to have children at all.

With the student exam results fiasco during the summer and bleak employment prospects for young people and graduates, some people already feel like their future has been stolen from them. Removing the motherhood penalty on student loan interest repayments would at least signal some hope.

2020-08-31
Previous Post: Anonymous group hack reveals hidden government data about COVID-19 cases in Nicaragua · Global Voices
Next Post: Back to school: how to support children as they head into a new class