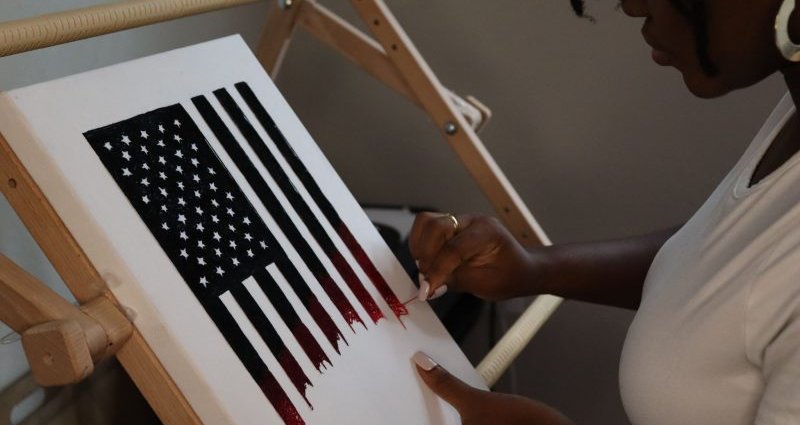 The cover of TIME magazine’s August 31-September 7 issue, titled “The New American Revolution,” boasts an embroidered image of the American flag, with a needle stuck into the thread of one unfinished end — a story that is still unfolding, especially for people of colour in the “land of the free.”

The cover art was designed by 23-year-old Trinidadian Nneka Jones. TIME’s art director, Victor Williams, was impressed by her photorealistic painting of George Floyd, which he spotted on Instagram, and invited her to create the cover for this special issue.

The project fits perfectly into Jones’ creative identity as an “activist-artist.” In this, the second part of my interview with Jones, we discuss that identity, as well as other difficult issues she has tackled as she strives to use her art as a bridge to understanding. 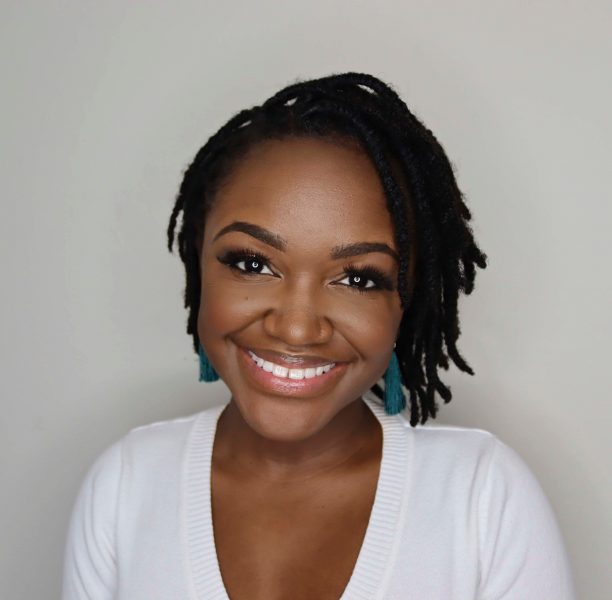 Janine Mendes-Franco (JMF): It’s so fitting that an image created by a “foreigner” is the symbol for TIME magazine’s exploration of America’s current reality: fierce nationalism in a country built by immigrants, unresolved issues around race, exploding gun violence, vast inequity. What did your reassembly of the US flag strive to accomplish?

Nneka Jones (NJ): This hand-embroidered flag was created with the intention of signifying optimism and hopes that we can all work together to build a brighter future. This nation has a great impact on many other countries around the world, and so it is important that we understand the importance of equality. Currently, Black people and people of color are calling for the opportunity to excel in higher level positions and with the push to elevate the Black entrepreneurs, visionaries and creatives like myself, it allows for inclusivity and can hopefully bring about a better America and better world.

JMF: How difficult was the ombré effect to achieve and what was the significance of blending the colours in that way?

NJ: Given that I was limited to 24-hours to complete this piece, it was definitely a challenge to ensure that the ombré effect was up to my standard of work. It was also important as this effect was particularly symbolic of a more hopeful future and the shift and transition to allowing black people and people of color a voice, a space, and a chance at achieving greatness.

JMF: You’ve been living outside of Trinidad for some time now, yet the visual language of T&T is strong — almost defiantly so — in your work. Tell me about the impact of those beginnings and that identity on your art. It’s like you’ve turned Granny’s familiar, comforting embroidery on its head and repurposed it for the frontlines of battle.

NJ: While living in Trinidad, I was always influenced by the flamboyant colors and vibrant culture that we have, and had always incorporated this in my work as it was a reflection of the Trinbagonian spirit. However, as I have grown into my artistic skin, I am able to use these same colors to draw attention, as well as communicate symbolic meaning in my pieces. The colors that I use now are very intentional especially as seen in my most recent series, ‘Targets Variegated,’ where I use the colors of a traffic light to tell a story of Black women and children reclaiming their rights. 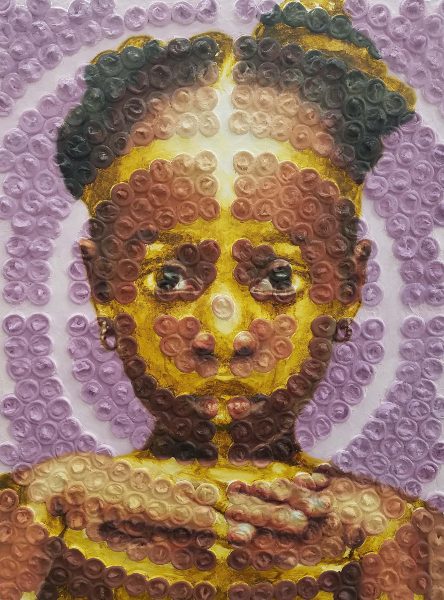 JMF: That ‘Target’ series is one of your most startling pieces of work. It’s aimed at raising awareness about sexual abuse and human trafficking. The use of condoms around the images of these girls and women is disturbingly provocative. Tell me about the ways in which you use your art to engage in discussion and effect change.

NJ: [The] series is a call to everyone to look closer and pay attention to what is currently happening in society. It highlights the statistics where [most] sex trafficking victims are young, beautiful, innocent girls of color. Hence, the series features hundreds of condoms on each canvas, layered in a ‘target’ pattern, drawing the viewer’s eyes to the eyes of the victim. It is a very striking image, one that forces you to realize the harsh reality and help speak out against it so that this ends, and other young girls and women are not targeted.

JMF: Do you have a particular piece that’s close to your heart?

NJ: Right now, I do not have a favorite piece; however, the piece that has been a huge milestone so far in my art career would be the TIME magazine cover. Not only did I get to produce hand embroidered artwork, but I was also able to create as an activist artist in under 24 hours and it is a piece that has changed my life.

JMF: Who has inspired you as an artist?

NJ: My high school art teachers and professors continue to be huge inspirations and influencers in my life. A lot of people make fun of art teachers or joke that most art majors don’t ever really become an ‘artist.’ However, my art teachers have brought me to where I am today; without their guidance and support, it would take me a much longer time to realize my potential and act on it, and I am truly grateful to have had them for my foundation. 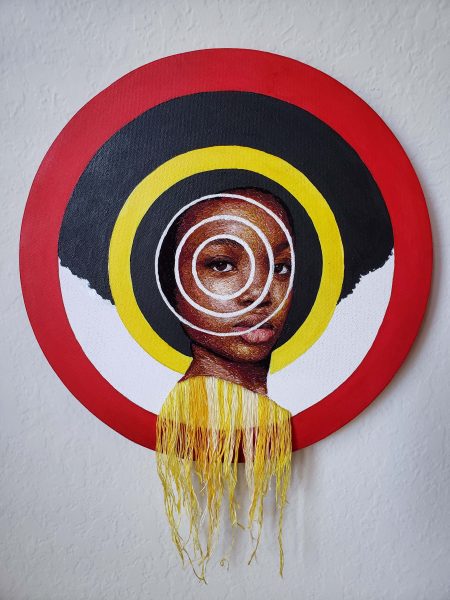 JMF: How has the internet and social media helped you?

NJ: In 2017, I decided to start my art blog on Instagram and named it @artyouhungry. People often found it difficult to pronounce my name and so I wanted something that was easy to pronounce, remember and fun! I did not know where this blog journey would lead, but I am so happy that I stuck to it as I am able to share the process of my work with hundreds of people, and also get feedback when needed. This has allowed me to make connections with other artists and even galleries, and I look forward to developing my brand on social media as I elevate in my art career.

JMF: You’re still so young and have your whole career ahead of you, with all its inherent dynamism and change — but right now, in this weighty moment, if your art could accomplish one thing, what would you want that to be?

NJ: I would hope that my art could cause someone to reflect within themselves — almost like a mirror to society — and truly ask how they are contributing to what is currently taking place, and what they can do better to improve the world we live in.