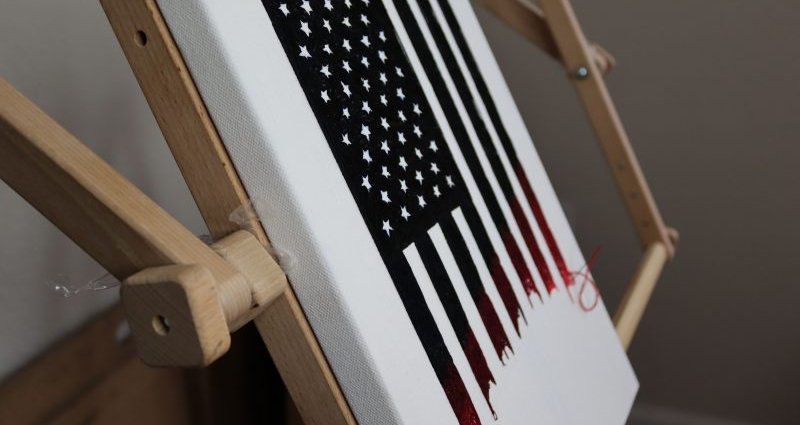 The covers of TIME magazine have often cut right to the quick of pressing issues through simple, powerful imagery that addresses both the big picture and the nuances of any given situation.

The cover for its August 31-September 7 issue, however, was especially emotive. Headlined “The New American Revolution,” a searing image of the United States flag integrates itself into the negative space, even as it holds that space to facilitate discussion about creating a future for Black Americans that will live up to the promises of fairness and equity laid out in the country’s Constitution.

The artist responsible for that image is 23-year-old Trinidadian Nneka Jones, whose stunning painting of George Floyd, which she shared on Instagram, captured the attention of TIME’s art director Victor Williams. The rest, as they say, is history:

Jones left Trinidad and Tobago for the US to get her Bachelor of Fine Arts degree; she graduated from the University of Tampa in May, the same month that Floyd was killed and the Black Lives Matter movement exploded not just in America, but around the world. It was a convergence of events that solidified her work as an “activist-artist.”

Jones chose to work in the embroidery medium on canvas. As Victor Williams explained:

Every time she pushes the needle through the canvas, it’s an act of intention that mirrors the marching, the protests, the push to form a more perfect union. It’s deliberate. It’s painstaking. It’s long. It’s hard. Each one of those stitches is a single person’s story, a single person’s travails. That’s why we wanted to make the stitches visible.

Even the process of making the art — Jones’ fingers were cut and sore from working so quickly on it — was an act of solidarity with those who bleed from daily injustices that come with being Black in America.

Via email, I connected with Jones and chatted with her about her art. In this, the first of a two-part interview, she shares her vision for how art and activism can change the world. 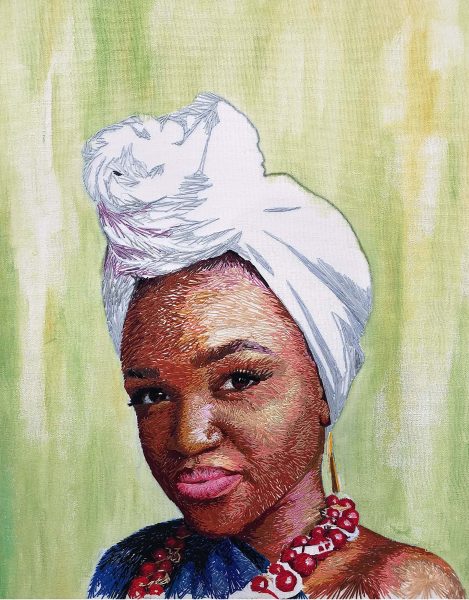 Janine Mendes-Franco (JMF): Congratulations on your TIME magazine cover. Embroidery on canvas is such a unique medium. How did you gravitate toward it?

Nneka Jones (NJ): Thank you! My discovery of embroidery came about through an experimental painting class at the University of Tampa. The class invited the students to create a painting without using paint as the main material on the canvas. It therefore forced my classmates and I to reflect on every day and non-traditional materials that could be used. Once I had decided that I would use thread, after seeing many other embroidery artists, I was able to complete my first hand embroidered self-portrait.

JMF: It’s clearly a precise and painstaking process. What went into that TIME cover, from concept to completion?

NJ: Victor Williams reached out to me […] He was automatically drawn to my hand-embroidered work and offered for me to produce cover art for the […] issue curated by Pharrell Williams. We had decided that using the American flag would be the perfect symbolism as it is a reflection of everything happening in the nation currently.

After having only 24 hours to complete the hand-embroidered work, I was able to stencil out the flag and have the agreed upon image completed by the deadline. The incomplete ‘finish’ contributed toward the meaning of the piece, as it is symbolic of the work in progress toward a more inclusive future.

JMF: Activism is deeply entwined in your art. What has the experience of coming from multi-ethnic Trinidad and Tobago to a racially divided US been like, and what perspective has your art brought to the issues that need to be addressed?

NJ: Racism is something that exists on a global scale and every country has issues relating to some social injustices. These issues were not foreign to me before leaving Trinidad but of course, coming to a nation that is more largely populated and even more of a melting pot, they seemed to be more obvious.

As an activist-artist, I use my artwork as a tool to bring awareness to these injustices and evoke change within society. It is harder for us as humans to have these conversations without having a prompt or ‘push.’ The artwork then, is almost like a stepping stone, forcing viewers to look within themselves — but also amongst themselves — and have these conversations. 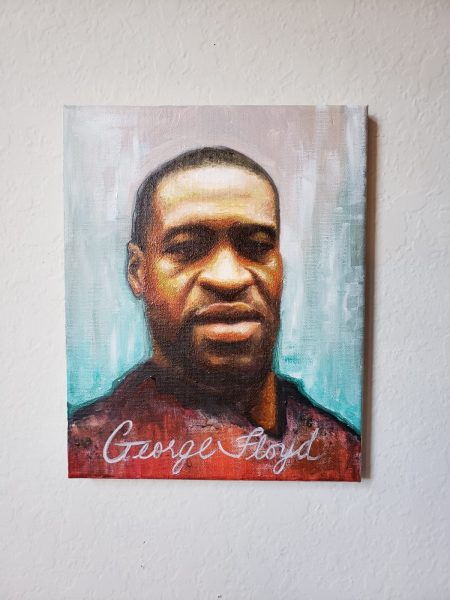 JMF: Your portrait of George Floyd was tender and commanding at the same time. How did you feel working on that piece, what message did you want to send, and why was its photorealism important to you?

NJ: The painting of George Floyd was all very in the moment. It contradicted all my other pieces as I usually take time to plan out the content and composition of my pieces and also spend a while completing it. However, this painting was different; I wanted to capture the essence of Floyd right then and there and bring some kind of peace to the chaos that was happening in America at that time. This meant that I had to do my best to capture him as his daughter, family and friends saw him before his passing.

JMF: When the BLM protests spread worldwide many Caribbean social media users were criticised for jumping on the US bandwagon — but the reality is that every society has its own brand of racism to deal with. What role does your art play in these movements and resulting conversations?

NJ: Not many of us realize that although we come from different backgrounds, ethnicities, countries and social groups, a lot of the issues that we face are very similar and are related to overarching issues of racism, inequality and discrimination.

This is something that we can all relate to in some way and if my work is to be seen on a global scale, people would be able to identify the specific issue I am highlighting without even speaking the same language I speak. Art in itself offers a universal language and that allows me to create work that speaks out against the injustices and calls for change in all parts of the world, not just Trinidad and not just America.

In Part II of this interview, Nneka discusses the optimism inherent in her work and how social media has helped propel awareness of her art.