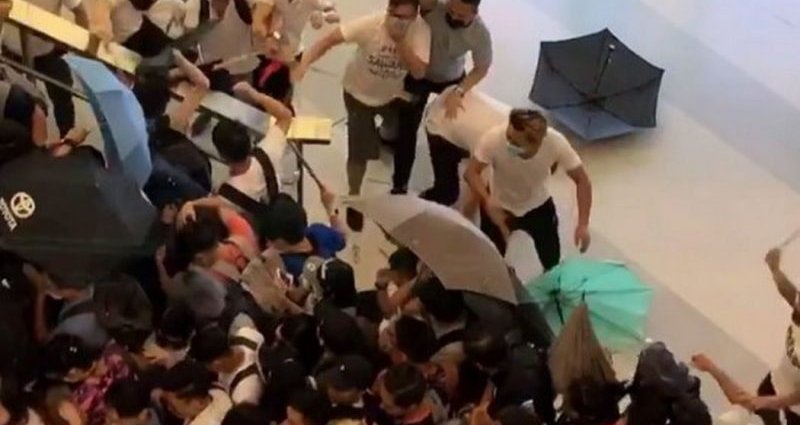 Victims of mob attacks turned into rioters by the police

Mobs stormed the Yuen Long Subway station on 21 of July 2019. Screen capture from a viral video on Twitter

A Hong Kong lawmaker, Lam Cheuk-ting was arrested on August 26, along with 12 other individuals, in a case related to a mob incident that took place on July 21 2019 in a suburban subway station of the city.

Police senior superintendent Chan Tin-chu told the reporters in a press briefing on August 26 that the incident was considered to be a “confrontation between evenly matched rivals” of white-clad and black-protesters. This interpretation contradicts a widely shared view that the incident was in fact an attack of subway passengers and people wearing mostly black, the color associated to anti-government protests, by a group of people dressed in white who align themselves with the official views of the government.

The July 2019 Yuen Long mob attack incident is one of the most significant events that rocked the territory as part of the 2019 anti-China extradition protests. The absence of the police during the attacks undermined the credibility of the police authorities, and eventually radicalized the protesters who came to believe that the police were in collusion with the white-clad mob.

While numerous videos and live-stream reports from the attack scene show that over a hundred people wearing white and armed with weapons were attacking indiscriminately both subway passengers and protesters who were returned from a massive protest in Hong Kong Island, the senior superintendent accused such reports of being one-sided and misleading.

Role of the Hong Kong police in the mob attack

Yet, a timeline reconstructed by public broadcaster Radio Television Hong Kong (RTHK) has shown that Yuen Long police had kept a blind eye to the planned attack:

Citing footage from surveillance cameras as well as witness accounts from a Yuen Long district councilor and various victims of the attack, the RTHK’s report indicated that the police were informed of the attack plan before July 21. Even though over a hundred white-clad men had started gathering outside the Yuen Long subway station as early as at 6:00pm and attacked a restaurant chef at around 9:45pm, the Yuen Long police had not taken any action to disperse the mob.

Only by 11:20pm, 40 riot police arrived at the station, yet by then the white mob had left. At 00:27am, as the police vacated the station, the white mob stormed into the station again and beat up civilians randomly with metal rods. The white-clad men later retreated into a nearby village, but again, the police did not take any action to arrest people.

However, Chan insisted that the police had taken prompt action within 18 minutes upon receiving emergency calls. His claim is in contradiction with previous police reports which clearly stated it took 39 minutes for the police unit to respond to the calls.

Chan also dismissed the allegation over the collusion between the triads and the police concerning the attack:

#HK police now say a riot officer “pushed” a white-shirted man, instead of “patting him on the shoulder”, in Yuen Long in the small hours after the July 21 mob attack. Well, let the image speaks for itself. (Background voice from then Assistant District Commander Yau Nai-keung) pic.twitter.com/5DUkeWuujf

The police version of the story denies the responsibility of the authorities in the attack incident, and is now used as a weapon to prosecute political dissent, as pointed out by Ray Chan, another pro-democracy lawmaker:

[email protected] has now blatantly become the Ministry of Truth in propagating lies to achieve the political aims to smear commuters & legislators involved in #YuenLongDarkNight and to protect their infamous reputation, the #YuenLong mafia & rod-wielding mobs. #HongKongProtests https://t.co/dTQmC15hsy

Polie official Chan also accused Lam Cheuk Ting of inciting the conflict in the press briefing. However, he did not explain how.

According to Lam’s video record taken on July 21, when he arrived at Yuen Long subway station at around 10:45pm, a woman had already been injured by white-clad men inside the station. He then walked towards the gates and warned the mob that the police would soon arrive. After that, the white mob  jumped over the gates and stormed into the platform areas.

Another witness captured that moment: Gwyneth Ho, journalist of the Stand News, was filming and broadcasting live when the white-clad men stormed into the subway gated area. She was then beaten by a man in a pink outfit. Instead of condemning the attacker, the police questioned Ho’s presence, accusing her “one-sided” live-broadcasting of escalating the conflicts, and suggesting that “doing a live broadcast is no exemption from criminal offences”:

See for yourself footage by then @StandNewsHK reporter @KwaiLamHo, who was beaten & injured.

At around 11:10pm, 10 minutes before the police arrived at the Yuen Long station, Lam Cheuk Ting was himself beaten and injured as the mob charged into the subway platforms. Even though he is a victim of the attack, he is now being painted as a rioter by the police. Lo Kin-hei, the Vice-Chairman of the Democratic Party highlighted the absurdity of Lam’s arrest:

Now the police arrest him for taking part in a riot. pic.twitter.com/S7APQ0rnJ7

The pro-democracy sector had hosted a joint press conference condemning the police for rewriting the history of the mob attack incident.

Wu Chi-wai, chair of the @HKDemocrats, has accused police of “rewriting history” of the 7.21 Yuen Long attack.

He said this incident showed that the HK govt & police are “helpless”. He also calls on HK people to wear black clothes tomorrow as a sign of protest. pic.twitter.com/VKgbiEeSXN

In a state where the authorities are so obsessed to control the “truth”, people’s memory will become the most important place to  seek justice, as pointed out by human right lawyer Sharon Hom:

#Justice will not be extinguished forever in #HK. Our responsibility is to remember, preserve evidence and stand as [email protected] @lokinhei @hrichina @samuelmchu @annakcheung @antd @benedictrogers https://t.co/97uAmTXq9T