After 19 years, Boca is still telling stories from the street

Marcos Scher selling the paper at traffic lights before the pandemic. Photo: Charlotte Dafol/Used with permission

Nineteen years ago in Porto Alegre, in southern Brazil, a newspaper made entirely by people living on the streets was created. Boca de Rua (Mouth of the Street, also known as Boca) newspaper was ideated by a group of journalists who wanted to provide this community with the tools to speak for themselves.

The project was conceived in 2000 and a year later, during the first meeting of the World Social Forum, the first edition of Boca was launched. Today, the newspaper is the only member of the International Network of Street Papers (INSP) created entirely by people living on the streets.

The ideas for stories, interviewees and questions are all developed by the community itself. Two journalists, who have been with the project since the beginning, are responsible for designing every new issue. A group of volunteers also helps with support such as recording meetings, guiding the reporters about notetaking, and transcribing notes on the computer.

Published as a quarterly, Boca’s coverage ranges from reports of abuses suffered by those on the street to positive stories. Over a period of three months, the group decides on the direction of the coverage, they go out into the field, conduct interviews, take photographs and gather testimonies for the stories. Member turnover is high, but on average, about 50 people work on each edition.

After printing, each member of the group receives a share of copies to sell on the streets of Porto Alegre and all the proceeds go to the journalist/vendors. The publication is also sustained by donations from supporters, many of them anonymous.

Rosina Duarte, one of the creators of Boca de Rua and the NGO ALICE (Free Agency for Information, Citizenship and Education), to which the newspaper is linked, said that the initial aim was “to give a voice to those who don’t have one”. In time, however, they realized that this was presumptuous — the voices were always there, society just didn’t listen to them, she says.

In a telephone interview with Global Voices, Rosina says:

When we arrived, we still had those pretty words which hold a lot of undertones of “nice prejudice”, as I call it, which is wanting to give something to them to help. But we realized that it was us who had to become literate in the language of the street. They didn’t have literacy in written language, but we were completely illiterate about life on the street. 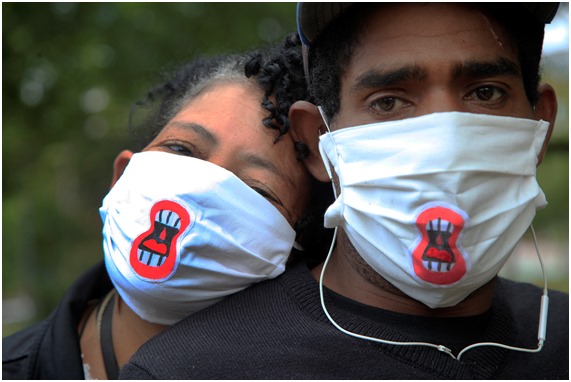 The journalists’ original idea was to create a radio broadcast program using speakers installed on the city’s lamp posts. But when they contacted a group of homeless people, they were adamant: “We want a newspaper about us”. Rosina says the idea worried her at first, but it worked:

When they said they wanted a newspaper, we went after funding, still feeling our way in the dark, not knowing what to do. But one day the penny dropped: by telling what was happening on the streets, they were breaking news. And if they became aware of this, the paper would organize itself very clearly. Because we make news all the time. Some people do it in a more objective way, others less objective, but we do it.

Over time, the newspaper also became a kind of social movement. The group meets weekly to discuss collective demands and possibilities for supporting the individual issues of its members. It is also linked to initiatives in the field, such as the Movimento Nacional da População de Rua (National Movement of People on the Street) and Amada Massa (Loving Dough), a bakery that aims to generate autonomy for people with a history on the streets in Porto Alegre.

Regarding the content of the stories told by the paper, Rosina recalls:

Voices from the streets

In a telephone interview with Global Voices, Elisângela Escalante, who joined the group six years ago when she was on the streets, emphasized the importance of the newspaper in her life:

A lot happened to me through the paper. It got me off the street. Because I lived on the street for three and a half years and I got out after a few months going to the paper. I was saving some money and started to rent my own space. Before I didn’t earn my money, I depended on my partner for everything. It makes a difference for me, I like to have my own money. 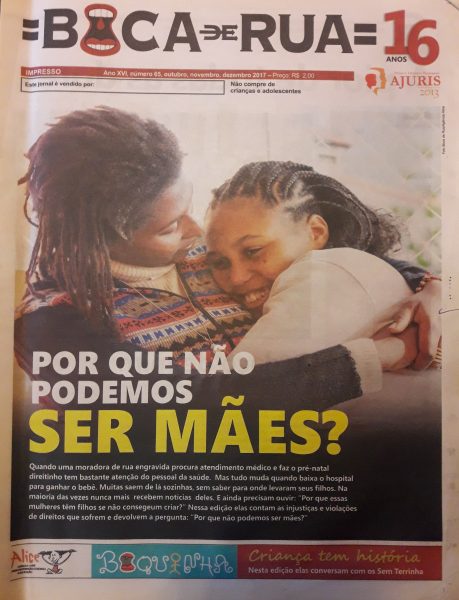 The cover of the edition which drew attention to the challenges of motherhood on the street. Photo: Agência ALICE/Boca de Rua, used with permission.

Elisângela remembers one edition in particular, where the cover story asked: “Why can’t we be mothers?”. The report talked about the challenges that women with street backgrounds face in motherhood.

While producing the report, some women members of the newspaper managed to regain contact with their children who they hadn’t seen in years, Elisângela says:

I think what we say [in the paper] is the truth. It’s what we feel and what we experience within society. If it weren’t for Boca, I wouldn’t have any other way to do this and be heard by so many people. Through it I got a lot of things and I helped a lot of people too.

For the first time in its history, the newspaper is unable to be sold on the streets due to the COVID-19 pandemic. In an effort to alleviate the effects on the reporters’ income, Boca de Rua has been transformed into a digital version.

With a contribution of 20 BRL (around 3.75 US dollars) every three months, readers access the latest edition of Boca, as well as old editions and other material.

For the contributors and reporters, the most important thing is that the voices from the street continue to be heard during the pandemic. When asked in a telephone conversation about his feelings about the newspaper, Marcos Sher, a 13-year veteran of Boca, said:

For me it’s good, very good. So you can see I’m not letting go, right? Sometimes I stop for a while, but I come back again. For me, the newspaper was a way to get out of [drug] trafficking and go back to work. It’s good because it’s something to do, to get me out of the house. Having something to do is very important for me.

Editor’s note: Talita Fernandes works with the newspaper Boca de Rua (Porto Alegre, Rio Grande do Sul) and wrote a dissertation “Street, feminine noun: women in movement and the right to the body in the city”, by the Federal University of Rio Grande do Sul (UFRGS).

2020-08-26
Previous Post: Back to school does not necessarily mean back to work for mothers
Next Post: We lose about 30 minutes of sleep each night of the working week, new study shows