Channel 4 in Leeds: a new hub to unlock creativity in the UK’s nations and regions 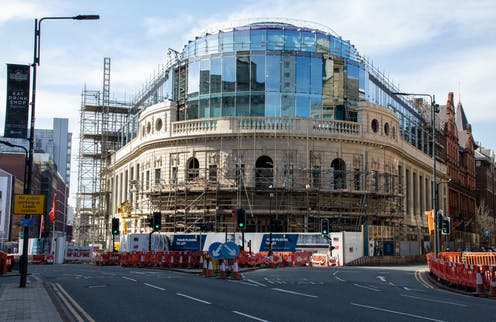 A large banner appeared on the Majestic building in Leeds in October 2019. Adorning the outside of Channel 4’s new national HQ, it read: “Didn’t think Channel 4 knew there was life outside the M25” above a strap announcing the broadcaster’s arrival in 2020.

Channel 4 has since released the first photos of the inside of the building. The broadcaster is to occupy 27,000sq ft of the seven-storey former cinema and set up a digital creative unit and studio that will be used to co-host Channel 4 News.

Despite the inevitable delays and complications associated with the COVID-19 pandemic, Channel 4’s managing director for nations and regions, Sinead Rocks, remains upbeat about the broadcaster’s move to the city. “Our commitment to moving into the Majestic, and our commitment to still have 300 jobs outside of London and the 50% outside-of-London spend by 2023 all remains in place”, she told me. “We’ve had to make savings within our business as a whole, but we are still prioritising our nations and regions commitments within that.”

The targets that she describes are set out in the 4 All the UK strategy, which initiated the largest structural shake-up in the broadcaster’s history just over two years ago. The bidding process which followed involved most major cities in the UK’s nations and regions competing to host Channel 4’s new national HQ before a shortlist narrowed the options to just three: Birmingham, Manchester and Leeds. Despite being labelled the underdog by many commentators, Leeds was selected, with additional “creative hubs” to be established in Bristol and Glasgow.

The back story to Channel 4’s arrival in Leeds is, however, rather longer and more complicated than this summary suggests. For over two years, the broadcaster was at loggerheads with the Department for Digital, Culture, Media and Sport (DCMS) about its future. Gradually the threat of privatisation which had hung over Channel 4 gave way to a strategy of devolution under the aegis of the government’s “Northern Powerhouse” initiative.

David Shepherd, director of trade and investment at the Leeds City Region Enterprise Partnership (LEP) said his organisation was extremely proactive in terms of picking up signals for potential inward investment. “It’s what we do”, he explained. “That level of proactivity from us allowed us to understand Channel 4, so that when the 4 All the UK process began, we were almost starting from a stronger position, because … we understood their pressures, we had engaged with them through open dialogue.”

As the bidding process unfolded, the LEP drew in support from a host of regional partners including the City of Bradford Metropolitan District Council, Leeds City Council and Screen Yorkshire to shape the winning bid.

As Sally Joynson, chief executive of Screen Yorkshire argues, the Leeds bid also redressed the mounting east-west imbalance with the UK screen industries. “From the Scottish borders down through the north-east, Yorkshire, east Midlands, you know, it had been in decline … If you continue to push all of this into the north-west, then where does that leave the other half of the country?” she explains. “You have a population of nearly six million people in Yorkshire, with a really strong brand … and a really strong legacy of production. You need to open opportunities for people on this side of the UK.”

In practice, the geographical and cultural selling points of Leeds and the wider region proved to be decisive factors. “We used data to show that with the pull of Birmingham, actually, you’re pulling on the same population and people and talent as London, there’s some overlap. And we showed that the pull of Manchester is, actually, quite focused on the north-west – whereas in Leeds there’s a much broader geographic pull for talent” explains Eve Roodhouse, chief officer for economic development at Leeds City Council.

“Channel 4’s got a very keen focus on diversity, and so obviously we underlined the diversity of the population, both in Leeds, but if you add Bradford into the mix, and the broader region, then you can access a really diverse talent pool.”

Comparisons will inevitably be drawn with the relocation of several BBC departments to Salford’s MediaCity almost a decade ago, a development which has attracted criticism for its “negligible” impact upon business development and job creation in the Greater Manchester region.

As Rocks makes clear, however, the approach of the two broadcasters is fundamentally different. “We have fewer than 1,000 employees in total. Us creating 200 roles in Leeds is not going to significantly change the employment landscape of the region. What it can do, and what it has done, is be that catalyst for broader growth”, she explains. “From the moment that Channel 4 announced its decision, some of the larger independent production companies opened offices in the area, studio facilities were planned and are now being delivered, post-production companies started looked at taking premises.”

Indeed, major infrastructure projects include the launch of Leeds Studios and the redevelopment of the Engine House as a post-production hub. When training, skills and R&D initiatives such as Beyond Brontës, Screen Industries Growth Network (SIGN) and XR Stories are added to the mix it becomes clear that the entire region is pulling in the same direction.

Channel 4’s arrival in Leeds undoubtedly marks a significant step in turning the tide of London-centrism within the UK screen industries. Finally, the stage is set for long-term success to spread northwards – and not before time.

Nathan Townsend was a Research Fellow on XR Stories until July 2020, and now works as Lecturer in Creative Industries at the Department of Theatre, Film, Television and Interactive Media at the University of York