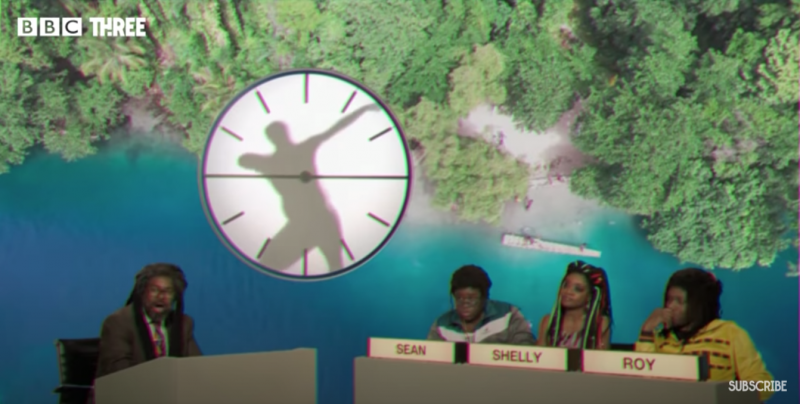 “Who decided this was funny?”

Screenshot of a scene from an episode of BBC3’s “Famalam” series, titled “Jamaican Countdown”, taken from BBC3’s YouTube channel promoting the show.

A skit on BBC3’s Famalam series, which describes itself as a “super sharp sketch show starring black British talent”, has sparked widespread criticism from Jamaicans in the diaspora and at home — including expressions of disgust from Jamaican government ministers.

The sketch, headlined “Jamaican Countdown”, calls itself “a Caribbean take on the classic gameshow about spelling”. Three characters, two men (one a ganja-smoking Rastafarian) and a woman, are trying to guess a word as another woman places vowels and consonants on the board. An over-sized clock on the wall depicts the shadow of man standing with legs apart; early in the sketch he assumes a stance reminiscent of Usain Bolt’s famous lighting bolt pose:

Agree. Who decided this was funny? Absolute disrespect and disgrace https://t.co/tSWymY0apx

This short clip is full of negative, harmful, and oppressive stereotypes and tropes regarding black men, and specifically, those of Jamaican heritage. It depicts clear race-based sexual stereotyping with its depiction of a black man’s oversized genitalia. One of the show’s actors, Tom Moutchi, has claimed it is ‘banter’, and has not as of yet offered an apology – he claims that he and his friends joke about this stuff all the time.

The thing is, though – this is not a trope that has originated within the black community. This trope stems from the hypersexualisation and fetishization of black men, a concept which can be seen in existence just after the abolition of slavery, in which black men were perceived by white society to be hypersexual, lusting after white women, deeply promiscuous with no self-control. The fact that this programme was co-written by white men may offer even more reason as to why this is damaging and not ‘comedy’ […]

This is actually a very harmful piece of work, and its release seems to have completely ignored the current state of the world in which people are tirelessly campaigning for racial equality. Read the room, BBC.

As a Jamaican this is very offensive, […] belittling and seeks to mimic something that’s not reflective of my country [….] I am in total agreement with the Minister of Foreign Affairs to bring an injunction on [the] BBC to desist from further airing this asinine show. Its full time people stop thrusting their disgusting vulgarity on Jamaica. Jamaica is a brand and this does not reflect my country’s culture.

Others disagreed, claiming it was just a joke. One viewer commented:

So far the overly sensitive people looking to be offended at anything crowd are just edging out those who appreciated it for what it is.

Tom Moutchi, an actor on the show, defended the skit on Twitter:

It’s only funny when it’s not you that’s the butt of the Joke. The cast consist of Africans and Caribbean’s. We’re not trying to single out or outrage anyone – we are just poking fun on our truths and stereotypes.

This looks like a 70s comedy sketch , which at the time was regarded as acceptable and now racist. Here we are in 2020, because it’s black actors it is ‘banter’. That’s the same defence, used against BAME people everyday. Ditch these outdated tropes and let’s have ‘new comedy’.

“BAME” is an abbreviation for Black, Asian, and minority ethnic, used in the United Kingdom to refer to people who are not white.

The show’s producer, Akemnji Ndifornyen, described an earlier black British comedy as “part of his DNA” growing up in the UK, which inspired him to produce “Famalam”. The term is British slang for family and close friends.

The heated discussion over this sketch shines a spotlight on the complexities of racial identity, cultural awareness and the wider black diaspora. It also raises the question of what black comedy should look like in 2020 and beyond, after Black Lives Matter has shown how such harmful stereotypes and microaggressions contribute to misinformation and systemic racism.

The episode is scheduled to be broadcast on the evening of August 23 in the UK.

2020-08-23
Previous Post: From horticulture to Harry Potter cosplay, Thai students are finding creative ways to protest against repression · Global Voices
Next Post: Why Donald Trump still appeals to so many evangelicals