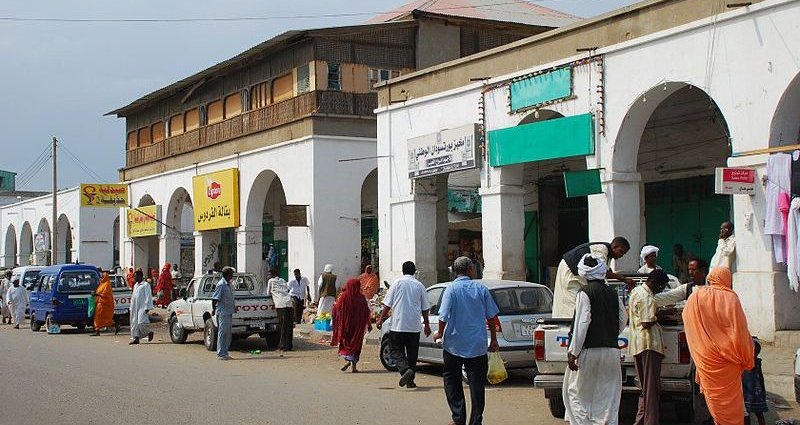 A shopping area in Port Sudan, eastern Sudan, November 2008. Photo by Bertramz via Wikimedia CC BY 3.0.

Last year, the Sudanese people held a revolution under the slogan of “freedom, peace and justice.” But until now, no peace agreement has been signed and blood continues to spill — most recently in Port Sudan, a port city in eastern Sudan.

Port Sudan is home to the Nuba people of Sudan, and the Beni Amir, a group of people whose origins span western Eritrea and eastern Sudan. To some, the Beni Amir people are considered “foreigners” from Eritrea, who were granted citizenship in Sudan under the former Omar al-Bashir government.

The violence allegedly emerged out of tensions from previous homicides among the two groups, who have been clashing since at least 2019. A Nuba-Beni-Amir peace agreement was signed by tribal leaders in March but has not held.

The Ministry of the Interior released a statement about the four-day period of violence that left at least 98 people injured and 32 dead. At least 72 suspects were arrested and criminal cases were opened against them.

The Central Committee of Sudanese Doctors (CCSD), described the clashes as having a “tribal character.” In another statement, the committee offered more details on the violence in an attempt to “prevent the spread of rumors”:

[Tweet 1]: On its third day, the unfortunate bloody events continue in the city of Port Sudan, in which many innocent lives, sons and daughters of the state, have been lost. It hurts us to announce the numbers of victims, but it is our professional duty to do. [Tweet 2]: So, in order to prevent the spread of rumors that benefit the owners of the political agenda alone. The total number of injuries reached (87) cases of varying severity. The number of deaths has reached (25) since the outbreak of the events until the moment. We hold the Security Committee and the state government fully responsible for protecting the citizens and the security stability [Tweet 3]: and we denounce the position of the federal government, which stands by watching what is happening in the state without moving. May God protect the state and the citizens from the evil of seditions. Urgent recovery for the sick, mercy and forgiveness for the deceased.

Prime Minister Abdallah Hamdok tweeted about his pledge to uphold human rights in Sudan, with apparent disregard for the clashes:

I was pleased to speak today in a virtual meeting with human rights and civil society organisations from around the world, who remain strong allies of the Sudanese people in the path to change and democratisation. pic.twitter.com/fwj6MbYnX7

Citizens directed their discontent by insulting the federal government for its blatant inaction.

Did you know, sir, at the same time that you were speaking foreign organizations, there was a Sudanese city called Port Sudan whose blood flowed due to tribal sedition? I think it’s better to devote the time that you spent on a video conference to spend it realistically searching, investigating, and trying to stop the bleeding. ?? You waste time we badly need.

Mr. Prime Minister Dr. Hamdok, Peace be upon you. Did you know that we have cities bleeding in the East and the West, and there is no security or state prestige? Please stabilize the country.

A day later, Hamdak responded with a letter explaining that he had met with tribal leaders and politicians and decided to: Send a team from the Central Reserve Forces (CRF) to Port Sudan; create a quad committee from the council of security and defense to investigate; request that Forces of Freedom and Change (FFC) participate in making a proposal to solve the conflict, and support the strict curfew implemented by the Red Sea State governor to help quell the violence.

A press release regarding the situation in eastern Sudan.

Some say these clashes stem from chronic conflict between the Nuba and Beni Amir people that flares from time to time. Recently, netizens have raised the question of “hidden hands” playing with Sudanese security.

Eritreans rely on eastern Sudan as a source of goods, usually through smuggling and, therefore, have a stake in the region’s peace and security. Meanwhile, the United Arab Emirates has had its eye on Sudan’s main port, Port Sudan. Analyst Ahmed Shekay, a Sudanese activist from eastern Sudan, speculates that Emiratis may be trying to extort the government through these conflicts — but there is currently no evidence of this.

Hanadi Siddig, a Sudanese journalist, writes that the recent conflict has less to do with tribal or ethnic identities and more to do with foreign interference and their political agendas.

The authorities have not yet acknowledged the reality of the ferocious conflict between the components of the eastern community, which clearly shows the hands of the intelligence services of foreign countries, while it is clear to some that it is a tribal conflict — that reeks of racism.

Under the Bashir regime, “most of the foreigners [who live in eastern Sudan] were granted Sudanese nationalities and passports by the former Ministry Interior of the ousted government.” When the transitional government took power, Hamdok’s government did not “pay any attention” to this matter, writes Siddiq.

She continues, “Hamdok’s government is required to [take] quick [actions] to this crisis, educate citizens about what is going on, and calm them as much as possible until the crisis is over … before our beloved east turns into another Darfur.”

A march calling for accountability

The Sudanese Professionals Association (SPA) organized a march on Monday, August 17, calling for an urgent evaluation of the government.

According to the SPA’s statement on Twitter, protesters arrived in front of the prime minister’s office in Khartoum and requested a meeting with Hamdok, but his office sent a representative instead, whom the protesters refused to meet.

Soon after, police used tear gas to scatter the gathering. Several protesters were arrested and detained. Some witnesses said protesters burned tires in front of Hamdok’s office. Several protesters suffered injuries related to fractures, wounds and suffocation, according to a CCSD field report.

The new governor of Khartoum, Ayim Nimir, went to the police station a day after the march and demanded the release of detained protesters. He also published an apology.

It is clear to many Sudanese people that Hamdok’s popularity is dwindling daily due to Sudan’s fragile security and economic situation. Without guaranteed security, Sudan’s economy will continue to careen toward disaster and foreign investors may flee.

2020-08-19
Previous Post: Belarus in turmoil: the view from neighbouring Lithuania  · Global Voices
Next Post: What moments of uncertainty mean for war – and peace – between global rivals