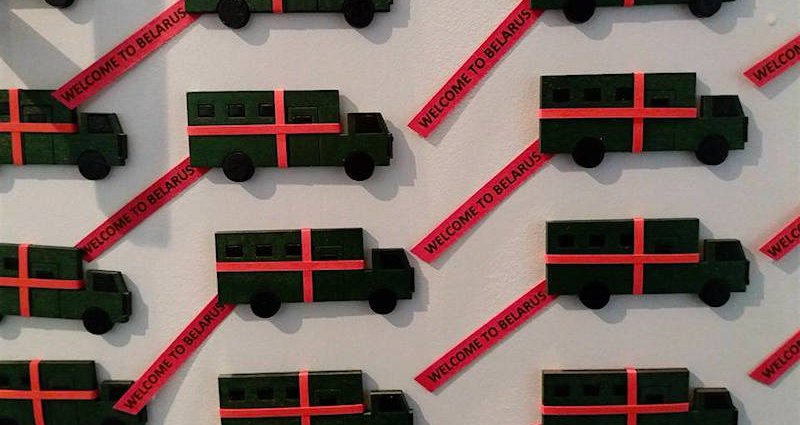 Over 7,000 people have been detained in mass protests since August 9

Police vans, a souvenir from Belarus on sale at the Ў Gallery of Contemporary Art in Minsk, Belarus, 2017. Photo (c): Maxim Edwards, used with permission.

When the official results of Belarus’ presidential elections were announced on August 10, the country erupted in protest. Alexander Lukashenka, who has ruled the country since 1994, had ostensibly been re-elected for a sixth consecutive term with over 80 percent of the vote. His challenger Sviatlana Tsikhanouskaya received just ten percent. Belarusians took to the streets to demonstrate against brazen electoral fraud. Tsikhanouskaya has since fled to neighbouring Lithuania and riot police have fired rubber bullets and tear gas into the growing crowds. But the crowds keep on coming.

During this turmoil, images circulated of riot police seemingly indiscriminately seizing Belarusians from the streets and bundling them into police vans. According to the country’s Ministry of the Interior, approximately 7,000 people have been detained at protest rallies, but some estimates put that number as high as 9,000. What is known is that the country’s police detention centres are now overflowing; detainees are held in the courtyards outside:

Detentions in the Oktyabrsky police department

But an anonymous group of “concerned IT specialists” from Belarus has just launched a new tool to keep track of the arrests — an interactive database of people arrested during opposition protests.

Launched on August 18, it includes their names, dates of birth, and presumed location. The database uses information from the Belarusian General Prosecutor’s Office, as well as updates from news websites such as Tut.By and Belsat, as well as a number of popular channels on the Telegram messaging service.

At the time of writing, the majority of detainees are located either at the Akrestina prison in the capital Minsk or the Zhodzino detention centre, to the city’s North-West. The website’s managers hope to update its content every evening at ten o’clock.

Given the political situation in Belarus, the creators of the database have taken pains to conceal their identities. It is hosted on a Google .app domain for Google Cloud users, which allows them more anonymity, circumventing the need to register a separate domain name. Whoever they are, their sympathies are clear; the website also features contact details of lawyers and human rights defenders such as ProBono.By, which now offers its services to locate missing detainees.

The new database even gives Belarusians some advice about how to document their incarceration if they are arrested:

If you are injured while being detained, arrested, or in custody:

1. Record by yourself (take a video of your wounds, record any nearby witnesses, indicate the time and date on a nearby clock, or on a newspaper.
2. Keep hold of the clothes you were wearing. Do not wash them or throw them away. Dry them and fold them away in a bag.
3. Write down on paper or recall on video what you remember from those days, in as much detail as possible. Say where you were detained, who was there, what they did, and what acts of violence were committed.
4. Seek assistance from the nearest medical institution (a clinic or any paid medical centre) and ask them to record all your bodily injuries in as much detail as possible.

This advice is useful in light of credible evidence of violence against protesters who are held in Belarus’ detention centres.

There are now multiple accounts by Belarusian citizens of ill-treatment, corroborated by several international journalists who were also detained by police in Belarus and wrote about their ordeal after their release. Some of these, such as that of Russian journalist Maxim Solopov who works for the independent website Meduza, have caused outrage well beyond Belarus. Nikita Telizhenko, a journalist for the independent Russian online publication Znak, described seeing a room in a detention centre where prisoners “lay on the floor like a living carpet, in pools of their own blood.” Furthermore, the Ukraine-based American freelance journalist Dan Peleschuk, who spent two days detained in Minsk, reported that he had witnessed several prisoners viciously beaten.

Disturbingly, when waiting outside detention centres for their relatives and friends to be released, some Belarusians have claimed to hear screams from inside the building.

Belarusian state television even circulated a video of several detained protesters who had been coerced, probably violently, into denouncing revolution:

Belarusian state television is showing this video of severely beaten young protesters. Asked if they’ll continue “the revolution” by an interrogator whose voice is altered they all say no. Seems to me that images like this will only anger people further pic.twitter.com/M8y6gjqm2v

Although detained protesters are gradually being released, there are still scattered reports of disappearances across Belarus.

The news website Tut.By has launched an online service which allows readers to submit information about people who went missing after the presidential elections. The website, citing the Belarusian Ministry of Internal Affairs, reported that over 50 people are unaccounted for as of August 18.

It is probable that some of these people surface in the country’s detention centres. This database could play an important role in getting them home.

2020-08-19
Previous Post: A-level results: why algorithms get things so wrong – and what we can do to fix them
Next Post: Learning from exam results crisis: the way students’ work is assessed needs to change