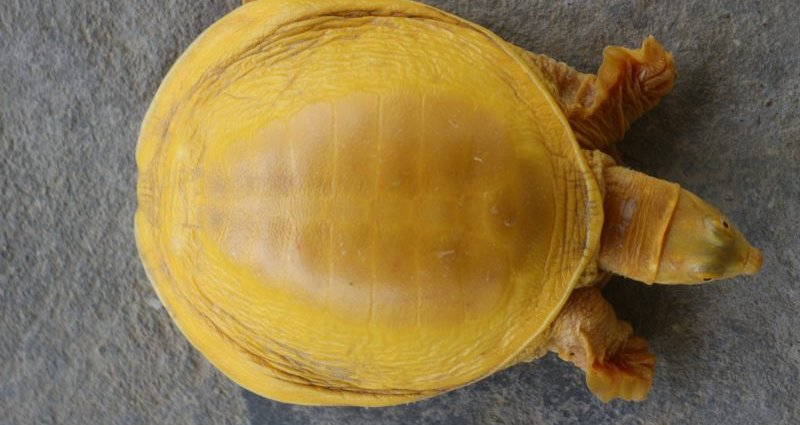 Lack of pigmentation makes the turtle appear golden in colour

After news of the existence of a yellow turtle in India’s eastern state of Odisha went viral this past July, Nepalis wanted to remind the world that they made a similar discovery first — on April 14, 2018, to be exact — when a rare, golden turtle was found for the first time in south-eastern Nepal’s Dhanushadham municipality.

According to a research paper by Kamal Devkota, Dev Narayan Mandal and Hinrich Kaiser, which was published in the journal Herpetology Notes, the turtle was released into its natural habitat after pictures were taken as proof.

In an email interview with Global Voices, Devkota explained:

Our team member, Chandradeep Sada, rescued this rare golden turtle from Dhanushadham Municipality, Nepal on April 14, 2018. Later, Dev Narayan Mandal identified it as an Indian flap shell turtle [scientific name Lissemys punctata]. We further researched it and found that the colour aberrations are quite rare in nature. The lack of body pigmentation made the turtle appear golden coloured, with only the eyes showing a dark pigmentation.

This is the first chromatic leucism in L. punctata in Nepal, which is the first for the northern subspecies of L. punctata and the fifth documented observation in the species. That’s why it is very important for conservationists and researchers. 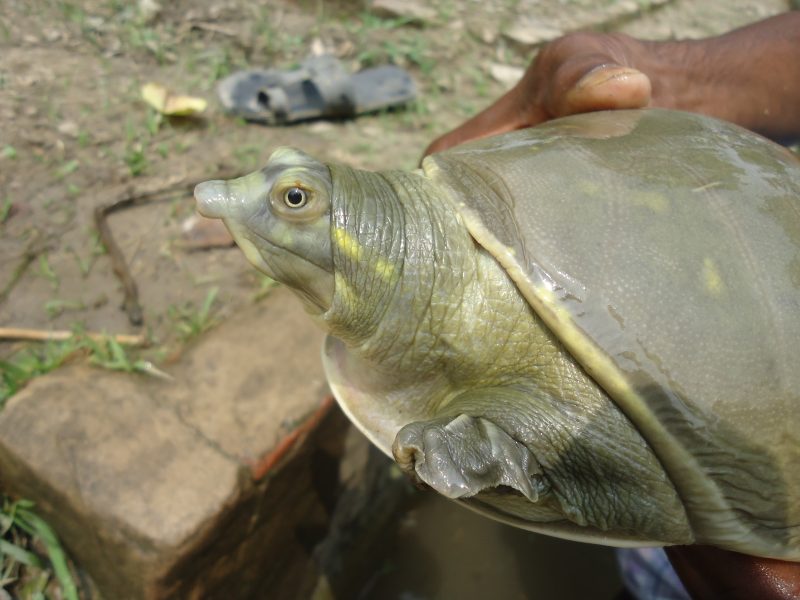 A normal Indian flap shell turtle is greenish-grey in colour, with yellow marks on its head and neck. It has a grey carapace dotted with dark yellow spots and derives its name from the femoral flaps at the plastron, the ventral part of the shell.

These turtles are found in Bangladesh, India, Myanmar, Nepal, Pakistan and Sri Lanka, most typically in ditches, lakes, ponds and paddy fields with stagnant water. Omnivorous in nature, they eat anything from leaves and flowers to snails, fish and frogs.

This is an Indian flap shell turtle, who (like many turtles) is hideous but wildly photogenic. He has something called “femoral flaps” which sounds revolting. pic.twitter.com/F7mjYcxu2Z

While a normal-coloured flap shell turtle can easily camouflage itself in the murky, greenish water, its golden-coloured variant — a turtle with chromatic leucism — is easily recognisable and therefore more vulnerable. Its luminous golden colour, in particular, makes it a prized pet.

Albinism and leucism in turtles

The congenital disorder of albinism creates a complete absence of pigmentation in the skin, hair and eyes due to the lack of tyrosinase, an enzyme involved in production of melanin. Researchers estimate that albinism occurs once in every 10,000 mammal births.

Leucism, on the other hand, is an extremely rare genetic condition in which animals have reduced pigmentation. Most luecistic animals have normal-coloured eyes, whereas those with albinism tend to have red or pink eyes.

Though turtles play an important role in reducing pollution by feeding on insects, vegetation and dead animals, factors like habitat loss, fragmentation and degradation have been threatening their survival.

According to Turtles of Nepal – A Field Guide for Species Accounts and Distribution, the draining of wetlands for irrigation and fishing, the excessive use of agro-chemicals which eventually seep into waterways, and unsustainable fishing methods all negatively impact turtle populations.

Adding to their woes is the illegal trade for keeping turtles as pets, as well as their use in traditional medicine. Some people believe in eating turtles and their eggs to achieve improved health, longevity and virility. Turtle shells are also used to make curio items.

Despite such threats to Nepal’s turtles, conservationists and other local bodies, such as the Turtle Rescue and Conservation Center in eastern Nepal, have been working to save these magnificent creatures.

2020-08-08
Previous Post: In Pakistan, a man accused of blasphemy was shot dead in a courtroom. His killer was hailed as a hero. · Global Voices
Next Post: Hong Kong media tycoon Jimmy Lai arrested under national security law · Global Voices