John Weeks: a leading critic of economic orthodoxy who dedicated his life to building a better world 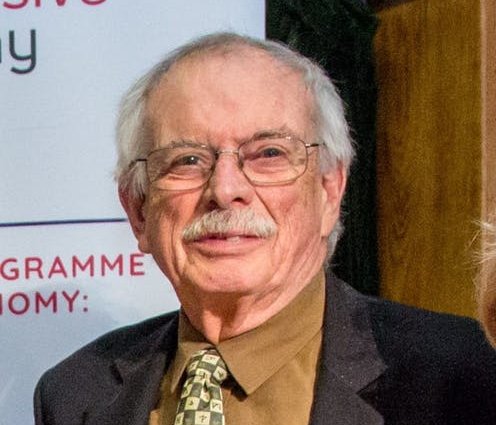 John Weeks, Emeritus Professor of Economics at the School or Oriental and African Studies (SOAS), has died aged 79 from leukaemia.

In the almost 15 years since retiring, he focused on popularising radical economics, achieving it with considerable aplomb, through the (social) media and publishing Economics of the 1% (2014) and The Debt Delusion: Living Within Our Means and Other Fallacies (2020). His journey to this success sheds light both on the challenges facing revolutionaries of his generation, and contemporary capitalist economies, developing as well as developed.

Born in Texas of an accountant father and shop assistant mother, the seeds of radicalism were sewn by virtue of the blacklisting of his father for blowing the whistle on corruption in the state government’s relationship with the powerful oil industry. Such perspectives on the abuse of power (and sleaze) within his immediate locale were reinforced by direct experience of overt racism in the segregated US south. There, Weeks joined campaigns to break colour bars and promote civil rights whilst still an undergraduate at the University of Texas.

Early exposure to racism, and the struggles against it, informed a more general opposition to authority, allowing him never to forget that far from being benign, under capitalism democracy and freedom only extend as far as they are struggled for and for whom. This has been strikingly brought to life recently by the Black Lives Matter Movement, decades after white supremacy had been seen by too many as something mainly confined to the past.

On a different plane, Weeks himself would later come to the attention of Accuracy in Academia (AIA), an American organisation committed to driving left-leaning scholars out of teaching. In 1985 he was placed on the AIA list of “dangerous” academics, making him persona non grata at many US universities.

Read more:
Why did Europe lurch right? Because the ‘recovery’ is a farce


Weeks went to graduate school at the University of Michigan to study for a PhD in economics. His greatest wish was to leave Texas and never go back, except for occasional family visits, and his wish came true. At Michigan he became active in the anti-Vietnam war movement, and like many men of his generation joined the US Marine Corps Reserves to avoid the draft. More grist to the mill of radicalism.

For his PhD, he studied the roots of industrialisation in Nigeria, first serving as an associate at the University of Ibadan and then teaching Economics at Ahmadu Bello University in Zaria, in the Northern region, opening windows onto the African post-colonial condition. After a short interlude at the School of African and Asian Studies, AFRAS, University of Sussex, he joined the Economics Department at Birkbeck College, University of London, in 1972. That is where he began to engage fully with Marxist economics for the first time.

Within a few years, though, he married Liz Dore, and willingly put his career on hold to join her on her fieldwork in Peru, an opportunity to extend his expertise – leading to the publication of his first book The Limits to Capitalist Development: The Industrialization of Peru, 1950-1980.

In 1977, he returned to the US to take a job at the American University (AU), in Washington, DC, in one of few departments specialising in heterodox economics. Here he published his highly influential take on Marxist economics, Capital and Exploitation, emphasising how capitalism is subject to crises precisely because of its strengths and successes rather than because of its failings and weaknesses.

Read more:
Coronavirus will drive public debt far higher than expected – but that doesn’t mean a return to austerity


Forged out of relations with international students at American University who were involved in anti-colonial and anti-capitalist movements in their home countries, Weeks and Dore were invited to serve as advisers to the Sandinistas, who had come to power in Nicaragua in 1979. This proved a mixed experience. Advice was unwelcome if joined with critical analysis and Weeks shifted institutional affiliations in Nicaragua to find a home with which he was comfortable.

He was then forced to return to his post at AU to resume his duties there as well as care for what were then two three-year-old children. Dore remained for several months longer in Managua. In the meantime, he published The Economies of Central America. From AU, he took a job at Middlebury College, Vermont, where John and Liz struck up an acquaintance with Bernie Sanders.

Ultimately, in 1990, the School of Oriental and African Studies (SOAS) University of London invited Weeks to establish a new Department of Development Studies. This was an offspring of the heterodox economics department, one of the few in the UK and remaining one of the leading in the world. From there he retired as Emeritus Professor in 2006, having played leading (and headship) roles in establishing and strengthening political economy in both departments.

The invaluable threads running through all of John’s experiences and contributions have been to situate development globally and not as a national challenge alone; draw upon Marxist political economy for its insights into development and transformation to and within capitalism, not least in light of class analysis; and understand the exercise of power and the power of resistance and how these combine to inform the logic of capitalist development. John exposed and fiercely rejected the fallacies of orthodox economics, and proposed pragmatic, immediately realisable, policy alternatives in support of progressive movements.

Read more:
Ending austerity: why public spending is key to building a stable and fair economy


Radicalisation around opposition to the Vietnam war gave birth to a new wave of radical economics, and John Weeks definitely rode that wave, contributing to the founding of Union of Radical Political Economy (URPE) in the late 1960s. Hopes for a better world were dashed by monetarism, releasing the globalised, financialised, neoliberalised world of today, with an ineffectual mainstream economics as its counterpart.

Despite the global financial crisis of 2007-08 and the current pandemic in which the state has made an interventionist comeback of astonishing proportions, mainstream economics has become more dominant and increasingly intolerant of alternatives. For this reason, the lives and works of those who have stood out against the tide of orthodoxy, with Weeks a leading figure, must be respected for their commitments against establishment dismissal but, more importantly, remain invaluable as the basis for constructing alternatives for the future.

This article was originally published by Open Democracy.