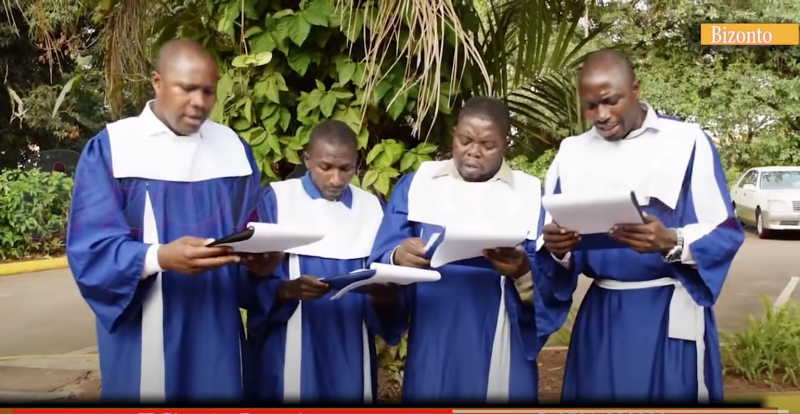 A YouTube screenshot Bizonto Comedians appearing in the skit that got them arrested.

The Ugandan police arrested four comedians of the Bizonto Comedy Group at Radio Simba, where they work, on Friday, July 24.

The arrests came after the comedians released a YouTube comedy skit on July 15, that satirized ethnic and regional appointments in Uganda, and went viral on social media with over 20,000 views. In the video, they criticized the imbalance in government’s appointments to top security, electoral and financial governance positions in the East African nation.

The comedians’ jab at lopsided, ethnically motivated government appointments caused a stir within some government circles when they noted that key security and finance positions are occupied by Ugandans from the Western region — and President Yoweri Museveni hails from the same region.

In a statement, the police accused the comedians of sectarianism and for “causing hatred and unnecessary apprehension.” The police also described the video as an “attack on government” and the comedians as “errant characters” capable of “grave threats to the security and stability of the country.”

All four comedians —Julius Sserwanja aka “Kidomoole,” Mbabaali Maliseeri aka “Uncle Luyuugumo,” Ssaabakaaki Peter aka “Omuzinyuuzi” and Gold Ki Matono aka “Opeto,” are currently detained at the Uganda Police Criminal Investigations Department, without charges and expected to be presented in court the week of July 27, when their charges will be read and their fates will be determined in terms of bail or prison time.

NTV Uganda reported on the case, with testimonies from Radio Simba employees who witnessed the arrests:

Much ado about a comedy skit?

In the skit, the comedians began by criticizing Jane Ruth Aceng, Ugandan health minister, who was captured on camera speaking without a mask during a political rally on July 11, in the northern Uganda district of Lira, where she plans to run for a seat in parliament. Ugandan President Yoweri Museveni made wearing masks in public mandatory due to the coronavirus and has banned all public gatherings like political rallies, religious gatherings and schools, to mitigate its spread.

The comedians satirically stated that they would be taking time to teach children about the leaders of their country and encourage them to pray as the country approaches the general elections slated for February 2021.

The four comedians asked Ugandans to educate their children about these people. They also encouraged citizens to pray for these leaders since they have a huge task ahead of organizing a free and fair election. The Bizonto Comedy Group satirically joked that these key government officials may have the daunting task of advising President Museveni to relinquish power should he lose in the upcoming elections.

Their arrest comes at a time when the government has also passed regulations to control the creative arts industry. These regulations have been perceived as punitive, wilting down a vibrant creative industry where Uganda’s biggest opposition leader, Kyagulanyi Robert Sentamu, known by his stage name, Bobi Wine, got his start.

Bobi Wine has been denied the right to perform on stage for two years, ever since he won a seat in parliament. Wine is one of the major contenders against President Museveni, who has ruled Uganda for the past 35 years.

‘Practice tribalism’ and arrest those who criticize tribalism

Ugandans have commented about the arrest of the four comedians online.

In Uganda, those who practice tribalism are arresting those who talk about tribalism and charging them with promoting tribalism. Hypocrites!#FreeBizonto#FreeTheArts

Other comedians recorded a parody skit where they place the different leaders highlighted by Bizonto in different regions of the country to simply send out a message that the Bizonto comedians never lied in their skit.

Twitter user Segawa shared a collage showing the people that Bizonto talked about to further indicate that there were no lies or wrongdoing.

Problem is; my fellow westerners are scared of talking about regional imbalance yet they’re also suffering.

My friends, the people holding & controlling this country are less than 20. Just speak ba dear.#FreeBizonto

Twitter user Buffalo Soldier recalls how he was tortured because of his tribe:

“I was tortured by high-ranking security officers from W Uganda on account of my tribe; nothing was done to my torturers. It can’t be that when I speak against or expose tribalism, I’m in the wrong. If you don’t want us to speak against tribalism, don’t practice it.”#FreeBizonto pic.twitter.com/XQrLeZ6Ww5

one last thing before i say gdnite. On behalf of the Art Industry please #FreeBizonto pic.twitter.com/wZKgTMYBRJ

In Uganda, it is common to beat up and arrest journalists, ban radio and TV shows, close media houses and attempt to shut anybody that comes out to speak against the wrongdoings of the current government.