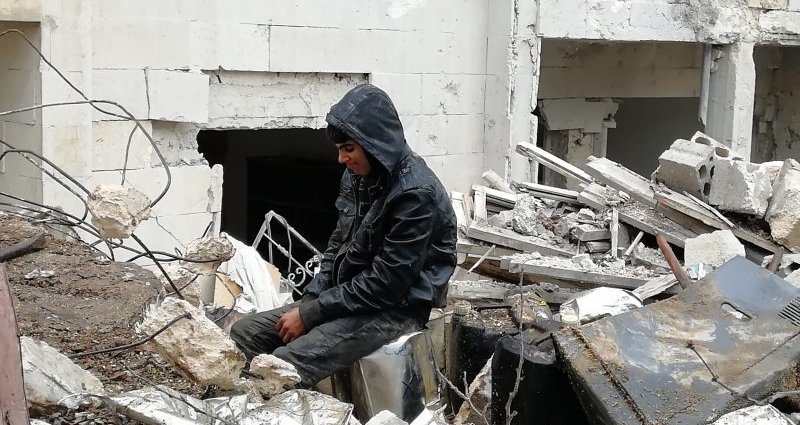 Residents of Idlib enduring the impossible even without COVID-19

Photo of the northern Syrian city of Idlib, shortly after a Russian missile strike destroyed a neighbourhood on March 14, 2019, resulting in the deaths of 10 civilians. The young man pictured told the photographer that he had just lost his family. Photo by Mousa Mohammed, used with permission.

The ongoing armed conflict in Syria has displaced over 1.6 million people who have fled mostly to the north of the country. The resulting catastrophic humanitarian crisis is now worsened by the impact of COVID-19 in the region.

In the Idlib region in northern Syria, residents already endure drastic conditions on a daily basis. Although Idlib has confirmed only one case of COVID-19 in July, many factors contribute to rising tensions, one of which is the continuing and deliberate violence inflicted on Idlib’s vital infrastructure by the Syrian-Russian military alliance which has completely destroyed its health sector.

According to Human Rights Watch, “northern Syria is not at all ready to face the ‘COVID-19′ pandemic.”

Hani al-Hariri, an activist from southern Syria now living in Idlib, told Global Voices that the situation could be catastrophic if COVID-19 reaches northern Syria, where displaced people barely have access to basic needs, including health care, water, and food, making social distancing and hygiene almost impossible to maintain.

In Idlib, children often pay the heaviest price of war. The war has driven approximately 190,000 orphaned children to the streets to fend for themselves among the ruins of Idlib. In total, an estimated 290,000 children have been repeatedly displaced by violence in northern Syria alone.

Jamil al-Hassan, a Syrian activist and journalist from Idlib, has been conducting humanitarian work for years in rebel-held regions. He talked to Global Voices about some of his experiences. The names mentioned in his testimony have been changed to protect their identities:

Ahmad, Salah, and Abdullah are three children under the age of ten from Aleppo and Idlib, who lost their families in a war that began in 2011, almost 10 years ago. Left with no one to depend on except each other, their only refuge has been on one of Idlib’s sidewalks. I met them during one of my daily tours of the city, and shared a video on my Twitter account hoping to find a way to help them.

Here is the video mentioned by Hassan:

Displacement of children, whatever the causes, is the displacement of innocent children through no fault of their own. Support them.

Hassan added that the situation in northern Syria is catastrophic, and would get much worse with the spread of COVID-19. He explained:

Children sleeping in the streets has become a frequent sight. While all of Idlib’s residents face a critical situation, children living on the streets are particularly at risk when the coronavirus starts spreading as there is no way to protect them.

The humanitarian disaster in Idlib has been the result of a series of military campaigns led by countries supporting the government of Bashar al-Assad: Russia, Iran on one side, and Turkey on the other side, which shifted from initially backing the Free Syrian Army, an opposition force founded by Syrian military defectors, to becoming its own player in the conflict in August 2016.

Idlib is the last stronghold of rebels and jihadists trying to overthrow the Assad government that now controls almost 64 percent of Syria. It has been under the control of a number of rival opposition factions since 2015. The region is home to more than 4.5 million people, including nearly 1.6 million internally displaced refugees, mostly women and children, who have come from various provinces throughout Syria.

These repeated campaigns have caused unfathomable suffering to Syrians.

Hundreds of civilians have been killed and nearly one million people forcibly displaced in Idlib, and surrounding areas, just between December 2019 and March 2020, due to indiscriminate aerial bombardment, ground shelling, arrests, torture, and pillaging, according to a report published on July 7, by the UN Syria Commission of Inquiry. The opening remarks of the report can be read in this tweet:

Between December 2019 and March 2020, displaced people took refuge in overcrowded camps along the Turkish border, north of Syria, for protection. In these inhospitable places, refugees have been exposed to sub-zero-degree temperatures in Celsius throughout winter, crowding together in tents and makeshift shelters in what UN Secretary-General for Humanitarian Affairs Mark Lockock described as the “biggest human horror story of the 21st century.”

In a June 28 phone call with Global Voices, Hariri, who volunteers for an organization that brings together the people of Daraa, northern Syria, said that “tents do not protect from the heat of the summer or the cold of winter.”

Living in these tragic conditions in the tents is disastrous, because they [are] uninhabitable, [and] they are considered a temporary emergency solution for those who lost their homes.

Incidents of burning tents have been captured on social media:

A child was burned as a result of a tent catching fire in camp north of Idlib, near Kafrlosen. God please help.

Out of the pan and into the fire

Meanwhile, the nonprofit organization Save the Children revealed that more than 200,000 people, half of whom are children, have left the camps in northwest Syria to other locations or have returned to their destroyed homes. Prompted by the temporary cease-fire agreement that began on March 6, these families faced an impossible choice between confronting the virus or facing war.

Save the Children tweeted:

The plight of children and their families in North West #Syria is heart-breaking. They have had to escape intense fighting and are now forced to flee #coronavirus.

“They have nowhere to go but the rubble of their homes.” – Sonia Khush.

These families face dire conditions due to the harsh economic situation embodied by a staggering rise in food prices. These include the inability to access essential services like electricity, water, or the internet. Nevertheless, they continue to survive day-to-day, while facing an uncertain future amid a proxy war taking place on Idlib territory at the expense of innocent civilians.

While the world dedicates tremendous resources to fighting the pandemic, the Assad regime, in cooperation with its allies, have dedicated their own resources to killing, displacing and starving the Syrian people. With nearly 4.5 million people in Idlib still suffering from the war, they now anticipate the fallout from another inevitable humanitarian catastrophe.

2020-07-30
Previous Post: Wellbeing levels fell during the pandemic but improved under lockdown, data analysis shows
Next Post: Big advertisers are boycotting Facebook but it’s not enough to #StopHateforProfit – here’s why