Coronavirus: how countries aim to get the vaccine first by cutting opaque supply deals 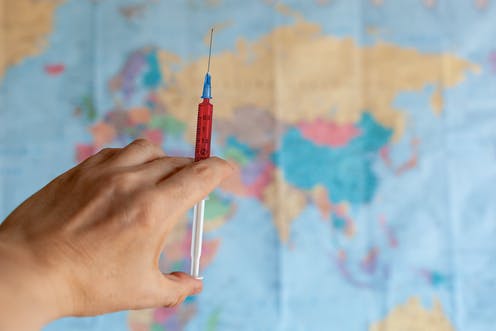 The University of Oxford recently published promising news about the results from the phase one/two trials of the vaccine it is developing for COVID-19. The clinical trials, involving 1,077 volunteers in the UK aged 18-55, showed that the AZD1222 vaccine appeared to be safe and generated the all-important dual antibody and T-cell immune response.

Yet as encouraging as this is, the public-partnership that underpins the project is a concern. Much of the funding came from the UK government, which announced a £65.5 million grant to the University of Oxford in March. Other funding had already come from outside the UK, including from the German Centre for Infection Research (DZIF) and the Oslo-based Coalition for Epidemic Preparedness Innovations (CEPI) so this was not solely a UK initiative.

Also in March, Oxford reached a licensing agreement with AstraZeneca to commercialise and manufacture the vaccine. But despite this work being largely paid for by the public purse, very little is known about the details of this partnership. There is a lot we don’t know about who will own the intellectual property, how it will be shared and at what price it will be sold. The same is equally true of numerous other public-private partnerships to develop a COVID-19 vaccine.

And while this global pandemic surely demands a globally coordinated response, governments have instead been clamouring to secure their own supplies of the vaccine.

If the Oxford/AstraZeneca vaccine proves successful, the company has undertaken to manufacture up to 30 million doses that will be available for people in the UK by September. This is part of an agreement to deliver 100 million doses in total that would be made available to other countries, but the UK will get access first.

In the same vein, the UK has placed advance purchase orders for two other vaccine prospects: 30 million doses for the one being developed by Pfizer and BioNTech, and 60 million for another from Valneva of France. Again, these agreements lack transparency. We don’t know, for example, whether the taxpayer will still pay if the drugs don’t work.

Read more:
Vaccine progress report: the projects bidding to win the race for a COVID-19 vaccine


We are seeing the same kind of approach elsewhere. In May, the US reached its own supply agreement with AstraZeneca for AZD1222. The Americans are investing US$1.2 billion (£942 million) in return for a 30,000-person vaccine trial in the US, and the manufacturing capacity to produce at least 300 million doses, with the first doses to be delivered as early as October. Similarly, the US has a supply deal with the Pfizer/BioNTech project.

Elsewhere, AstraZeneca has agreed to supply 400 million doses of AZD1222 to Europe starting from the end of the year through the Inclusive Vaccines Alliance (IVA), set up by Germany, France, Italy and the Netherlands.

When Ursula von der Leyen, the European Commission president, unveiled the EU vaccine strategy days later, reportedly to ensure that the union was not left behind in the vaccine race by big spenders like the US, she hailed the IVA as an important step towards joint action between the member states. Tellingly, there was no mention of access to AZD1222 for countries outside the EU.

For other countries, AstraZeneca announced a US$750 million agreement in June with CEPI and Gavi, the Vaccine Alliance, to make, procure and distribute 300 million doses of AZD1222 with delivery starting at the end of the year. AstraZeneca also signed an agreement with the Serum Institute of India to sub-license AZD1222 to supply 1 billion doses to low- and middle-income countries, with a commitment to provide 400 million by year end. In all cases, little is known about the terms of the agreements.

One important aspect of this lack of transparency concerns pricing. For example, the deals with the IVA and CEPI/Gavi say AstraZeneca will supply the vaccine at no profit during the pandemic. This leaves open the prospect that “no profit” will cease to apply if the World Health Organization declares that this is no longer a pandemic. Because the terms of these agreements have not been fully disclosed, we just don’t know.

Without doubting the commitment of AstraZeneca to its stated objective of broad and equitable access to this vaccine, these opaque agreements raise concerns about precisely how publicly funded research, conducted by publicly owned universities, is being privatised.

Other approaches are possible. Along with the UK funding package for the University of Oxford, the government also allocated £18.5 million to Imperial College London for a different COVID-19 vaccine project. Having completed clinical trials, Imperial announced on July 17 that it was proceeding to the next trial phase, involving 105 participants aged 18-75.

Imperial has formed a new social enterprise, VacEquity Global Health, to rapidly develop this vaccine and distribute it as widely as possible in the UK and overseas, including to low- and middle-income countries. This is in partnership with Morningside Ventures, a fund based in Hong Kong that invests in companies for the public good.

Rather than partnering with one company, the Imperial model envisages links with multiple manufacturers and waiving royalties and charging a modest amount for its vaccine. Agreements to purchase, manufacture and distribute the vaccine are still being negotiated.

It remains to be seen whether this social enterprise approach proves more successful in achieving equitable access to COVID-19 vaccines in the longer term, but it seems more in line with how we should be tackling this crisis.

Public money invested in publicly funded institutions should be treated as a public good, not as private intellectual property rights to be licensed and traded by private companies without full and proper public scrutiny. The vaccine nationalism that we have seen in the past couple of months only encourages this. At the very least, these agreements need to be fully transparent to address these concerns.

Duncan Matthews does not work for, consult, own shares in or receive funding from any company or organisation that would benefit from this article, and has disclosed no relevant affiliations beyond their academic appointment.