A man shows a burial site for the indigenous children. To the mothers, their children were missing. Photo: Emily Costa/Amazônia Real

This article was written by Emily Costa and Kátia Brasil for the Amazônia Real. It is republished by Global Voices under a partnership agreement.

On July 1, a mother of Yanomami ethnicity, and member of the Sanöma subgroup, received her daughter’s body in Onkopiu village, in Brazil, after a two-month wait. The baby died of hydranencephaly and septicaemia in a state hospital at Boa Vista, the capital of Roraima state. According to the state’s Medical Legal Institute, the body was kept all this time in a cold storage facility.

The reason for the delay, according to a document by Brazil’s Indigenous Health Secretariat (Sesai), to which Amazônia Real had access to, was that the mother had contracted COVID-19 and been hospitalized. The mother recovered from the illness. The child, though, was not infected, which would make the transfer to the village for the funeral ritual safe.

In another part of the document, Sesai informed that it could not make the transfer because there was no “flight scheduled to enter the territory of the relatives of the deceased”.

The situation is similar to that of other Yanomami mothers seeking the right to bury their children according to their traditions, faced with the funeral restrictions in place all over Brazil due to the new coronavirus pandemic.

Another three Yanomami babies, who died between April and May as a result of COVID-19, were buried in a private cemetery in Boa Vista without the consent of their mothers. For them, their children’s bodies were missing — they were located during Amazonia Real’s investigations for this report.

Junior Hekurari Yanomami, president of the Yanomami District Health Council, an agency attached to Sesai, said the Sanöma mother was aware that the child’s body was in the Medical Legal Institute and had asked to have the funeral ritual in their village.

“Even the communities are questioning it, calling, asking us to send [the body] as soon as possible,” he told Amazônia Real the day before the body was taken to the mother’s land. 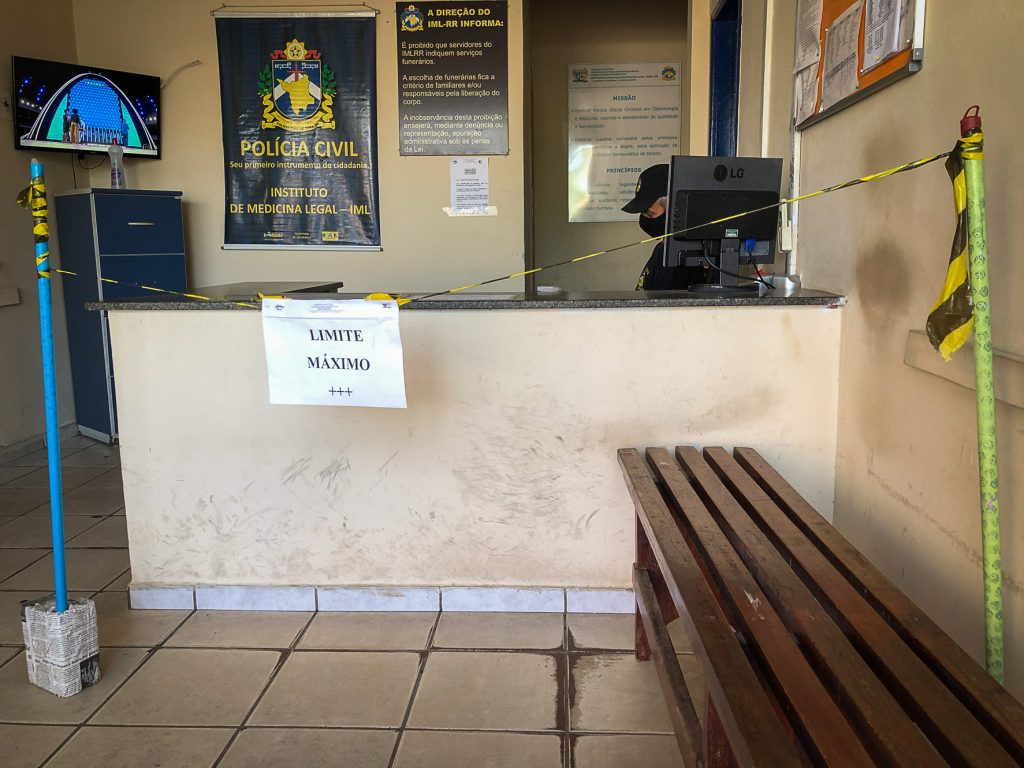 Amazônia Real’s reporters found information about the body of the Sanöma baby at the Medical Legal Institute of Roraima. Photo: Emily Costa/Amazônia Real

Amazônia Real asked Sesai for an explanation of why the child’s body had remained at the IML for two months, but received no answer.

The head of the agency, Robson Silva, visited the Yanomami land on July 1 with General Fernando de Azevedo Silva, the defense minister in Jair Bolsonaro’s government, and representatives of the National Indigenous Foundation (Funai). On Brazilian Air Force planes, they brought medical care, medicines, supplies, as well as teams of international journalists to the Yanomami communities.

On the same day, the child’s body was taken to the Onkopiu village, at 11 a.m., by plane — the journey took less than 2 hours from Boa Vista. The transfer only happened because the child did not have COVID-19, according to the Yanomami District Health Council.

Asked about the community’s reaction to receiving the body of the Sanöma child, Junior Yanomami said it brought them some comfort, but the whole community was in mourning.

This is not the first time health authorities have failed to inform Yanomami parents about their children’s burials in Boa Vista’s cemeteries.

The first case of the new coronavirus in the ethnic group was a 15-year-old boy in the town of Alto Alegre, also in Roraima, a region where there are a lot of rogue miners around the Uraricoera River. Although he had symptoms since March 18, he was only tested on April 6. Three days later, the young man died in a hospital in Boa Vista.

At the time, Dario Kopenawa Yanomami, director of the Hutukara Yanomami Association, said officials lacked respect and knowledge of traditional ceremonies of indigenous culture. The case was denounced at the Federal Prosecutor’s Office.

“The parents [even though they were in Boa Vista] were not informed of the funeral, this is wrong and we are questioning it,” he said.

For the French anthropologist Bruce Albert, burying a Yanomami victim without the consent of relatives shows a lack of ethics and empathy from the authorities. “Moreover, dealing with a dead person without traditional funeral rituals constitutes, for the Yanomami, as for any other people, an inhuman and therefore ignominious act”.

The Federal Prosecution opened a procedure to ensure the identification of the Yanomami bodies and subsequent return to their indigenous lands when it is sanitarily safe and if desired by their community of origin. Speaking with Amazônia Real, the office said it has been holding meetings with indigenous leaders and health representatives to discuss the burial of indigenous victims of COVID-19. The objective, it said, is “to align protocols with the objective of having greater communication, information and follow-up with indigenous people, but respecting the communities’ health to avoid risks”.

On June 30, Dario Kopenawa Yanomami said that the mothers were only informed where the babies’ bodies were “after a lot of criticism” and that “they were notified very late”.

On July 2, he travelled to Brasilia and met with Brazil’s Vice President, General Hamilton Mourão, and the indigenous legislator Joênia Wapichana. As well as talking about the Yanomami peoples’ fight against the pandemic, they also discussed the invasion of their territory by 20,000 miners. 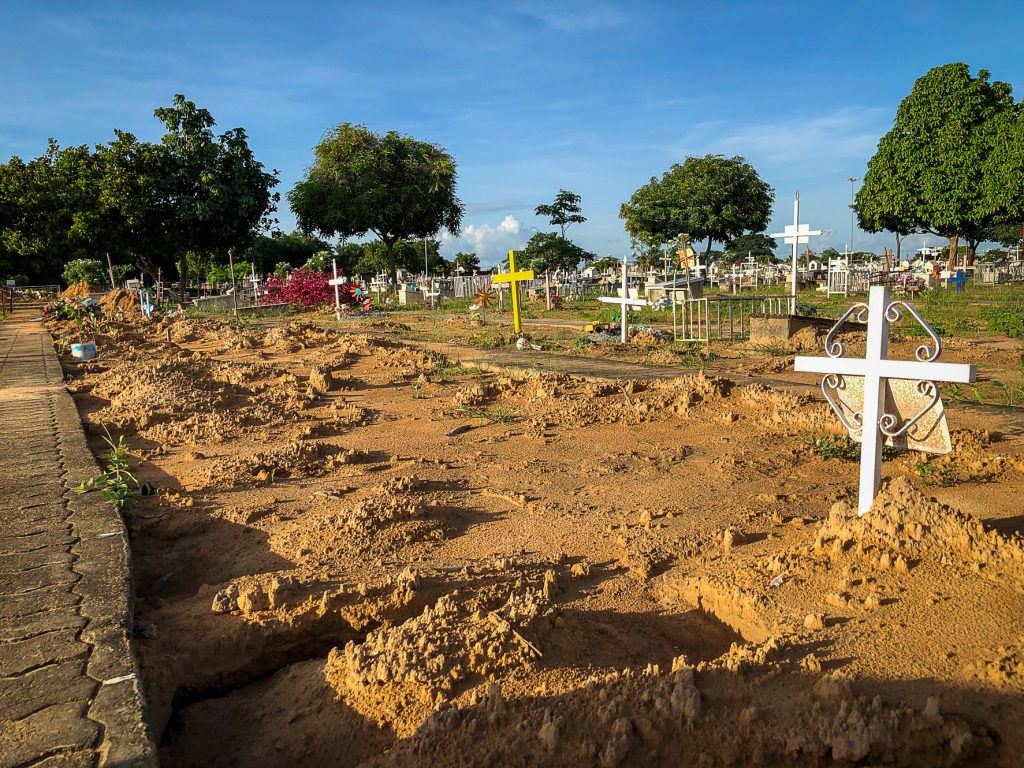 As well as the baby who was at the Medical Legal Institute, the report found the graves of three other Yanomami children for whom the mothers were searching. They are at the private cemetery Campo da Saudade in Boa Vista.

These three Yanomami mothers are still waiting for answers about when they will receive their babies’ bodies, so as to perform their funeral rituals in their villages. The babies died with suspected infection by the new coronavirus.

Sesai confirmed the cause of the deaths. One of the babies, a boy, died on April 29 in a hospital under the management of Roraima’s government. The mother also tested positive for COVID-19. The baby’s body was not buried until three weeks after his death, on May 20, according to documents accessed by this report.

The other two babies, two boys from the Sanöma subgroup, died on May 25 and were buried next to each other. One of them was two months old and died of acute renal failure and suspected COVID-19 infection in a hospital managed by Boa Vista city. The other was three days old and died after contracting an infection.

The risk of contamination because of the pandemic prevents the bodies from being removed from the cemetery at the moment. “It’s only possible to retrieve buried bodies by judicial means or by waiting for the minimum period before exhumation, which is three years for adults and two years for children and newborns,” said Anselmo Martinez, the manager of the cemetery where the children’s bodies are.

Since the first case of COVID-19 appeared among the Yanomami people, in April, more than 200 others have been contaminated in their territory, which lies in the Brazilian states of Roraima and Amazonas. Sesai’s most recent epidemiological report, dated July 15, reported that 262 Yanomami have been infected by the virus. Four deaths have been confirmed: the three babies and the 15-year-old.

2020-07-24
Previous Post: Sitting on the floor vs sitting on a chair – which is better for you?
Next Post: Marielle Franco case remains under state police without federal interference, rules Brazil High Court · Global Voices