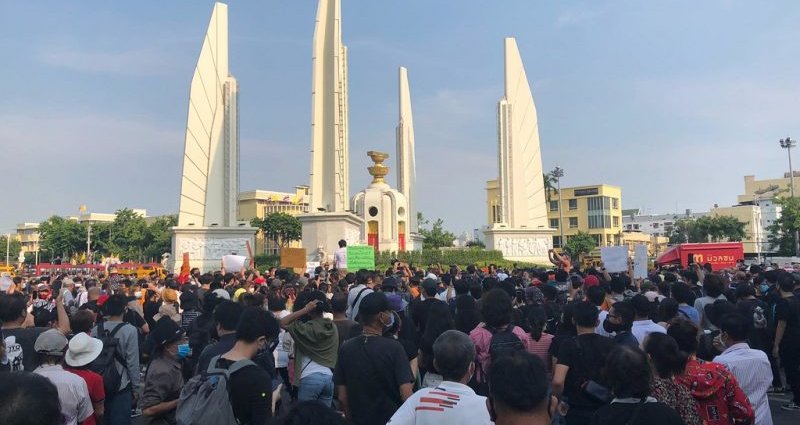 Protesters gathered at the historic Democracy Monument. Photo from Prachatai.

The student group Free Youth Movement organized a public demonstration at the Democracy Monument on the evening of Saturday (July 18) to protest against the government and call for the dissolution of parliament and constitutional amendments, and for the authorities to stop harassing citizens exercising freedom of expression.

Before the start of the protest at 5 p.m., more potted plants were added to the decorative garden surrounding the Democracy Monument, filling the space on the footpath. A row of uniformed police officers also stood behind the fence surrounding the monument.

READ MORE about Thailand’s political crisis, the rise of the military-backed government, and 2014 coup

A police crowd control unit was seen near the monument at around 6:30 p.m. while a Prachatai reporter also spotted a water cannon truck heading towards the protest site at around 7 p.m.

A large number of officers were deployed around the area, as well as stationed inside Satriwithaya School. At one point during the evening, protestors also shouted out that they saw officers on the upper floors of a school building.

Officers clashed with protestors early on in the evening as the group tried to remove the metal fencing placed around the protest area.

At 9:20 p.m., plainclothes officers attempted to take away two protestors, claiming that the content of their banner was an offense against the monarchy, but other protestors stopped them and forced the officers to leave the scene. 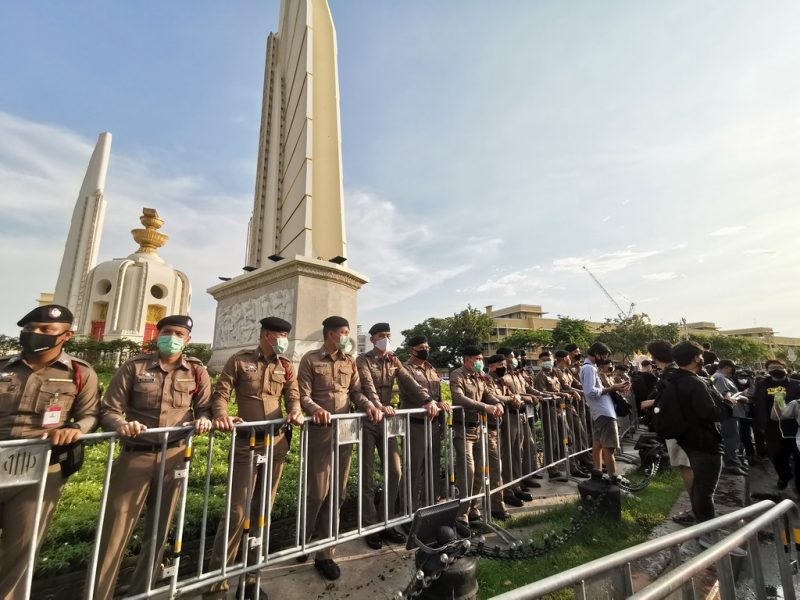 Uniformed officers stood behind the fence around the Monument. Photo and caption by Prachatai.

During the protest, student representatives took turns giving speeches, including Student Union of Thailand (SUT) President Juthatip Sirikhan, student activist Parit Chiwarak, and student activist Jatupat “Pai Dao Din” Boonpattaraksa, as well as a student from King Mongkut’s Institute of Technology Ladkrabang, who said that the 2014 coup reflected that the lack of people’s representation had damaged the rule of law and national prosperity.

Panupong Jadnok, one of the activists from the Eastern Youth Leadership group who protested in front of the DVaree Diva Central Rayong Hotel during Prime Minister Gen Prayut Chan-o-cha’s visit on July 15 also joined the protest.

Another summons was delivered to my house today. If you think that you can use these summonses to stop me, you think wrong. People like me are born only once and die only once. I was just holding up a sign saying ‘“Don’t let your guard down, dad’ and you can’t take it. If you can’t take it, then you shouldn’t be prime minister and should just resign.

Human rights lawyer Anon Nampa also gave a speech, leading protestors in a chant in support of political refugees either dead or living, prisoners convicted under the lèse-majesté law, and Tiwagorn Withiton, the Facebook user who posted a picture of himself wearing the viral “I lost faith in the monarchy” T-shirt and who was forcibly admitted to a psychiatric hospital last week. Anon said:

We are calling for the dissolution of parliament because this government came from an unfair election. After the election, the Future Forward Party was dissolved. We are calling for state officials to stop threatening citizens, to not be a slave to dictatorship, and to draft a new constitution, because no constitution anywhere gives a dictator the power to appoint 250 senators to vote for himself to be prime minister. That is shameless.

At 7 p.m., the organizers asked the protestors to turn on the flashlights on their phones and hold them towards the Democracy Monument. According to the organizers, this activity lasted 112 seconds.

At 8:45 p.m., representatives of the Free Youth Movement read out a statement, in which they make the following three demands:

-The dissolution of the Palang Pracharat-led parliament which has failed to handle the Covid-19 situation;
-An end to harassment by the authorities of people who are exercising their freedom of expression;
-The replacement of the current constitution, which favors the regime, with a new one which is meant for the benefit of the people.

They also announced that they will give the government two weeks to respond to their demands, or they will escalate their activities. 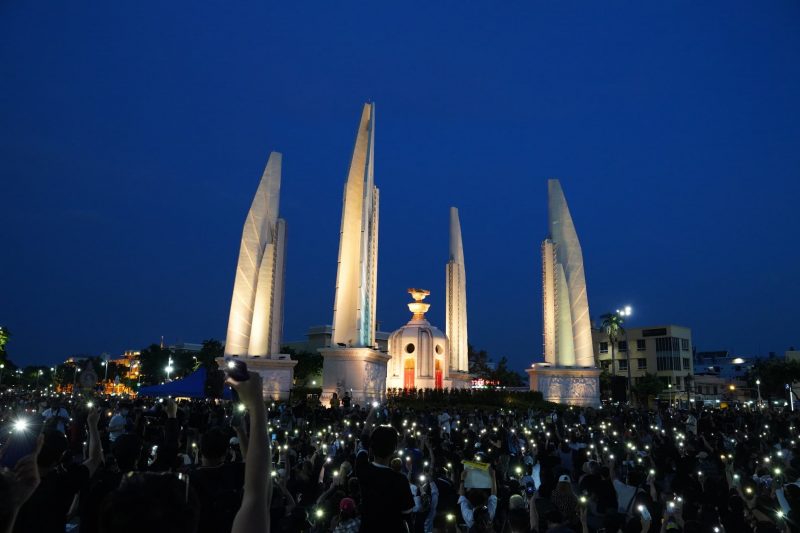 Protesters turning on the flashlight of their phones and holding them up towards the Democracy Monument. Photo by Prachatai.

The main protest took up about a quarter of the Democracy Monument roundabout, in front of McDonald’s and Satriwithaya School, and grew from around 500 protestors at the beginning to around 2,000. The hashtags #เยาวชนปลดแอก (#FreeYouth) and #respectdemocracyTH trended on Twitter, as they were used to share information about the protest.

Around 9:30 p.m., two men were seen running through the crowd and tried to tear down the organizers’ tent, causing a disturbance among the protestors before security personnel were able to control the situation and take the two men out of the area.

The organizers previously announced that they would stay at the Democracy Monument until 8 a.m. on Sunday (July 19). However, at midnight, they decided to conclude the protest for safety reasons. 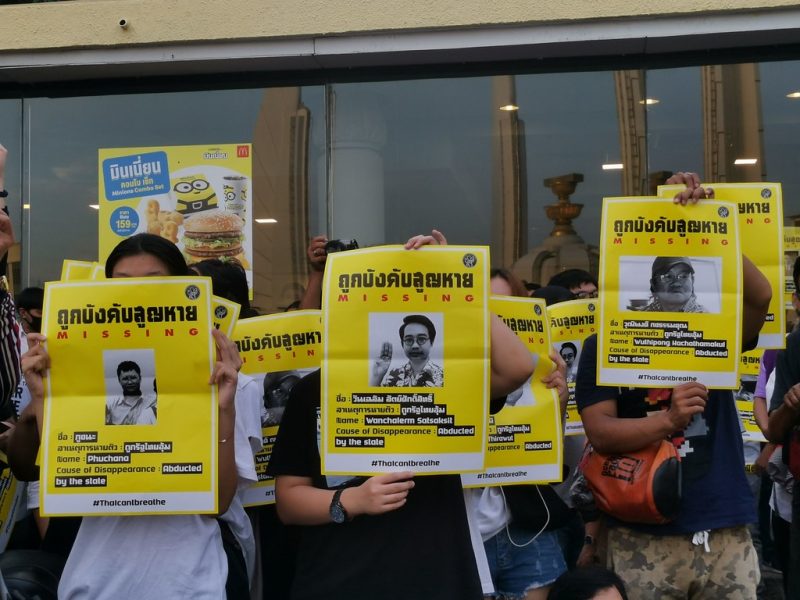 The “missing person” posters handed out by a group of members of Spring Movement. Photo and caption by Prachatai.