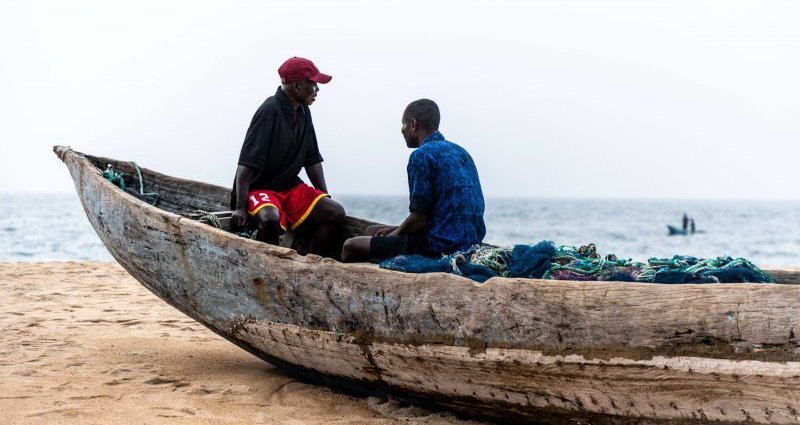 Granting fishing licenses to these massive trawlers will destroy livelihoods

The arrival of six Chinese supertrawlers in Monrovia, Liberia, last month has sparked outrage among the country’s small-scale canoe fishers.

These supertrawlers are capable of catching 12,000 tonnes of fish a year, which is about twice the nation’s sustainable catch of key species that local fishermen depend on for their livelihoods — potentially decimating vital fish stocks in just a few years.

Local community fisheries have joined The Liberia Artisanal Fishermen’s Association in calling on the government to consider the livelihoods and food security of coastal communities and reject the request for fishing licenses.

According to a joint statement released in partnership with the Environmental Justice Foundation (EJF), Liberian fisheries legislation only requires that these enormous vessels do not “threaten the sustainability of a fishery resource” in order to get licensed by the National Fisheries and Aquaculture Authority.

Fishing without a license comes with a fine of up to $1,000,000 United States dollars under Liberian Fisheries Regulations, but illegal fishing has long persisted in Liberian waters due to a lack of monitoring and policing.

We sincerely hope that the government will respect Liberian law and protect the interests of local coastal communities and our shared marine environment. Our waters support local jobs and provide good quality food, but granting these massive supertrawlers fishing licenses would destroy that.

In Liberia, about 80% of the people depend on fish for essential dietary protein and the sector provides full- or part-time employment for approximately 37,000 people, according to the joint statement.

When fishermen go out on local-style Kru canoes, they can catch an average of 500 kilograms per year. In comparison, the supertrawlers are capable of catching 2,000 tonnes of fish per year of key, bottom-dwelling species that are most important to fishermen. This is a direct threat to Liberians, many of whom already live with chronic poverty and food insecurity: Half of all Liberians live on less than $2 USD a day.

Some coastal counties, where the project’s target groups are based, suffer from higher levels of poverty and food insecurity, such as Margibi, Grand Cess, and Robertsport, where over 25 percent of households are food insecure, compared to 16 percent nationally, according to the joint statement.

To make matters worse, the supertrawlers have arrived amid the COVID-19 pandemic, which threatens to plunge millions of the world’s poorest into famine.

Over the last decade, we have worked extremely hard to stop illegal fishing and overfishing. We slowly see more fish for local fishermen to catch and women to process. These supertrawlers would unfairly compete for the same fish as local fishermen and reverse all of that progress. We are calling on the government to safeguard Liberian coastal communities by refusing fishing licenses for these vessels.

Liberia is now the third West African country to witness a sudden increase in Chinese industrial trawlers in the last six months. In fact, the arrival of these supertrawlers is a part of a major influx of industrial fishing vessels across West Africa, with many linked to China’s growing distant water fleet.

These six supertrawlers allegedly attempted to trawl in Mozambican waters before heading to Liberia, according to the joint statement.

“The growth of China’s industrial fleet in West Africa is deeply worrying. Many of these countries have small-scale fleets that are vital to local livelihoods, stability and food security. They have almost no chance of competing with supertrawlers that are able to hoover up a vast amount of fish and move on,” said Steve Trent, executive director of EJF.

In Senegal, 52 vessels applied for licenses in April, which would have put an enormous strain on local marine resources. In a victory for local fishers and sustainable fishing, these were rejected by the government on World Oceans Day.

In Ghana, three new trawlers from China still await a decision from the government, and local canoe fishers have stated their serious concerns.

Trent says that Liberia’s “National Fishing and Aquaculture Authority [NaFAA] has played a positive role in combatting illegal and unsustainable fishing,” and encouraged authorities to continue to safeguard Liberia’s fisheries.

This is not the first time that Chinese supertrawlers have attempted to fish in Liberian waters. For many years, small-scale fishing communities have fought against illegal and overfishing practices that have threatened livelihoods along with its rich marine ecosystem.

Foreign supertrawlers also come from other parts of the world, such as Russia and the European Union, according to a 2019 BBC report, but three-quarters of all foreign boats in West African waters are from China.

In 2010, Liberia established an “artisanal fishing zone” to protect the rights of canoe- and small-boat fishermen, which helped to replenish depleted fish quantities and improve the quality of the catch.

Small-scale fishing is an important source of jobs for people here in Monrovia, and across the country. In earlier decades, local fishermen could not earn a livelihood because of rampant overfishing, but in recent years things have improved. These supertrawlers would be a big step backwards — harming jobs and future food security.

For now, the six supertrawlers have applied for their fishing license and are docked in Monrovia port, awaiting the government’s decision.

2020-07-22
Previous Post: After the Russia report: how to protect British democracy from interference
Next Post: Coronavirus: We need to support domiciliary care workers before the second wave hits